As part of Stone Barns Center for Food and Agriculture’s Food Ed program, an increasing number of high school instructors across the country are teaching an academically rigorous food curriculum.

On a hazy afternoon in Midtown, a group of high school seniors prepare for finals. There are no slideshows or scantrons; instead, students cluster in small groups chopping vegetables, mixing batter, tasting sauces and neatly arranging food on a table covered with brown paper. A full semester of exploring the food system culminates here in what they call a “Mindful Meal,” a showcase of agricultural knowledge and culinary skill. The class is part of a new interdisciplinary curriculum called Food Ed. created by Stone Barns Center for Food and Agriculture and at the High School of Environmental Studies at 10th Avenue and 56th Street, it is the only one of its kind.

Though it’s an unrequired elective, the class is popular due to the hands-on nature of the kitchen labs that draw-in students who mistake it for “just a cooking class,” says instructor Andrew Margon. Margon is a ninth-grade English teacher who started teaching the course three years ago at a high school in the Bronx. He says the academic component sets the curriculum apart and its rigor keeps students engaged by using the food system “to analyze social problems, history, identity and the environment,” Margon continues, “challenging them to think differently about food.” 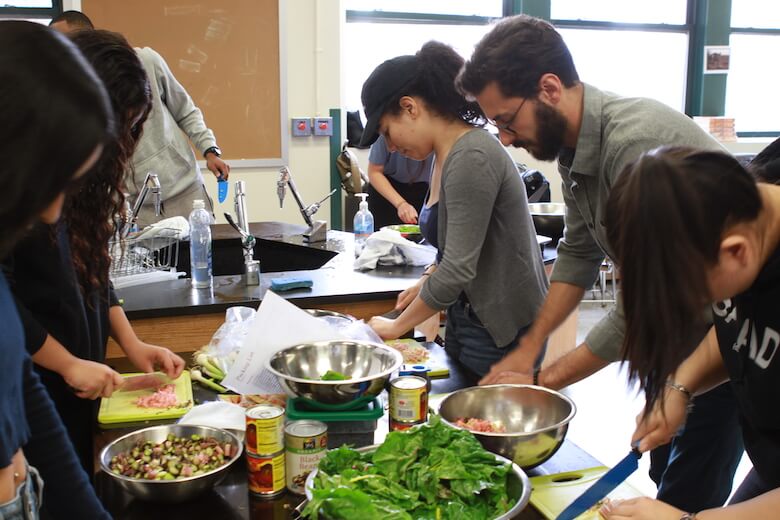 Stone Barns has the bold mission of aiming to change how the United States eats and farms, and they believe that a national food studies program is a crucial component. The Food Ed. curriculum is currently being taught, to greater and lesser degrees, by 21 teachers across the country, most of whom were trained last year. This summer, the free program has accepted 100 new teachers from 10 different states in hopes of establishing a national presence.

“We’ve been working on this program for four years,” says Sara Elliott, director of programs at Stone Barns. “When we looked at the food landscape, there was a real dearth of programming for high school students,” Elliott explains. She notes that while school food programming has skyrocketed in recent years, the majority of gardening programs and after-school nutrition classes target elementary- and middle-school-aged kids, ignoring a large demographic of “young people who are poised to make important decisions about their careers, what they’re going to study and how they’re going to feed themselves for the first time.” 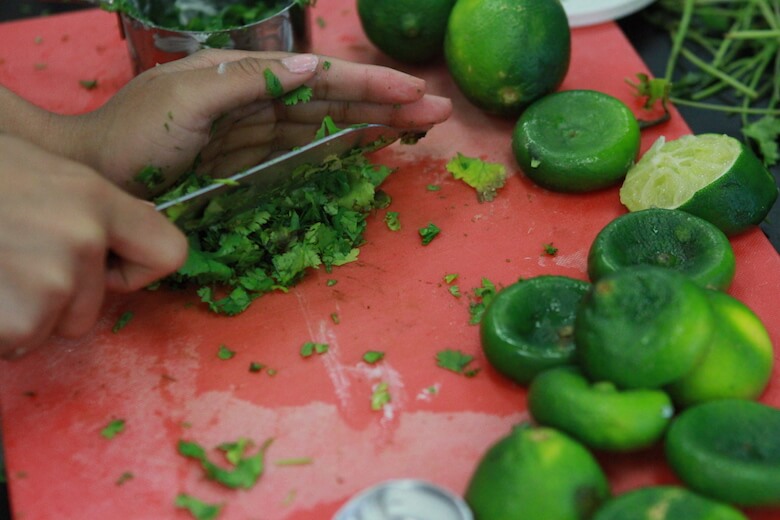 Stone Barns has the bold mission of aiming to change how the United States eats and farms, and they believe that a national food studies program is a crucial component.

But students don’t just learn how to feed themselves through Food Ed., they learn to help others. Sobering facts about food insecurity are coupled with opportunities for them to get involved in local food justice activism. In Margon’s class, students recently prepared and served a vegetarian meal to patrons of Chelsea’s Holy Apostles Soup Kitchen using “seconds” produce (slightly bruised or imperfect ingredients) donated by Stone Barns, GrowNYC’s Greenmarkets and Dig Inn. The event was successful and emotionally moving for many of the students. “I learned to value food cause some people don’t have any,” says a student named Franklin. “It felt good to feed people in the community who need it.”

Students had a voice in every level of decision-making, from selecting recipes and scaling them to feed over 100 people to designing flyers and distributing them throughout the community. Not only did the meal draw attention to food insecurity and its companion, food waste, it highlighted, through commensality or meal sharing, how nourishing vegetarian meals are and the importance of divesting from industrialized animal agriculture. “Before I took this class, I never knew about industrial farms and all of that,” says Sashi, another student. “Yeah, we learned in class about CAFOs and how harmful that is for our bodies and the environment,” her classmate Tiarah chimes-in. 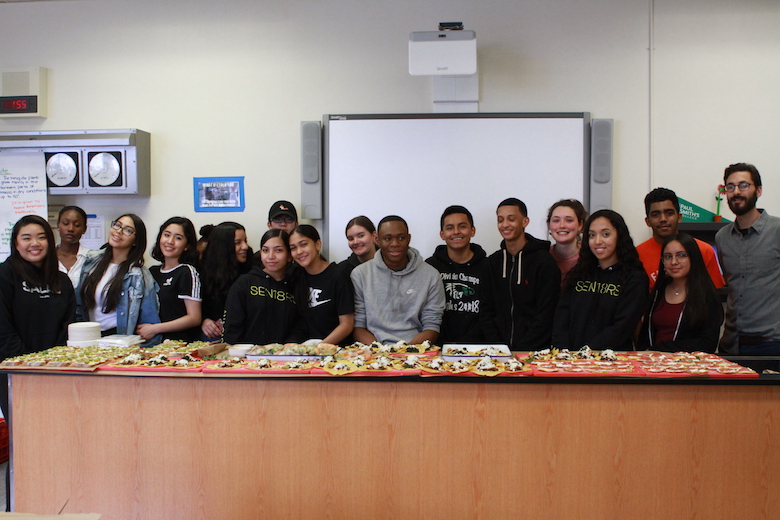 While preparing a vegetarian meal for a local soup kitchen, students had a voice in every level of decision-making, from selecting recipes and scaling them to feed over 100 people to designing flyers and distributing them throughout the community.

The curriculum isn’t vegetarian but it educates students about the destructive nature of industrial livestock production. “Students learn a lot about how most farms are growing food for animals and what a CAFO is, which is shocking to them,” says Kiera Foti, a Stone Barns educator who works closely with Margon’s class. “We try to show them that [meat] doesn’t need to be the center of every meal.”

For some students, the course influences more than their dietary choices; it shapes their future careers. “I’m going to college and I’m going to major in nutrition,” one student tells me matter-of-factly. “At first I was stuck and didn’t know what to do but with this class it kind of opened my eyes.”

For student Josmelvy, his group’s dish of corn fritters with rhubarb compote offers a rich landscape to think about colonization and agroecology. “Corn is one of the most subsidized products in the United States and is usually produced for its size not flavor,” he says excitedly. “Otto File corn, on the other hand, was bred by Native Americans to make the healthiest corn you can eat and it’s this beautiful golden-orange. You can taste it for yourself—it’s amazing!” Otto File was native to the Northeast before it was transported to Italy during the Columbian Exchange. According to Stone Barns senior communications manager Jessica Galen, when Stone Barns opened 14 years ago, someone from Italy mailed their farm director an ear of the heirloom corn and they’ve been growing it ever since. “It’s special for the students to be able to use this particular corn because, until recently, it was completely lost to the Northeast,” she says. 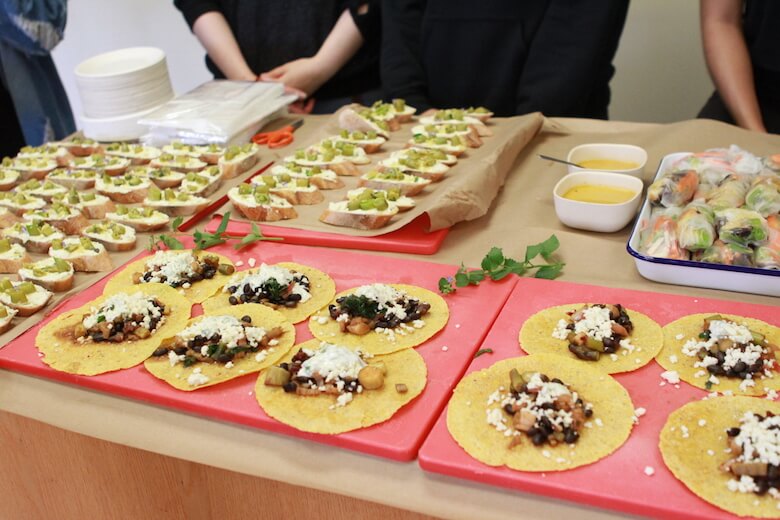 For some students, the course influences more than their dietary choices; it shapes their future careers.

By 2:00 p.m., the workstations are clean, the table is set, and a line of the students’ friends and teachers has formed outside the classroom doors. As their guests dine, each group presents their dish and explains the connection between their ingredients and an element of the food system they learned about. Some pause, looking down at index cards with notes scratched onto them. Others speak with more confidence. All seem genuinely excited.

Beyond choices like eating less meat or cooking more local vegetables, if the point of the course is to shift their perspectives on an individual level, it’s clearly successful. “We want them to be food citizens,” says Lindsey Dayton, a Stone Barns teacher trainer. “They’re high school students so they’re quick to draw the line from individual to the collective and they think about how they can change things on a larger scale, which is beautiful.”

Photos courtesy of Stone Barns Center for Food and Agriculture.