The NYC Good Beer Passport returns, giving drinkers 45+ full-size beers or flights at participating locations for only $35! Read on to learn how you can even win a FREE passport before June 26. 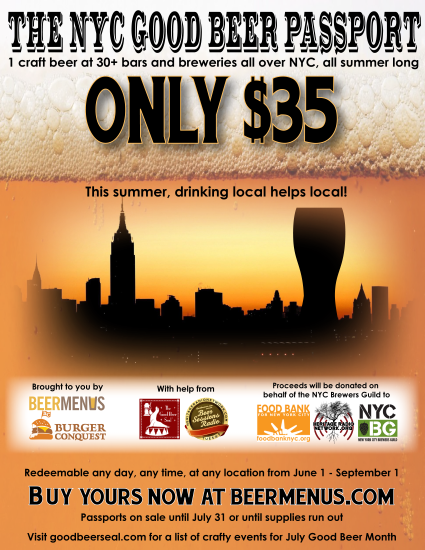 July is Good Beer Month in New York City! Mayor Bill de Blasio will continue tradition and issue the sixth consecutive proclamation for the monthlong celebration organized by Jimmy Carbone, owner of Jimmy’s No. 43 and co-founder of The Good Beer Seal: a Michelin Guide-inspired distinction aiming to recognize the best independently owned, beer-dedicated, community-committed bars in New York City (and now beyond, as the committee inducted gems in Jersey City and Long Island in 2013).

Good Beer Month will feature a slew of events throughout the five-borough metropolis, including our annual eponymous extravaganza at 82Mercer on July 31, where new members of The Good Beer Seal will be inducted. The NYC Good Beer Passport, presented by BeerMenus and Burger Conquest, also returns, giving drinkers 45+ full-size beers or flights at participating locations for only $35!

By purchasing a passport you’ll get one full craft beer or a flight of craft beers (where flights are offered) at every participating location. You can use them any day, any time from July 1 — September 1. While you’re out enjoying the passport, remember to drink local and try beers from the New York breweries.

Your purchase of the The NYC Good Beer Passport, on behalf of the NYC Brewers Guild, will in part go to benefit the Food Bank for New York City, as well as the Heritage Radio Network, home to Beer Sessions Radio.

When purchasing a NYC Good Beer Passport, choose the location where you would like to pick up your passport. Passports are available for pick up from July 1 — August 1.

Here’s the break down:

1. Buy a ticket for the location where you would like to pick up your passport.
2. Pick up your passport at the location you chose any day from July 1st through August 1, 2014.
3. Bring your passport to each of the 30+ participating locations any day from July 1 — September 1, 2014 and choose one full pour draft beer from a NYC Brewery (where available) or one (1) flight of four (4) 4 oz draft samples (where available) at each location.
4. Please remember to tip your bartenders as gratuity is not included!

Bars, breweries, beer stores and restaurants interested in participating in the passport should reach out to Rev Ciancio before June 20 at there [at] yeah management [dot] com.

Want to win a passport? Tweet Niko your favorite participating bar or brewery and why at @Krommydas. He’ll select a winner by June 26.

1. Must be 21 years or older with valid ID
2. 1 passport per person
3. Misplaced passports can not be replaced
4. Offer is not shareable
5. Flight option is where & when available