This Podcast Has Been Changing the Conversation Around Race and Food

And now The Racist Sandwich Podcast has launched a Kickstarter campaign to create an even more exciting second season. 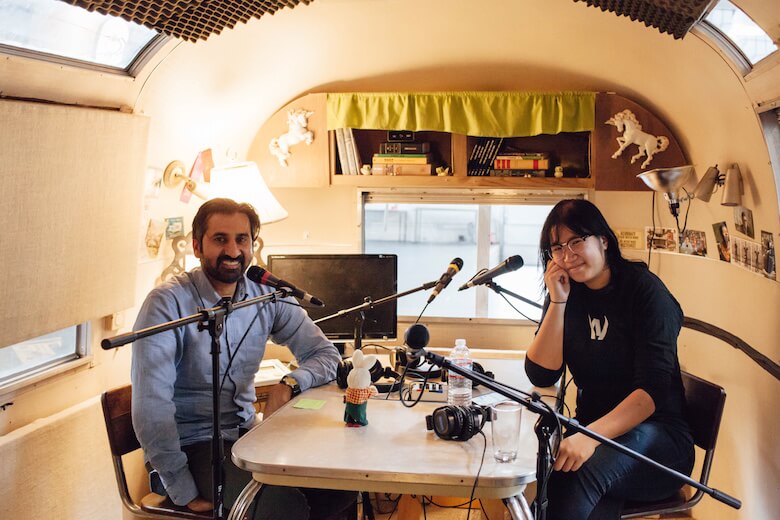 The hosts of the Racist Sandwich Podcast met in Portland, Oregon. Photo by Celeste Noche.

Soleil Ho and Zahir Janmohamed met in a way that almost foretold their future collaboration: a dinner party for creatives of color in Portland, Oregon.

“After talking at length about the rather appropriative restaurant scene in the city (with restaurants like Pok Pok, Bollywood Theater and Por Que No? being unquestionably more popular than their PoC-owned counterparts),” Ho tells us over email, “Zahir brought up that it could be really cool to do a podcast about food and race. We expanded the idea to include a more intersectional lens, with gender and class issues folded in as well.”

Since that fateful night, they (along with their producers) have been absolutely essential to conversations about the necessity to broaden perspectives in food media. On recent editions, they’ve discussed the origin of the word “curry”; had restaurateur and writer Jen Agg on for an episode titled “Only White Men Get to Be Geniuses”; and talked with Bay Area chef Preeti Mistry. The programming runs the gamut: Not only are you hearing about food directly, along with those intersecting issues, but you’re also listening to poetry or learning about photography.

To make their second season even more compelling than the last, they’ve launched a Kickstarter campaign. We talked to Ho (a recent Edible Manhattan contributor) to get a better sense of what to expect from future episodes.

Edible Manhattan: How do you select your guests—do you start with topics and find guests, or do the voices you want to feature drive the conversation? From poets to chefs to photographers, the choices really run the cultural gamut and create a broad perspective on food.
Soleil Ho: We and our producer (formerly Alan Montecillo, now Juan Ramirez) have a constantly updated wish list of guests. Zahir tends to be really into the more literary guests—he reached out to Viet Thanh Nguyen, for example. And I’ve done my best to seek out chefs and other food folks to bring onto the show. We’ve also pursued some guests for explicitly concept- or current events-driven pieces, like the food photography episode with Celeste Noche or the fat acceptance one with Virgie Tovar.

EM: What are you looking forward to featuring in season two that you haven’t been able to cover thus far, and how will the Kickstarter campaign help with that?
S.H.: We’re really excited to raise the funds to get more ambitious with our format and scope! We plan to use the money to hire a second producer to bring a fresh outlook to the show and hopefully shape it into something recognizable but exciting to listen to. We’ll also take more opportunities to travel to other cities in North America to pursue new stories. We’ve been invited by a friend to record a community dinner at the American Indian reservation where he lives and works, for example—it would be an amazing audio segment and meeting the folks there would be wonderful, but we currently don’t have the funds to do that.

EM: The podcast is very critical of mainstream food media on Twitter. Do you have any hopes for the industry in 2018? What would you like to see change?
S.H.: We are! Hahahaha. Fun fact: when the tweets are especially rude, they’re probably by me (Soleil). I’ve been waffling over this question, but I think Zahir and I do have hope for food media. Otherwise, there’d be no point to what we do: We could just wash our hands of it and go do something else with our time. But the thing is, I think food media is starting to listen to us. They respond when we call them out online, and we’ve become acquainted with more than a few food writers and editors who are working within the machine to make it a better place for everyone to participate in.

Here’s a short list of what we want to see change: less centering of white coastal bourgeois perspectives as the default; more writers and editors of color on mastheads; less culinary erasure of indigenous cultures like Native Americans, Australian Aborigines, and Palestinians; less fetishization of traditional foodways for the sake of trendspotting; less centering of chefs and restaurant owners, because other folks in the food industry have opinions that matter, too.