Robert (our cover model for the July/August issue) and colleague Dwan are now both active in the Hort’s GreenTeam, the paid-internship follow-up program that helps transition participants back into their communities. 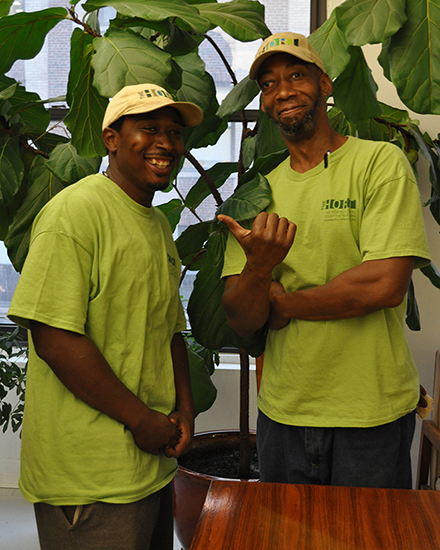 Edible Manhattan is pleased to have received an update from the Hort on the well-being of students in the GreenHouse jail-to-street prison garden program on Rikers Island, featured in our July-August 2013 cover story.

Our cover model, Robert (left), here smiles along with colleague Dwan, also profiled in the story. Both are now active in the Hort’s GreenTeam, the paid-internship follow-up program that helps transition participants back into their communities while providing continued horticultural training and job placement services.

Hilda Krus, director of GreenHouse, reports a great harvest this year and says they’ve been contacted by numerous organizations across the U.S. who were inspired by Edible’s story and hope to start similar programs of their own, most recently, according to Krus, from “a teacher in Alabama who uses the article in her church to advocate for therapeutic programs in prison.”

Plus, more stories of successful prison gardens have been in the media of late, including an inspiring ABC segment that states “Dozens of prisons across the country are now turning to gardening as authorities rethink their old strategies of warehousing prisoners instead of rehabilitating them,” and which points to the drop in recidivism rates among those taking part.

Meanwhile, our friends over at Food Tank are reporting on jail gardens in Texas and Chicago that provide inmates the opportunity to give back to the community, often in the form of fruits and vegetables.

We say, may there be food justice for all.