American Catch landed this summer and in it, Paul Greenberg lays painfully plain how our own seafood is on the brink of becoming “the one that got away.” 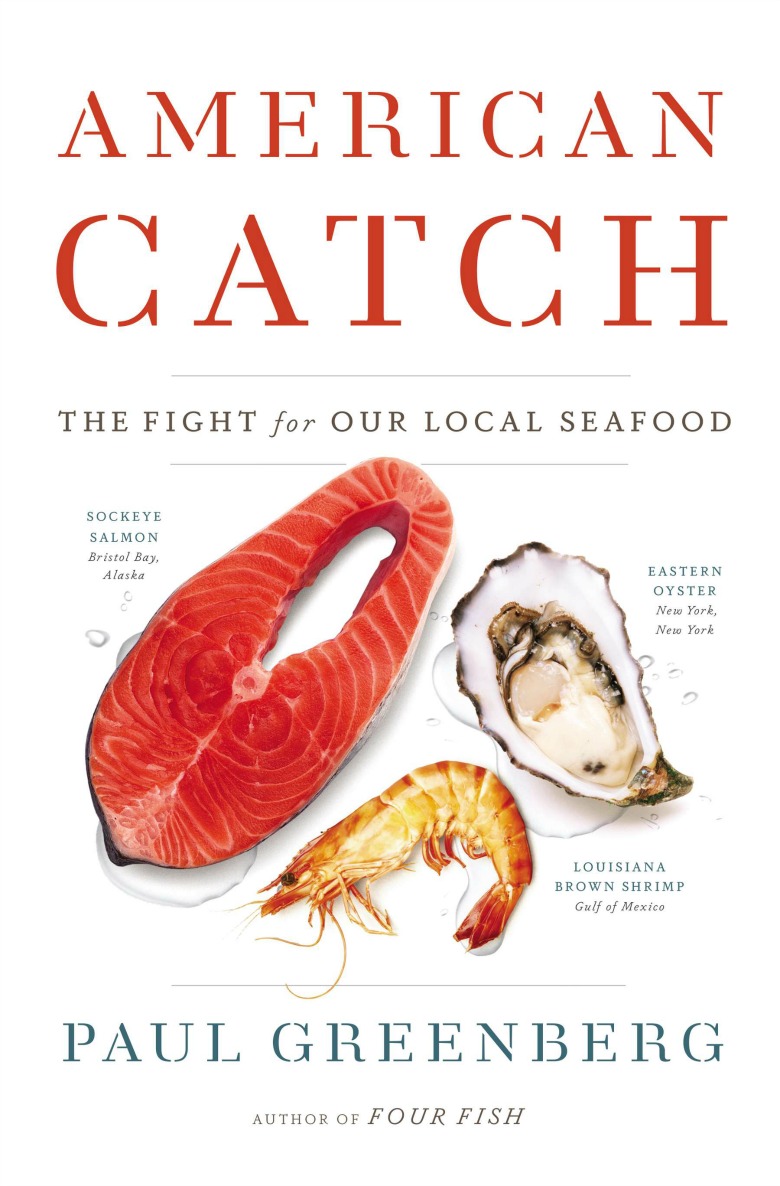 Two years ago I emailed author Paul Greenberg — whose excellent book Four Fish: The Future of the Last Wild Food was still swimming in my brain — with what I thought was a great idea for an article.

Fresh from a Miami dinner overlooking the ocean, where the all-imported menu offered Maine lobster and Alaskan salmon, I described my idea in a hastily typed email :“ppl love to order seafood when they’re vacationing near the ocean but SO much of the time, the fish came in the back door frozen in a box from very distant waters. piece would observe this lame phenomenon, and how ppl happily think they’re eating local fish but actually it’s often just the same global commodity fish you’d get back home, in columbus or kansas city or whatever. white tablecloths and plenty of paper plates too, all overlooking the coast. piece would also highlight some great places (or species) that are an exception, where ppl still sink their teeth into animals pulled from the waters the windows overlook.”

Paul’s reply: “The idea of local fish not being on the plates they should inhabit is actually the main thrust of my next book. So I’m on it”

That book, American Catch, landed this summer and in it, Greenberg lays painfully plain how our own seafood is on the brink of becoming “the one that got away.” Through in-depth examinations of New York oysters, gulf shrimp, and Alaskan salmon, he shows how the American plate was once piled high with spectacular local catches and how, in the past few decades, we’ve forsaken them — and our waterways — in favor of cheap alternatives shipped in from distant systems that are like watery factory farms. The book — a tirelessly researched, galvanizing read that travels from Manhattan’s waterways to the Gulf of Mexico, from destructive Vietnamese shrimp farms to Alaska’s magnificent Bristol Bay — reveals how the globalized seafood trade has become economically beneficial to a few and ecologically devastating to most. But despite bearing plenty of bad news, this book will also leave you hungry — for healthy policy, clean waterways and a paper plate heaped high with the local catch.

To whet your appetite, I’ll excerpt two of my favorite sections here, both about the baby steps in returning the once-mighty oyster to Manhattan’s own waterways, especially through the Billion Oyster Project (which will be profiled in next spring’s Edible Manhattan) and its hub, the New York Harbor School. Greenberg granted permission for this excerpt with the caveat that I include his warning: “I STRONGLY discourage people to eat NYC oysters. I don’t want to be the one to validate public health officials fears that the public might actually do this.” So put away your scuba gear, Manhattanites. Before we can eat filter feeders, we’ve gotta clean the water. 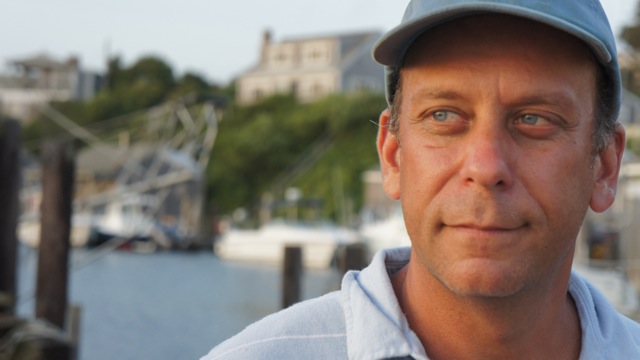 Excerpt from Paul Greenberg’s American Catch — The Fight for Our Local Seafood:

I, like others who have taken an interest in the New York oyster, wanted it all to go faster, to proceed more boldly. I wanted to see all the environmental bad deeds of the past somehow reversed by an ebullient resurrection of New York oyster reefs. But I saw very little of that as I trudged toward the nascent Soundview reef.

I stared down into the water and muttered to myself about the stasis that had occurred between bureaucracy and bivalve, wondering whether the whole thing wasn’t just some doomed high school experiment.

But as I trudged out toward the reef I noticed something flashing below on the surface of the mud. Taking shape below was a grayish form. It had nothing to do with the artificial reef and the reintroduced oysters farther down current.

No, the thing at my feet required no introduction — it was a native shell. I reached down and tucked my fingers underneath its telltale bumpy exterior, expecting to run them along a hollowed-out recess, long ago emptied by some marauding human force. But my fi ngers found no concavity. Instead I felt a bottom shell concealing a live and viable organism. I lifted it from the water and felt the satisfying weight that any digger of bivalves recognizes as money in the bank.

Yes, the thing in my hand was a real, live, naturally spawned New York City oyster.

Holding it up to the light, I appraised it now and looked at it for what it was. A brave sentry from a lost kingdom.

And it was beautiful. It was what people in the oyster trade would have called “a single.” With no native reef shell to cling to, it had formed a perfectly shaped shell that when scrubbed and cleaned would suggest the poesy of the sea without any of the gunk. It might have fetched upward of two bucks.

Jim Lodge spotted me standing in the Soundview waters staring at it.

To my surprise, he quickly produced a pocket knife and found the creature’s principal duct, located near its triangular tip. Sticking in the knife, he worked it sideways, gradually stretching out the adductor muscle until a little of the liquor slipped out, indicating a breach. He then slipped in the knife and cut the adductor on the oyster’s ventral fl at side. This, followed by a quick sweep of the knife over the interior of the dorsal shell, laid it bare in the summer sunshine.

I stared into the still beating heart of the oyster and felt something strange. A mixed-up muddy feeling as murky as the Bronx River at my feet. I felt admiration and desire for this animal — this creature that had survived so much against such long odds. I felt anger at the people who had removed its relatives with such disrespect and at the same time I felt intrigue at the meroir this survivor held within itself. I wanted to rage at the Dutch colonists, who, instead of returning all those wonderful shells back to the water, where they could have made a home for so many other oysters and perpetuated New York’s population, had instead burned them all down for lime, crushed them up into roadbed, discarded them, disregarded them. I felt disgust at the government bureaucrats who’d given up on the oyster, accused it, forcibly removed it, denied its right to exist — who had branded it with sterile legal terminology, called it a “nuisance,” and decided it had no right to be in these waters.

Taking the oyster up again, I looked at it and slowly drew it to my lips. Its shell had already been breached. It would die soon. But right now it was alive and held within it the true energy of New York City. The essence of this place where I lived.

All reason abandoned, down the hatch went the New York oyster.

It was delicious, if a bit warm.

Though we moved here and took up our lives here and made our livelihoods here, did we have to, by design, cut out the city’s seafood heart? Did we have to destroy twenty-one thousand of the twenty-five thousand acres of salt marsh our estuary once possessed? If you run the numbers, you find that this marsh would have been capable of producing all the seafood New York City could possibly need. The Hudson River estuary should be a place that nurtures and rears the fish and shellfish of the Northeast. This is true for the river mouths all over our country. San Francisco, Seattle, New Orleans, Boston, and Washington, D.C., are all cities built atop salt marshes and fishing grounds.

We have established dense populations in places of great biological wealth, decisions that have caused great damage to our marshland and the species that depend on the habitat. Is there not a way to share the intertidal, the place where oysters and humans meet?

As the idealistic New York oyster restorers suggest, maybe there is a different way of doing business with the waterfront. We’re at a moment of unique opportunity. All over the United States a lot of money is about to be spent as sea levels rise and storm surges become more prevalent. In New York alone some $50 billion may be invested in the waterfront post-Sandy. Of course many people are salivating over the possibility of getting their hands on some of that money. There is no shortage of desire to move back into the intertidal, to rebuild things as they were, claim damages, get a share of the Sandy pie.

But, moving forward, maybe something else could be done with that $50 billion other than a simple patch and fix. Around New York discussions now percolate of a “Blueway,” a girding of living biologically friendly infrastructure that would serve as a new kind of edge to the terminus of the city. And it is high time for such a development, not only for New York but for every place humans build their settlements on the coast. The ocean is coming at us in a way it never has before, and very soon we will be forced to profoundly renegotiate a truce between land and sea. For millions of years the typical way the Eastern Seaboard and the Atlantic drew up their treaty was by establishing a living, biologically dynamic border called a salt marsh, which was protective of the coast and productive of seafood. Underpinning it all was a miraculous biological filter called an oyster.

Yes, we are a long way off from once again letting the oyster dictate the terms of the truce between land and sea. But the people who understand the importance of this vision are now graduating from places like New York’s Harbor School.

The next time land and sea clash in a major way to hammer out terms, I would hope that these people are present at the negotiating table.