Joan Gussow will be in the audience at Edible Institute in May. We asked her where she thinks the food world is headed. 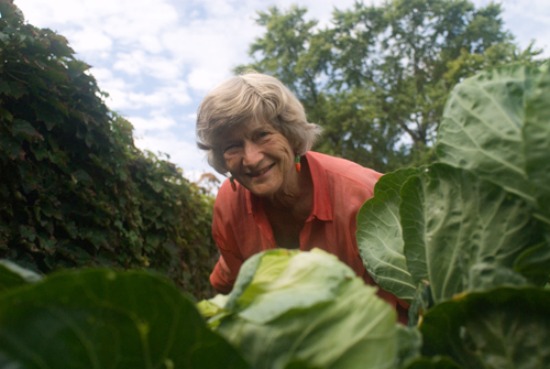 The countdown to Edible Institute continues with an interview with teacher, writer and matriarch of the food movement Joan Gussow. Joan gave the opening speech at the 2011 Edible Institute in Santa Barbara, and this year will be a member of the audience at our 2014 Institute here in Manhattan.

We asked her what she is looking forward to (“fruit trees — when they’re in bloom, I always think the world is wonderful”), what topics of conversation she finds powerful and where she thinks the food world is headed.

Edible Manhattan: Why are you joining us at Edible Institute?
Joan Gussow: I’m always interested in what goes on. I had been asked [to attend] before and I had given a speech. I discovered I really enjoyed it. The people were really interesting and the workshops were fun.

EM: Where is the “food world” headed?
JG: Let me put it this way. There seems to be a sort of East Coast–West Coast enthusiasm, but it is national — in Iowa and Kansas and everywhere you go, you’re finding restaurants who are interested in this. There are CSAs and farmers markets. […] On the other hand, I read in the paper a few days ago, in section D of the Times, “Scientists Sound Alarm on Climate.” This is in the Business section, by the way, so who’s paying attention? […] We’re living in this fantasy world where Congress won’t pass anything related to global warming because there are members that don’t believe in it. We have a railroad train coming straight at us with the headlight on and we’re saying everything is fine.

Is there a food movement? Yes. But where it goes in the short term and long term depends on climate.

EM: What topic or conversation stands out to you as powerful?
JG: The food supply is so dysfunctional at the moment. The supermarket is such a dysfunctional place right now. I just spoke at Michael Pollan’s class a few weeks ago, and we basically all agreed that we have to abandon the supermarket. Try to get your food from other places — CSAs, farmers markets, whatever. But not everyone is going to do that. Ninety-five percent of people aren’t going to do that. For that to change, we need to have a huge economic push against it. How else to dismantle the huge corporations that run the system?

The food movement is quite precious, I think. There does tend to be a focus on the kinds of things that only people who have plenty of food can pay attention to…. I’m also on the board of Just Food, which has convinced the government to accept food stamps at the farmers market. We’re empowering poor people to get involved in food systems. It’s clearer thinking than any organization I’ve ever been a part of…. I could probably live on food stamps if I had to, because so much of what I eat is mine. I am worried about the poor. I do believe that we need to help the poor buy food that is good and not just cheap.

When shopping, so many people say, “I go there because the food is cheap,” and yet they live in a giant house with a television with 49 channels at all times: all those things people don’t need and they do it because they can save money on food. Maybe that’s the first lesson: We need food, and we can’t eat if farmers can’t afford to produce it. Everything starts with something that grows. Barbara Kingsolver said it so beautifully: Anything that you do today started with something that came out of the dirt. We are so far from that. I just want to help people get closer.

EM: Tell us about a personal project you’re working on — outside of your published work.
JG: Right now I’m working on a small piece of writing because I hold a weekly writing group in my living room on Tuesdays and the woman who runs it gives us a prompt. This week the prompt is about a car trip, so I’m writing about driving back and forth through Iowa as a child, and I remember seeing a single casino in Las Vegas. It was Boulder Dam that brought all the people to Las Vegas. I was trying to figure out how long it took to get from California to Iowa, but then I thought about the road systems then…1931 was the first paved road in Las Vegas. According to Google, it now takes 22 hours, so I added some hours — anyway, it’s been fun.

But in the long run, I’ve been working on a book on hope, which I feel obligated to do after my last book, Growing, Older…. I think hopefulness right now is very, very difficult if you’re realistic.