An 80-year-old force of nature.

On a warm afternoon in Riverside Park, two young women pause during their jog to examine an unusual site near 138th Street and 12th Avenue. Swiss chard, basil and tomato plants spill out of more than 40 raised beds, surrounded by a collection of fruit trees and edible flowers, tended by a dozen volunteers. 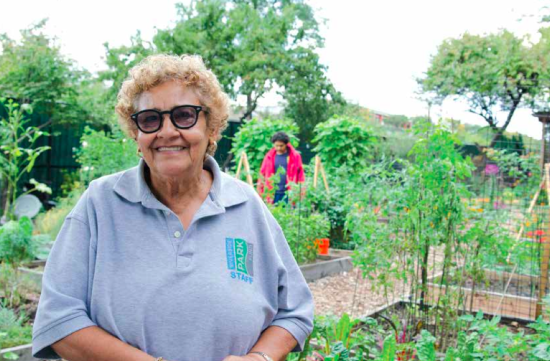 The young women seek out the garden’s leader, Jenny Benitez, whose thick-framed black glasses feature self-tinting lenses, a sure marker that she spends most of her days outside.

“No, we don’t sell anything here,” Jenny says. “We save the park, and anyone who works in the park gets a box. Just show up and we’ll give you gloves—that’s it!”

“I don’t have much experience,” admits the runner, with equal parts hope and hesitation.
“I’ll teach you,” smiles Jenny, before picking a big bunch of herbs for her visitors.
“I’m looking forward to seeing you,” she says. “I do all the park! It is my legacy.”

Jenny, who turned 80 in February, holds the official title of North Park Outreach Coordinator for the Riverside Park Conservancy, but a more accurate title would be chief mover-and-shaker behind the Riverside Valley Community Garden, an ever-expanding stretch that measures about an acre.

The park has always been a hub of neighborhood activity, but when Jenny and her husband, Victor, moved into their apartment on Riverside Drive 49 years ago, the activity taking place was mostly criminal, and starting a garden was the last thing on Jenny’s mind.

“People used to throw cars and tires down the sloping side of the park,” Jenny recalls. “One time a man from Brooklyn brought a whole truckload of garbage, and he was getting ready to dump it when I stopped him.”

Worse than the trash was the drug use. Addicts congregated in the park at all hours, setting up camp and discarding their needles not far from the tall weeds where Jenny’s four children played hide-and-go-seek. Jenny wanted to help clean up the park, but she was a busy mother and a pre-kindergarten teacher without time to spare—or a magic wand.

As the years passed, Jenny’s two oldest sons grew into teenagers. “They were just two years apart, so they did everything together,” she says. “Drugs were so bad in the neighborhood, and my older son developed a habit. Then his brother did, too.”

She would eventually lose them both—her oldest son died of AIDS and her second son of an overdose.

But over in the park seeds of hope were planted. A renegade gardener by the name of Steve Gallagher started using Riverside to grow vegetables. He flew under the city’s radar for a while, raising green beans and collards which he gave to soup kitchens, but eventually his corn crop caught the attention of park officials. As a compromise, they allowed him to establish the Riverside Valley Community Garden. Jenny took notice and found that nurturing life in the park helped her heal, too. 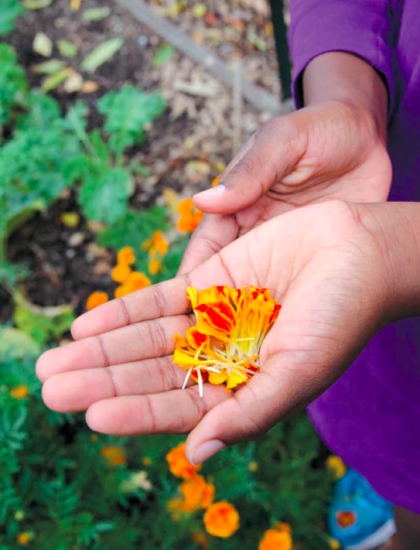 “When I was a little girl in Puerto Rico, we had gardens, but not food gardens,” she says. “I didn’t know I was going to be this passionate about gardening until I started working in this park. It was very therapeutic.” Steve gave her a plot to call her own, and soon she was down in the garden every day, her passion growing as fast as her cucumbers.

In the early years of the garden, the park was underfunded. To water her plants, Jenny had to carry buckets of water across the street in a shopping cart or run a long hose out her window to fill a barrel on the street below. When Steve moved to Quebec, he left the garden and its infrastructure deficits in Jenny’s very capable hands. Over time, she earned that mover-and-shaker title.

She remained a superstar volunteer until she retired from teaching in 1995—when the Riverside Park Conservancy gave her a part-time job. With the support of organizations such as the Conservancy and GreenThumb, she won a host of improvements over the years: running water, electricity, a storage area and tools of all sizes. She isn’t shy about laying claim to her accomplishments.

“I made 138th a one-way street,” she says, of her work with the Department of Transportation. “It used to be two ways. I did that.”

“Jenny is tenacious in such a gracious way,” says Susan Fields, former Manhattan outreach coordinator for GreenThumb. “I worked with more than 100 gardens and they were all wanting and needing something during the growing season. I would have all these voice mails, and half of them were irate. But Jenny’s messages were the ones you always wanted to call back. She cultivates the people she wants support from with her story and her charm.”

Jenny’s charm and the pride she takes in the park’s transformation are on full display when she
gives a tour of the space. Because her goal has always been to rehabilitate the whole park (or at least the swath of land she can see from her window), large sections of the garden don’t look like a garden yet.

“We always start by clearing the trash, putting in more soil, putting in a ground cover,” she says. “Then when the soil has been cleared and amended, you can start putting in shrubs and other plants.” As she bumps along the park pathways in her John Deere Gator (one of her favorite donations from the Conservancy), she points hurriedly to every twig and leaf, pausing here and there to ask her “number one secretary,” a young volunteer named Shiben Banerji, for a quick translation.

“These are beans, this is Swiss chard. Over here I have leeks. Those are—¿cómo se dice rábanos blancos?—white radishes!”

Shiben is one of 12 core volunteers who have dedicated themselves to the garden and, in return, have their own plot. But for him, this is much more than a place to grow tomatoes.

“I already lived in New York City about years by the time I found Jenny and her garden,” he says. “It was really only after becoming a part of the volunteer activities here that I became attached to a community and had some sense of belonging. I guess that’s what has me here so much—it is just like extended family.”

When Shiben got married last year, Jenny and her daughter traveled all the way to India to attend his wedding. 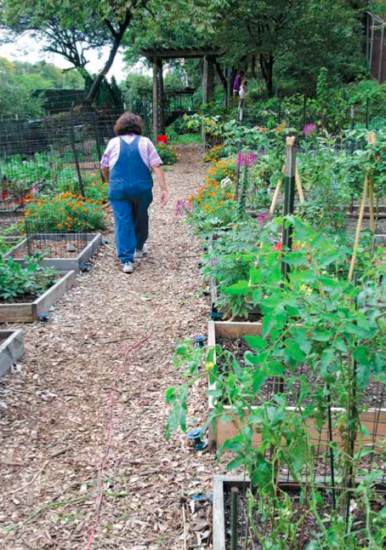 Jenny seems to have a sense for what people need, be it an extended family or a sack full of
okra. A couple years ago, Jenny stopped a young woman named Laurie Kindred who was passing the garden on her way to the grocery store.

“She wasn’t a volunteer yet, but I knew she came to the garden with her twin daughters,” Jenny says. “I called out, ‘I haven’t seen you in a while!’ and Laurie pulled off her scarf and showed me her bald head. She had been battling cancer!”

Jenny offered Laurie a garden plot so her daughters could dig in the dirt and fulfill their newfound fascination with worms.

Jenny has always used produce from the communal plots to feed the neighborhood, handing out sacks of kale or onions to anyone in need and cooking up big batches of eggplant Parmesan and stuffed green peppers for park volunteers every weekend. Last year she scaled back on the cooking and donated vegetables to two local soup kitchens instead.

“I was so excited when I took the donation,” Jenny says. “I took greens, kale and Swiss chard and cucumbers—about 50 cucumbers—and potatoes and onions…even garlic!”

John Herrold, president of the Riverside Park Conservancy, a nonprofit that raises funds and
organizes volunteers to support the park, says the vegetable garden offers something unique for park visitors, even if they never taste Jenny’s eggplant Parmesan.

“Not everyone appreciates the nuances of landscaped planting, but they can understand lettuce and cucumbers, so they become a draw for the community,” he says. “‘Oh, I get it—this is life, we are growing this stuff!’ It is a great way for people to appreciate the park.”

The runners leave, loaded with basil, and Jenny greets Laurie and her twins, stopping to look at vacation photos on Laurie’s cell phone while Victor prepares a pile of “frankfurters” left over from a volunteer event the day before. Now that he is retired from both the postal service and driving the number 5 bus, Victor spends much of his time in the garden with Jenny.

It’s clear the same could be said of Jenny, her garden and the community that grew up around it.