“I don’t like to do business over food, because I like to enjoy my food while eating.” 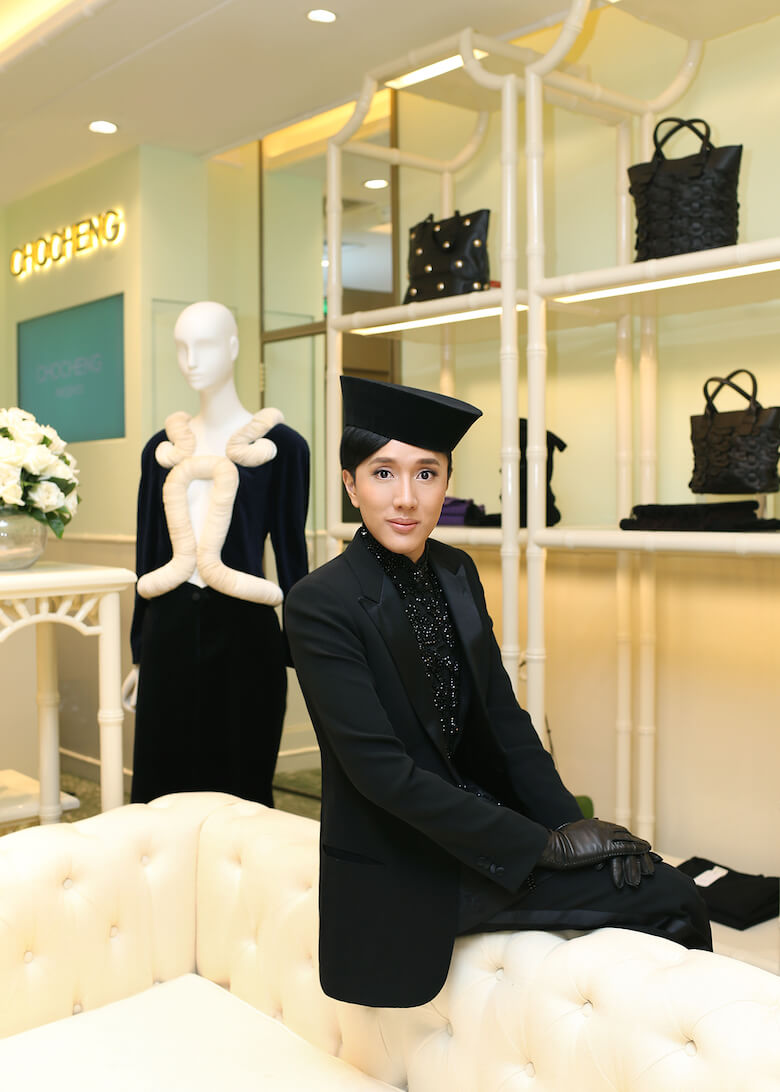 The designer at his shop in Beijing. Photo courtesy Cho Cheng.

It’s the afternoon before Cho Cheng’s runway show at New York Fashion Week, and he’s agreed to talk to me about food. The stress of putting together these complex runway shows affects everyone—the designers themselves most—yet Cho is calm in answering questions, displaying the same grace he creates in his designs. He describes his current collection as being “inspired by the film Witness for the Prosecution from 1957 with Marlene Dietrich. There will be a little bit of Dior and a little bit of Hitchcock. Very glamorous and ladylike, but seductive.”

Cho came to New York from London to study fashion at Parsons. Born in Hong Kong, he grew up in the world of fashion and haute couture. His grandmother, Betty Charnius, had an enviable career as a costume designer, fashion designer and entrepreneur in places as varied as Shanghai and Hollywood. Her influence lives in Cho’s work, in the fine couture details he uses on each piece.

On food, Cho says, “My family is very involved with restaurants and hotels in China, so I grew up with very high standards of what food should be. In China, everybody is a foodie. A classic idiom says that food should look good, smell good and taste good. It has to be natural, too. I only use natural material for my clothing, because it’s comfortable and it breathes better—and it’s good for your skin. And for food, I think that’s even more important.”

Here, some of Cho’s essential restaurants:

Bemelmans Bar at The Carlyle
“The bar at The Carlyle, because it’s my neighborhood and I’m lazy and it has a good selection of cheese and a good Cobb Salad I like, so that’s where I go with friends.”

The 21 Club
“I don’t usually do business lunch. I don’t like to do business over food, because I like to enjoy my food while eating. If I had to, I’d go to the 21 Club. They have a wine cellar, I’ve been there for parties, my friends do business there, it’s cozy, it has a history, and that’s good because when you do a business lunch or dinner with strangers, it’s an icebreaker.”

But he admits…
“During Fashion Week, I mostly eat at Starbucks. Nobody working at Fashion Week has any time. If they can sit down and enjoy a lunch or dinner, I can’t believe they’re really at Fashion Week.”