The milk is attracting a steadily growing following across the city and the new dairy, which is using the first pasteurizer of its kind in New York, is worth tracking down. 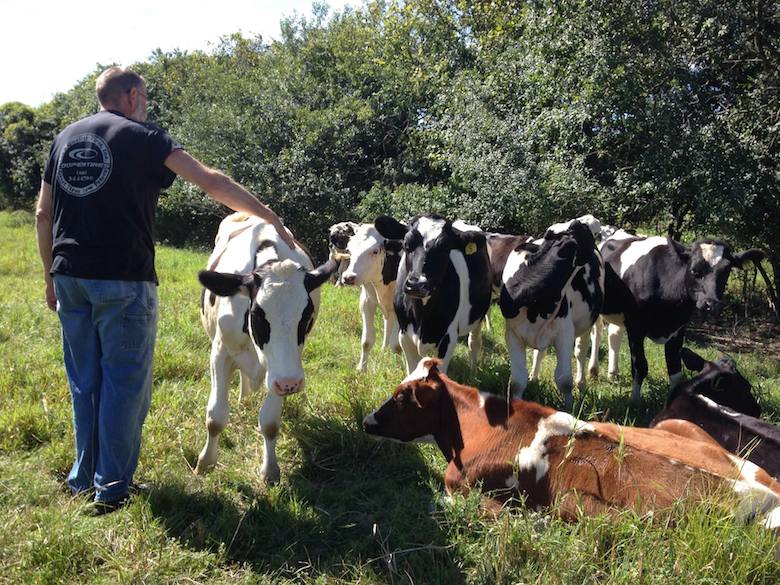 You still can’t buy raw milk without jumping through some major hoops, but Rose Hubbert claims that her milk has been compared to unpasteurized product by people who know their stuff. My own experience of raw milk is limited to a brief (and wonderfully subversive-feeling) tasting on a North Carolina farm where it was labelled “Milk for Pets,” and the main takeaway was that it smelled like grass clippings and left me with the most perfect milk mustache I’ve ever had.

But I can confirm that Rose’s milk, which comes from Old Mother Hubbert Dairy and Back to the Future Farm and is sold at Greenmarkets throughout the city, is sweet, smooth and creamy. Once, when I was working at the information tent at the Union Square Greenmarket, a nine-year-old boy came up to me and described their packaging in great detail with an “oh-my-God-I’m-about-to-get-my-chocolate-milk-fix”  gleam in his eye. It broke my heart to tell him they weren’t in market that day, and he refused to visit any of the other dairies. The milk is attracting a steadily growing following across the city and the new dairy, which is using the first pasteurizer of its kind in the country, is worth tracking down. 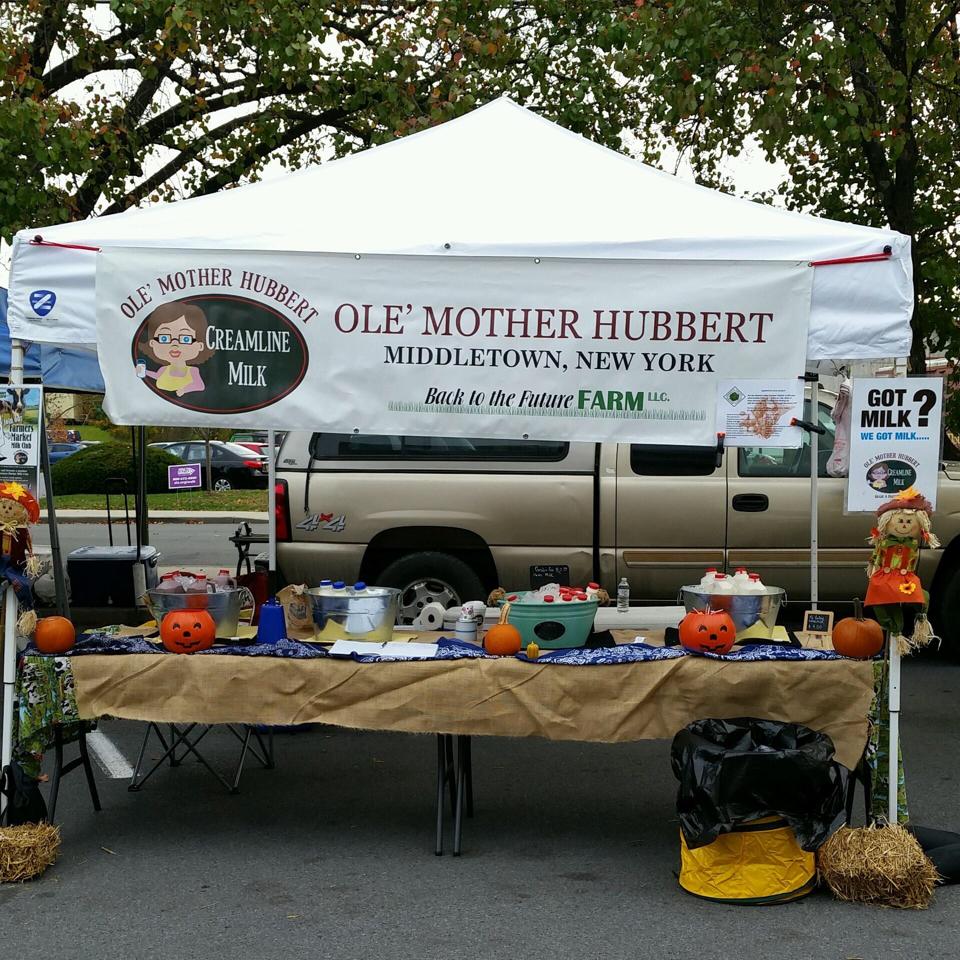 Credit: Facebook/Back to the Future Farm

Old Mother Hubbert Dairy started coming to markets in August and their offerings are refreshingly minimalist. They bring whole milk, chocolate milk, eggs and whole chickens. Sometimes they bring half chickens as well, but for the most part they stick to the basics. Rose Hubbert, her husband Lee, and their ten-year-old son Joshua comprise Old Mother Hubbert, a dairy that partners with Back to the Future Farm to bring Orange County milk to the city.

It all started about two years ago when the father of dairy farmer Mike O’Dell happened into Rose and Lee’s tire shop. They began talking about 18-year-old Mike and his interest in dairy farming. The O’Dell family had sold their cattle when Mike was nine years old, and after that he worked at local dairy farms after school and on weekends. “He just loves the animals,” Rose said, tearing up at the memory over burgers and onion rings earlier this week. Mike graduated from high school and spent one semester in college before realizing that his heart was in dairy farming. He moved back home and asked his parents if they could bring cows back to their farm. The family took out a loan and bought a few head of Holstein cattle, and Mike has been on the farm ever since.

Rose and Lee were touched by Mike’s story, and the relentlessy entrepreneurial couple decided to get their toes wet in the world of dairy farming. They wanted to set up a business that would earn enough to ensure Mike would never again have to sell his cattle or leave the farm. That year, they raised two of Mike’s bull calves and started to talk with New York State Department of Agriculture and Markets about how to turn a profit in dairy. They were told that pasteurized liquid milk (as opposed to yogurt, ice cream or cheese) would do well in New York City markets. They began to research and taste various pasteurization methods, sampling milk from a variety of dairies and searching for a machine that could accommodate both their small scale and their interest in preserving as much taste and texture as possible.

Pasteurizers can be narrowed into two categories: batch pasteurizers and HTST pasteurizers. Batch pasteurizers heat high volumes of milk for longer periods of time than “high temperature short time” (HTST) systems. Small-scale dairies usually use batch pasteurizers as the capital costs for this method are much lower. However, HTST systems are more precise than batch pasteurizers because the milk is fed through a series of tubes or metal plates rather than being heated in a large vessel. This means that the milk spends less time at the high temperature necessary for pasteurization, resulting in decreased protein denaturation and a final product that is closer to raw milk (for a more technical comparison of the two systems, Cheese Reporter can explain the difference).

Rose and Lee narrowed their search to focus on HTST systems. Although most HTST systems are designed for large-scale production, they were determined to find something that would work on their small farm. They finally found one manufactured by Bob-White Systems in Vermont. Rose beamed as she showed me a YouTube demonstration of “LiLi” (low-input low-impact) and waxed poetic about “her.” The machine, which fits into a shed they built in their tire shop, combines the precision of the systems preferred by large-scale dairies with the small-scale electricity and milk inputs of a micro-dairy. It also uses about half the energy as a batch system of the same size.

The hurdles didn’t cease when they found the perfect pasteurizer, though. For one thing, LiLi had not yet been approved for use in the state of New York. They didn’t know when she would be available and they wanted to open for business as soon as possible. As Rose tells it, she was literally handing in the paperwork for an inferior pasteurizer when a colleague burst into the the office to tell her LiLi had been given the green light. That very weekend, she and Lee drove to Vermont to buy their new machine. 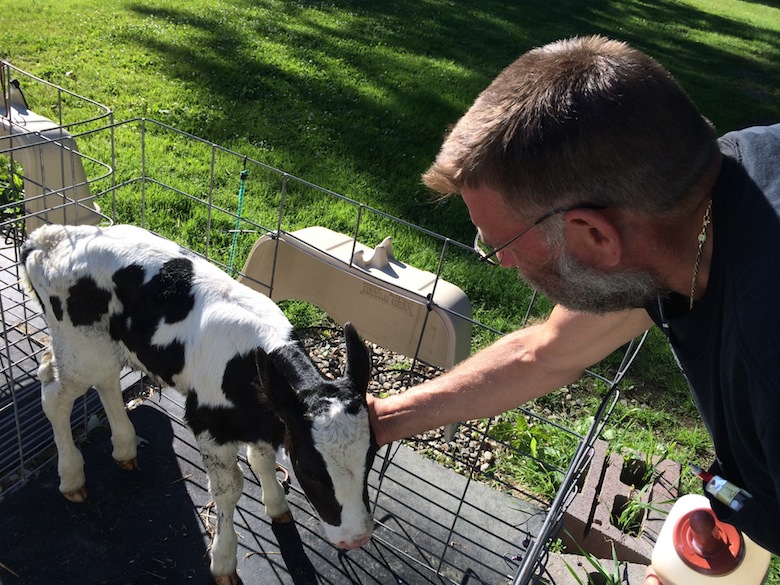 Between Back to the Future and Old Mother Hubbert, the Hubberts and Mike O’Dell own about a hundred head of cattle. They raise Jerseys and Holsteins and commingle the milk. Many of the calves graze in the 35 acres behind the Hubberts’ tire shop, and they just leased a barn with 67 more acres for the winter. When asked about plans for expansion, Rose was enthusiastic about finding another young dairy farmer like Mike and sourcing from both herds. Their plans for expansion are by no means limitless; they hope never to work with a distributor. Rose and Lee see Old Mother Hubbert as more than just a dairy; they want to prove to their community that farming can be profitable and ensure that people like Mike will never have to leave their land.

Rose and Lee’s involvement with youth in agriculture extends into their family life. Her face lights up when she talks about her ten-year-old son, Joshua. “Let me tell you, he’s a worker. He’s ten going on twenty-five.” She pauses to tell him how to make instant oatmeal over the phone. “He’s so independent. And it’s farming that does that.” Josh is involved with all aspects of milk production and is even a familiar face at market on weekends and teacher workdays.

The Hubberts pasteurize their milk every night before market, and Rose promises that “worst case scenario, people on Monday will be buying milk that was processed Saturday night.”