While the topics ranged from seed saving, soil science and starting a food business to school food, greening urban infrastructure, food education, advocacy and policy, the underlying themes were community and equity. 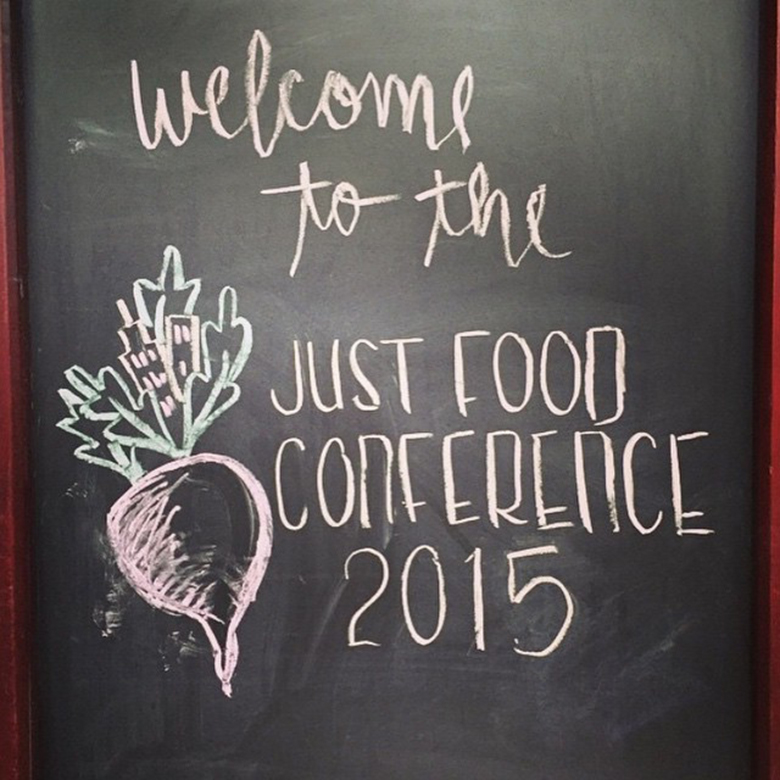 The sold-out event  was held in conjunction with Columbia’s Laurie M. Tisch Center for Food, Education & Policy, and brought together over 700 community organizers and policy makers, urban gardeners and farmers, food advocates, educators, students and entrepreneurs for close to 40 lively workshops, panels, lectures and discussions. While the topics ranged from seed saving, soil science and starting a food business to school food, greening urban infrastructure, food education, advocacy and policy, the underlying themes were community and equity.

I followed a riveting track focused on community land projects like urban gardens after much deliberation over the excellent program choices. Community garden advocates presented the early session, Urban Land Tenure in NYC, which delved into urban gardens’ lack of security. As presenter Karen Washington put it, land security “is only as good as the present administration.” The audience visibly shuddered when reminded of the Giuliani administration’s disregard for green spaces, recovering somewhat at the reminder of Bette Midler’s heroic garden saves via the New York Restoration Project. The question of what, and who, defines “the commons,” or communal natural and cultural resources, was brought up repeatedly.

An intense discussion arose about unforeseen consequences of Mayor de Blasio’s affordable-housing campaign promise, where 17 active gardens lots — including some in lower-income areas like Brownsville, a food desert that suffers disproportionately from diet-related poor health — are to be put on the auction block for developments with designated affordable units. It was inarguably a difficult judgment call, until deeper delving revealed that “affordable” is based on a regional median income of $78,000 and translates to $3,200 a month for a family-of-four-size unit, effectively placing the units squarely out of reach of Brownsville residents whose actual median income is $15,000. Rough enough to have to lose green space in a throwdown between gardens and housing, but when the housing then prices out the community, it’s time to get organized. As Washington emphasized, “We need to get out there ahead of the bulldozers.”

Steve Rosenberg, executive director of the Scenic Hudson Land Trust, chimed in from the audience with suggestions of “community land trusts” as a way to preserve landscapes from the perils of development, which, he helpfully informed us, is just what he’d be presenting during the lunchtime Campaign Action Sessions.

And that’s exactly how the entire Just Food Conference works: Whether facing challenges of food justice or getting your start-up started, some experienced citizen, educator or entrepreneur comes along with possible courses of action and accompanying success stories demonstrating that, with know-how and perseverance, encourage that it can be done.

An afternoon session on Equity in City Government featured a panel of directors from city departments and programs including GreenThumb, Health and Mental Hygiene, the Parks Department and the Mayor’s Office of Food Policy. Each presented convincingly on the importance of equity for the city’s well-being and assured audience members that the call for developing garden lots was still under discussion. In response to some skepticism, Barbara Turk, the mayor’s lauded director of food policy, personally invited participants to meet with her for “meaningful community engagement” and consensus building prior to the April 22 (Earth Day) release of the city’s plans via PlaNYC for sustainable and resilient infrastructure.

The overarching message of the day was that equity requires action, whether through advocacy, saving seeds or even canning produce. Keynote speaker Eric Holt-Giménez of Food First, a food justice think tank and activism incubator started in the ’70s by Frances Moore Lappé, hit that point home with his closing remarks to conference participants now reconvened in the auditorium. Bringing the “think globally” to the rest of the conference’s “act locally,” he bestowed hard truths with hard data about how the world’s food system really works, how we got to this point and what it takes to make a difference. He urged that there’s strength in unity and community, vulnerability in complacency and that in the context of industrial agriculture, growing your own food is a subversive act. He spoke of heroic deeds by ordinary citizens organizing to make sure kids got breakfast and about peasant revolutionaries who refused to give up hope. “Where is the one place where people are actually rebuilding the public sphere from the ground up?” he asked. “It’s the food movement, it’s food sovereignty, it’s you.” Having thoroughly fired up the participants for civic engagement, he stepped away from the podium to a standing ovation while leaving us not so much starry eyed, but believing that change is possible.