Sunday evening, I cozied up in the Upper East Side’s the East Pole for Paris Popup, a five-course tasting and wine pairing hosted by the Sporting Project. 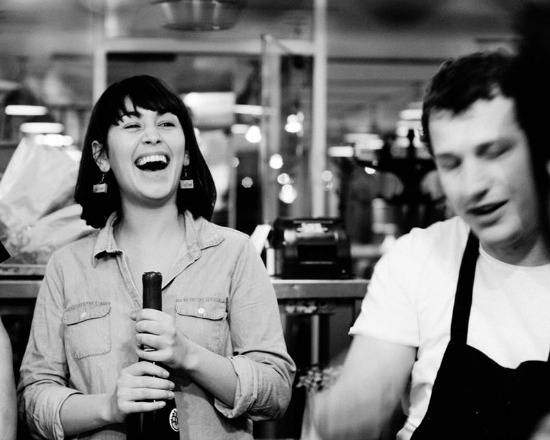 To conclude the horribly snowy weekend, I cozied up in the Upper East Side’s The East Pole for Paris Popup, a five course tasting and wine pairing hosted by The Sporting Project. Through their international pop-up series, Harry Cummins and Laura Vidal are traveling the world sharing their love of food and wine.

Harry and Laura conceived of Paris Popup while they worked together at Frenchie in Paris, where he was the head chef and she was the sommelier. For their Manhattan rendition of Paris Popup, they collaborated with Nicholas Wilber, chef at The East Pole, to create an indulgent Parisian bistro-style menu.

Sunday’s menu featured wines from five countries, but the food was almost entirely locally sourced. Though chefs Harry and Nicholas kept the menu descriptions short, the food was complex, with each dish proving that our winter agriculture has the potential to make something incredible.

First Course – Carrots, Citrus, Yoghurt
The meal started with a tasting of Kyoto carrots from Norwich Meadows Farm in upstate NY, served with four varieties of orange segments and cumin sheepsmilk yogurt (well, yoghurt according to British-born chef Cummings) from Old Chatham. When this course arrived, The East Pole owner Anthony Martignetti, who eats most nights at the restaurant, commented that his winter diet contains more root vegetables than he can handle. Personally, I wouldn’t mind half a year of carrots if they were juice braised, tender and sweet.

Second Course –Raviolo al Sole, Hen of the Woods
The raviolo was homemade with eggs from Garden of Spices in Greenwich, NY, and served aside hen of the woods mushrooms from John Madura Farms in Pine Island. It sat atop a puree of mushrooms and Salvatore Bklyn ricotta, which is made daily with milk from upstate and is Martha Stewart’s “favorite ricotta in the whole world.”

Third course – Monkfish, Black Garlic, Black Sesame
Black monkfish — caught in Montauk — was pan fried and served over  a jet-black sauce made from black sesame, black garlic and squid ink. It was accompanied by a single Long Island mussel that was rolled in black sesame seeds and shiso cress.

Fourth Course – Piedmontese Shortrib, Parsnip, Prune
“This short rib cuts like butter.” I told my neighbor, Rita Jammet, who owns La Caravelle champagne. “You know what that means — it has a lot of F-A-T,” she replied. We were all about it. The beef came from Fossil Farms in Boonton, NJ and was braised in mirepoix, red wine and prunes and served over parsnips from Paffenroth Gardens, a small farm in Warwick.

Want to catch Paris Popup at one of their future locations? Check out their upcoming event schedule.