Eating With Clio: How to Live Without Eggs, Dairy, Seafood, Nuts, Wheat and Soy 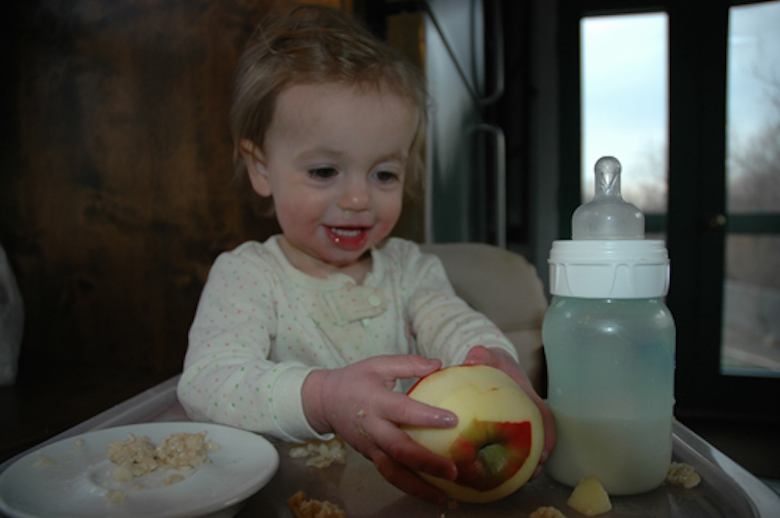 It wasn’t just about the rash. My daughter Clio was also small–she was in the bottom 5 percent of the height/weight curve until recently, although her egghead circumference typically hit the top 95 percent. Some doctors connected her small size to the rash: It might be a sign of digestive problems, or even if she were eating well, her little body’s need to cope with the rash might be sapping her of precious calories.

The rash mysteriously came and went. On a winter trip to Florida, it disappeared entirely for a couple of weeks, something we pinned to the relatively warm, humid air, or all the grapefruit Mom was gobbling, or something else about the Sunshine State.

Although no doctors recommended consulting an allergist–and we never thought of it ourselves–an allergy to something Sarah, her mother, was eating seemed likely. And so we began the complicated process of eliminating the most common allergens from Mom’s diet, and by extension Clio’s breastmilk.

The six most common food allergens for both children and adults are eggs, dairy, seafood, nuts, wheat and soy.  Just as a mother with a irritable, gassy baby might lay off the cabbage, Mom would cut one of these six allergens out of her diet for two weeks and assess the impact on Clio’s rash. Needless to say, the results were difficult to decipher… Not to mention the fact that the exigencies of modern-day parenting might mean feeding Clio some frozen breastmilk from before our allergen-eliminating experiment even began. Or if Sarah couldn’t resist the allure of a young Pecorino from Cavaniola’s Gourmet when she was supposed to be laying off the dairy, or wanted to whip up some eggy-cabbage, or was offered some oily Spanish mackerel from Blue Moon Fishery.

Yes, it was easy enough for Sarah to stay allergen-free by eating the Buddha Bowl at Provisions (hold the tofu) or sipping juices from LifeThyme while she was studying integrated medicine at the Urban Zen Foundation on Greenwich Street. But breastfeeding moms can be ravenous, and the thought of denying the growing child one of these nutritious and delicious food groups seemed like adding insult to injury. We didn’t have our own yardbirds, but did have friends who were part of the poultry-keeping craze, and in the winter, in a drafty house in Sag Harbor, tossing out the easily, warming meals of fried eggs or grilled cheese or seafood chowder was a sacrifice that is a small sign of the love a mother has for her child.

To complicate things even more, because we were simultaneously interested in putting some more meat on little Clio’s bones, we introduced foods early, at around 3 months, spoonfeeding her mashed egg yolk and olive oil, bread-and-butter balls and Indian yogurt lassis, all of which she happily gummed down–allergens or no allergens.

Slowly but surely, a pattern did develop. And at about 6 months, just as we began to conclude that Clio’s rash was tied to dairy or eggs or both, we learned from a friend who had recently been diagnosed with a rare allergy to red meat that there was an allergist just a few towns over. Low and behold, skin prick tests for a battery of allergens showed that Clio was strongly allergic to dairy and eggs. Mom cut both dairy and eggs out of her diet started with dinner that night, and Clio’s rash was gone by the morning.

We were told there was a good chance she would outgrow the allergy by 2, and if not by 2, then perhaps later in life. But Clio was still small, and we were still paranoid about it, despite the fact that Clio was up and walking before her first birthday, babbling incessantly, gobbling food and showing every other sign of healthy development. So, we obsessed over her eating. And if she couldn’t have the butterballs, omelettes, lassis, and other fatty foods we had been feeding her, we were determined to find other fatty foods to fatten her with.

Tune in next week for lessons on feeding kids fatty foods, including the little known recipe for pork stock in a bottle.