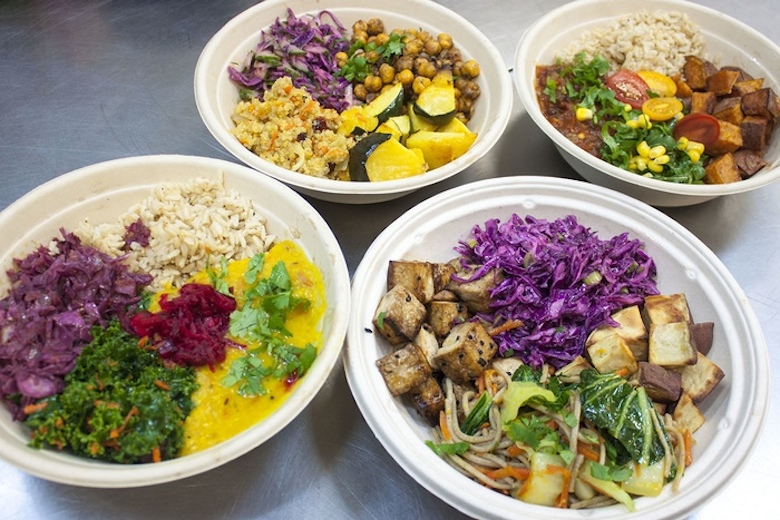 Even though a new riff on the “build your own salad and we’ll dress it for you” lunch spot seems to open every day in Midtown (is anyone else overwhelmed by all those choices?), it’s still kind of hard to find fast vegetarian that doesn’t come with a heightened sense of spinach-tooth anxiety. Two Tablespoons, an all-vegetarian startup that caters to the lunch crowd, hopes to win over bored salad eaters with dishes like radish, apple and white bean ceviche and sesame baked tofu with roasted Japanese yams, soba noodles and seasonal vegetables. The company, named for the surprising ubiquity of two tablespoons in the recipes they researched, has already had success at Madison Square Eats and Broadway Bites. Now they’re hoping to open a permanent stall in an as-yet-unannounced location “very close to Grand Central,” and they need your help to cover some of their costs.

Co-founders Katya and Gosha were both working dissatisfying jobs when a visit to Smorgasburg provided a flash of inspiration. “A couple of years ago when we started this, we had no idea how quickly we would become successful… we never really saw ourselves as entrepreneurs, but [our food] seemed to become relevant,” Gosha told me on the phone this week. They set about developing recipes and finding cheese made with vegetable rennet, and soon dishes like summer rolls with smoked tofu and quinoa were born.

They’ve decided to use Kickstarter to raise funds so they can maintain control over the growth process. They’re committed to spending extra on biodegradable packaging and eventually sourcing most of their produce from local farms. Although Gosha isn’t a strict vegetarian, he believes that a low-meat diet makes for an impactful change in lifestyle. “One person’s food choices affect the environment a lot more than choosing between a regular car and a Prius.”

Learn more on their Kickstarter page — any donation helps make their stall a reality (and the rewards aren’t bad either).