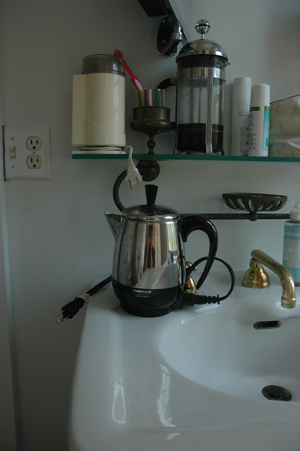 Our coffee-making set up, when we had no kitchen. If you’ve got no electricity, you can still cold-brew, so long as your beans are already ground.

SAG HARBOR–Earlier today, in a dash of Hurricane-driven provisioning that has struck the region from Manhattan to Montauk, my wife, who is always thinking ahead in a way that makes me love her, went to town for batteries, candles, bread and other essentials, including two pounds of already-ground coffee from our local roaster, Java Nation. We usually buy whole beans, but if electricity goes out, we won’t be able to use our grinder, of course.

Tonight, as a dry run, we’ll add the grounds to our Bodum French press, stir in some tap water and let it sit until morning–the first of what may be many pots of cold-brew coffee if we lose electricity (or more) when Hurricane Irene passes over this finger of land that extends out into the Atlantic Ocean. (Watch the storm move at this New York Times tracker.)

Town is kind of an aggressive mess right now. The grocer is running low on milk and bread, the hardware stores have no batteries (they’ve still got some at the 5 & 10), the lines of cars snaking out of our local gas station are more 1973-oil-crisis than 2011-harbor-town, and people seem legitimately scared. For our part, we will fill our bathtub with water, and ready a few boxes of food, water and other emergency gear and load them into the car if we decide we need to head to higher ground. (Our low-lying part of Sag Harbor floods during periods of excessive rain, although apparently it didn’t flood during the monster storm of 1938 known as the Long Island Express, whose lesson-for-today the East Hampton Star just reported.)

Despite all this nervousness, the preparations–and prospects of cold-brew coffee–remind me of a blissful (simpler) time a few months ago when we were also living without running water or electricity in our kitchen. With our downstairs under construction, we turned a part of the hallway at the top of our stairs into our pantry and dining room, stocking a bookshelf with such shelf-stable essentials as peanut butter, honey, coffee, tea, bananas and crackers. (I was surprised to not see coffee in this list of hurricane-ready foods that just went up on seriouseats.com.)

Living without a kitchen can, at moments, be fun. We ate mostly on Verterra compostable plates (no dishes!) and used paper napkins, rinsed out our coffee cups in the bathtub, ate meals on a picnic blanket outside our bedroom, and made our morning coffee and honey water using a hotpot, French press and stainless steel teapot I once borrowed from a Chinese restaurant. The meals were simple–homemade sandwiches, egg-broccoli-pasta salads cobbled in a friend’s kitchen, fruit and yogurt–and the highly constrained dining space actually made for easy coraling of peripatetic eaters like Clio. (I’m convinced her eating habits greatly improved during this period of simple meals, with us all sitting crosslegged on the floor.)

Eating without a kitchen or electricity. At left, Cyrus enjoys one of our hallways breakfasts of bread and cheese. We made our meals mostly from what we could keep on a bookshelf, at right.

But, if this hurricane delivers a direct hit to the East End, then having to make coffee without electricity will be the least of our troubles. We are making other preparations. This morning, we took our oyster cages out of the water–lest the storm tears them from where they are docked–and stowed them in the shade of a massive privet hedge well-back of the storm surge. (Oysters can keep a few days out of water, as long as they aren’t in direct sun.) We harvested most of what was ripe in the garden, including edamame, tomatoes, cukes and berries.

And even though they could keep in the ground, we dug the last of our potatoes, in case our garden is under water in a couple of days.