New York African Restaurant Week will present awards for for “Chef of the Year,” “Restaurant of the Year” and “Community Leader of the Year.” 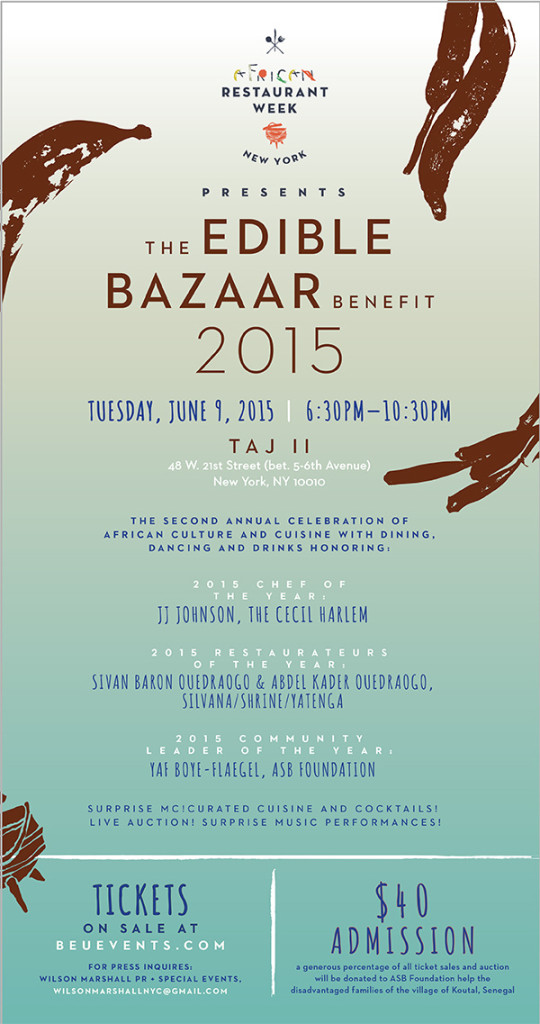 New York African Restaurant Week is in full swing, and some of our favorite restaurants like Bati, Madiba, and The Cecil are participating. But the festivities reach a peak on Tuesday, June 9 at 6:30 p.m. at Taj Lounge for the Edible Bazaar Benefit, where awards will be presented for “Chef of the Year,” “Restaurant of the Year” and “Community Leader of the Year” (Tickets to the benefit, available here, are $40). We caught up with a few of the recipients as well as Akin Akinsanya, founder of NY African Restaurant Week, to talk about the state of African food in the diaspora.

“Africa’s food staples (rice, beans, yams, potatoes, spices, various fruits) help to make some of the best tasting meals across the globe,” Akinsanya says. He adds that the week is meant to celebrate and promote the wonderful restaurants that are bringing “the richness of [African] cuisine and culture” to New York. For this reason, he and his team are awarding recognition to chef JJ Johnson of The Cecil and restaurateurs Sivan baron Ouedraogo and Abdel Kader Ouedraogo.

The Cecil in Harlem received a James Beard nomination this year and has been turning heads all over the city. But don’t refer to their Asian-influenced menu as fusion — Johnson is quick to emphasize their historically-grounded approach. “This is a cuisine that exists today in West Africa with the influence of the Chinese Vietnamese populations and their cooking techniques. We are finding that people really enjoy these flavors.” He recommends the sweet and smokey duck, the ginger squid and the udon noodles with West African peanut sauce, braised goat and edamame. For newcomers to the restaurant, he promises the oxtail dumplings will not disappoint.

Proceeds from the benefit will go to the ASB Foundation, spearheaded by Yaf Boye-Flaebel. She’s the 2015 Community Leader of the Year, and her organization provides support to disadvantaged families in Koutal, Senegal. Created in 1968, the village houses people with leprosy and their families. “Knowing about the situation makes it my duty to do my best in asking for help,” she says. Proceeds from the benefit will help build a fence around Koutal’s school, and they’re hoping to fund computer purchases later in the summer. “The times where your origin determines your level of education are gone, and we hope we can provide online education to anybody who is willing to work on a better education.” Sound like a worthy endeavor? We think so, too — and we’ll see you next Tuesday.