A Very Brief Tour of the Met Through Food

To celebrate the recent 140th birthday of New York’s most magnificent museum, we selected some of our favorite food-related pieces in the Met’s collection. 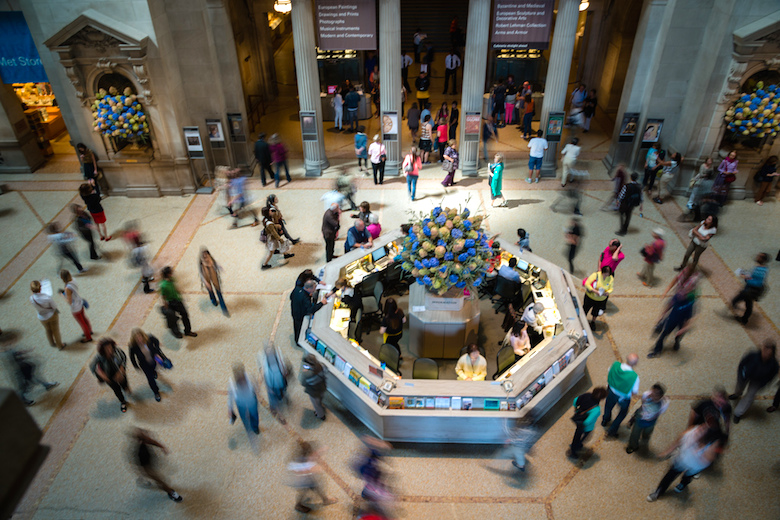 My art history class had already suffered through months of snoozy cathedral floorplan memorization when an especially brutal Minnesota winter hit our college campus. I called home to ask my mother to send an extra down jacket. One gray day followed another. The rest of the semester looked grim.

And then, when the wind chill still crippled student extremities, the French Impressionist slides began to swish onto the wall of the darkened auditorium. Bright, broad skies were projected at many times their actual size. We could see each loose brushstroke, could practically hear the crinolines rustle on all those dancing girls. I was 19, and hungry for something — hungry, actually, for everything: each Parisian glass of wine, each baguette, each bowl of ripe plums. But it was “Luncheon on the Grass” that just about blew the doors off the classroom. At the center of a canvas filled with dark woods is a portrait of frank, unabashed female sexuality and a basket of spilled, red cherries. It might as well have been 1863; I was as enthralled as the viewers of the Salon des Refusés.

“Looking at art in the context of food makes it so much more accessible,” said Maite Gomez-Rejón, founder and owner of ArtBites in Los Angeles. She’d worked in the education departments of plenty of museums, including the Metropolitan Museum of Art and MoMA, but it wasn’t until she developed a class for 92Y tracing the history of food through the Met’s collection that she saw something click. “Suddenly, people became much more engaged and animated. Art immediately became relatable,” she said.

To celebrate the recent 140th birthday of New York’s most magnificent museum, we selected some of our favorite food-related pieces in the Met’s collection — which is online in its entirety, so there goes your afternoon — and paired them, naturally, with something to eat.

Have a favorite food-related piece at the Met that we didn’t include? Let us know by leaving a comment. For more art-centric musings, browse our archives. 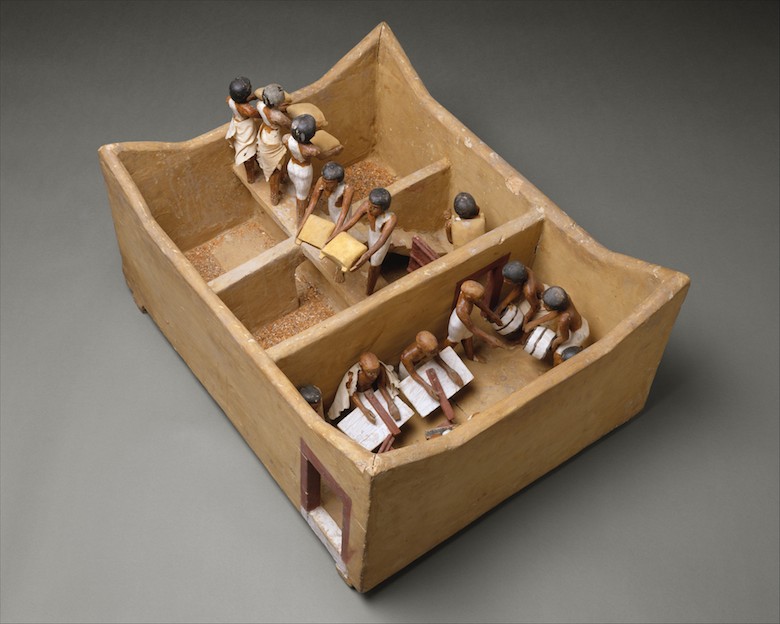 It’s believed that writing was originally invented to record the collection and distribution of grain, beer and bread. Photo courtesy of the Metropolitan Museum of Art.

Model Granary from the Tomb of Meketre

As if pyramids and mummy tombs weren’t mystery novel fodder to begin with, these models (and 22 more) were discovered in a secret chamber. The accessible rooms had been plundered in Antiquity, but in 1920, cleaning out debris to formulate a floor plan of the tombs, the Museum’s excavator Herbert Winlock discovered the models—thousands of years old and in perfect condition.

Writers, beer-drinkers, and carb-lovers, take note of the four scribes in the granary model. Two are writing on papyrus scrolls, and two use wooden writing boards.

“Writing was originally invented to record the collection and distribution of grain, beer and bread,” Maite said. “Going back before the Egyptian hieroglyphs to cuneiform. That’s why writing exists, basically.”

Pair With: “Hummus, pita, and a really good beer.” 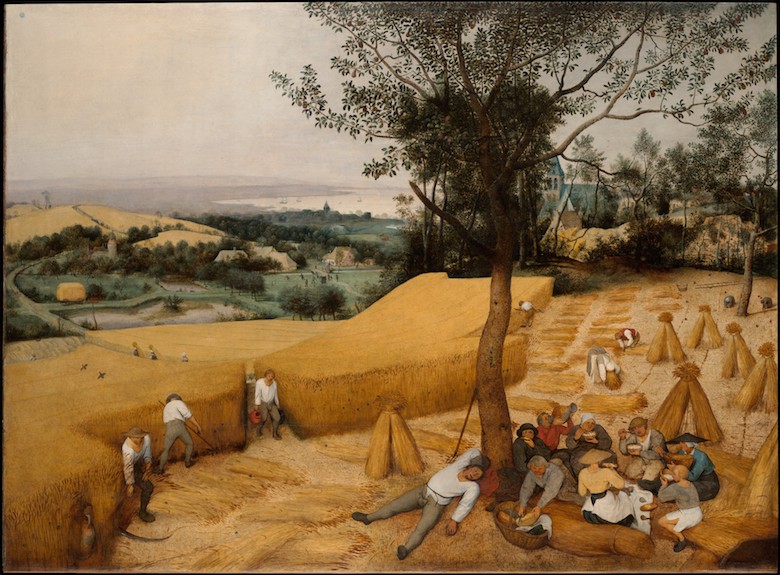 Prior to this 16th century painting, landscapes used religion as their pretext. But this painting is all about real, human life. Image courtesy of the Metropolitan Museum of Art.

“‘The Harvesters’ is such a beautiful painting,” Maite said. “It’s this beautiful slice of life.”

Prior to this 16th century painting, landscapes used religion as their pretext. No God, no clouds. But this painting is all about real, human life, at a time when the Dutch functioned as the granary of Europe.

“These are working class people. They’re working on the wheat, and then they’re sitting down, enjoying their bread, enjoying each other. If you look on the left hand side, in the wheat, there’s a jug that’s keeping cool. I love the guy that’s napping. It gives everything this the human element. It just sort of shows this abundance.”

Pair With: Bread, butter and cheese. (And why not? More beer.) 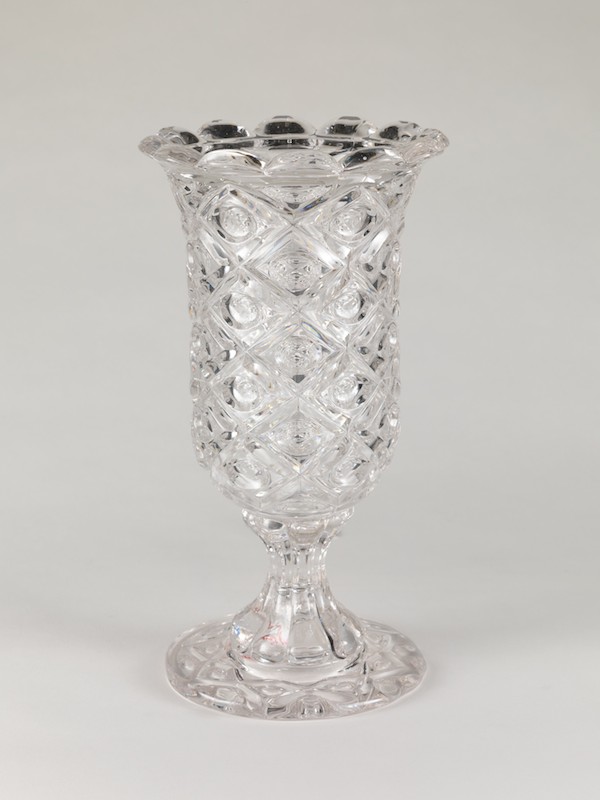 Celery was once considered a status food. Photo courtesy of the Metropolitan Museum of Art.

Imagine a different time: a time when Pittsburgh was a glamour town and the wilting stalks in your vegetable drawer were a symbol of prestige. Then you begin to understand this vase.

“Celery were considered a status food,” Maite explained. In the Victorian era, an intricate blown glass celery vase would have been a required ornament to the fashionable dinner table. ”They would put them in iced water and put celery stalks on the table. Every fine dinner set contained a celery vase. Isn’t that cool?” By the beginning of the 20th century, celery had begun to recline flat on plates when served, and soon after, industrial agriculture made celery cultivation outside the hothouse possible, robbing the green of its elevated station.

“This whole idea of food not being just for sustenance but about smell and about the textures of these delicate sauces, the way they feel in your mouth. There’s this element of the sensuality that’s such a part of French culture that you can kind of feel in this painting, even though it’s just kind of rustic. It’s fruit and cheese and bread and wine but there’s something more enjoyable in it I see.”

Pair With: Bistro food. Roast beef with asparagus or chicken with tarragon and a crisp green salad with a simple vinaigrette. Parfait. 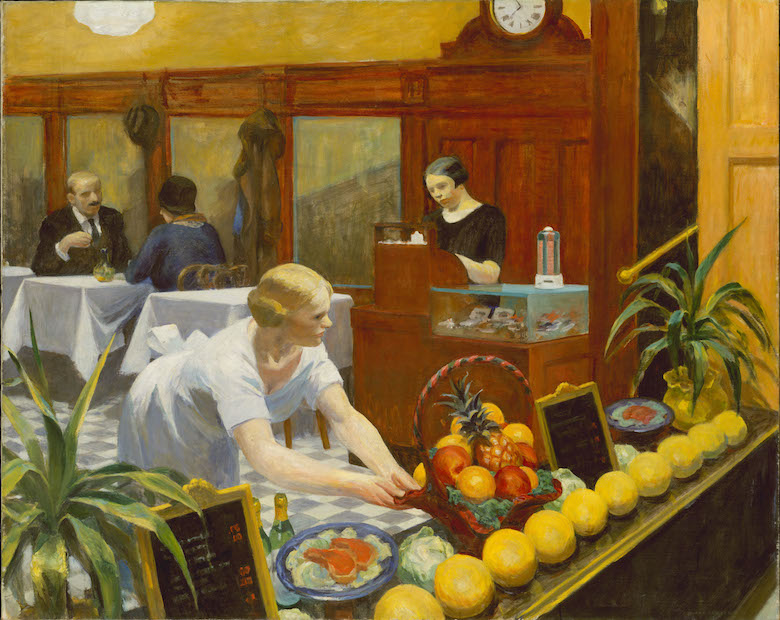 Like Hopper’s later, more famous painting, “Nighthawks,” “Tables for Ladies” has a similar feeling of urban estrangement. Image courtesy of the Metropolitan Museum of Art.

The title indicates an interesting moment in restaurant history. “They’re advertising ‘tables for ladies’,” Maite explained. “Previously, a lot of New York restaurants, like Delmonico’s, had separate dining rooms for women so they wouldn’t be seen as loose women or prostitutes or whatever. They would advertise them for these well-to-do ladies who could sit down and not be bothered. If they were tired from shopping, they would have a private place to go that was separate from the men.”

“There are people in it—there’s a couple, these two women are kind of doing their own thing—but it seems so quiet,” Maite said. “There’s a sense of emptiness.” 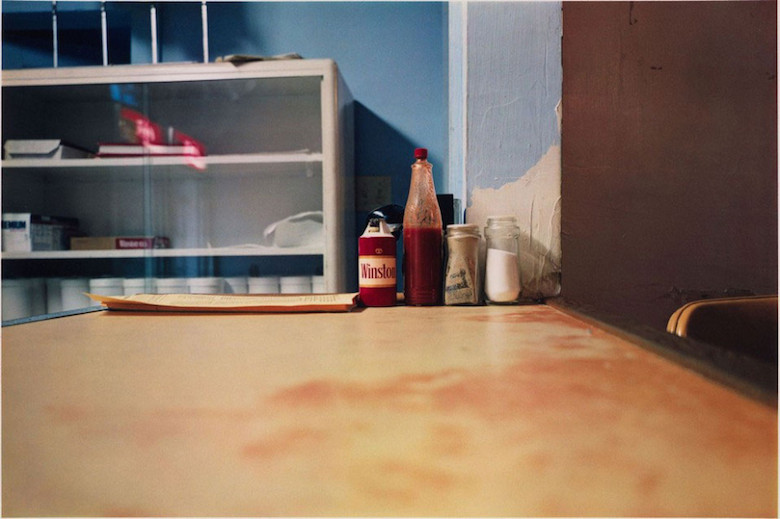 Somebody was there, somebody’s going to be there, but there’s never any warmth. You wonder: Who is eating here? Who are these people? Image copyright of the Eggleston Artistic Trust.

“There’s something of Eggleston’s work that reminds me a lot of Hopper’s work,” Maite said. “In the straight lines, in the flat areas of color; there’s often food in them. And there’s something very lonely about them, as well. It’s almost set up like a painting: the Winston pack, the Tabasco, the salt and pepper. It’s a diner—people have eaten there—but you don’t see a person. So his work feels very transient. Somebody was there, somebody’s going to be there, but there’s never any warmth. You wonder: Who is eating here? Who are these people? They’re so weird and so ordinary and mundane at the same time.”

Eggleston’s Louisiana series is all like this, Maite said. She recalled another image of an open freezer in an exhibition at the Getty that has the same eeriness coupled with a striking formal composition.

“It’s a freezer stocked with food, but it’s all processed. You can tell everything has freezer burn. There’s something kind of sad about it. But the composition is so beautiful. Like this one: it’s a candid shot, but it’s so perfectly composed.

Pair with: Pie and coffee