For nearly five decades, Project Renewal has had the foresight and humanity to actually treat the problem of homelessness rather than criminalize it. 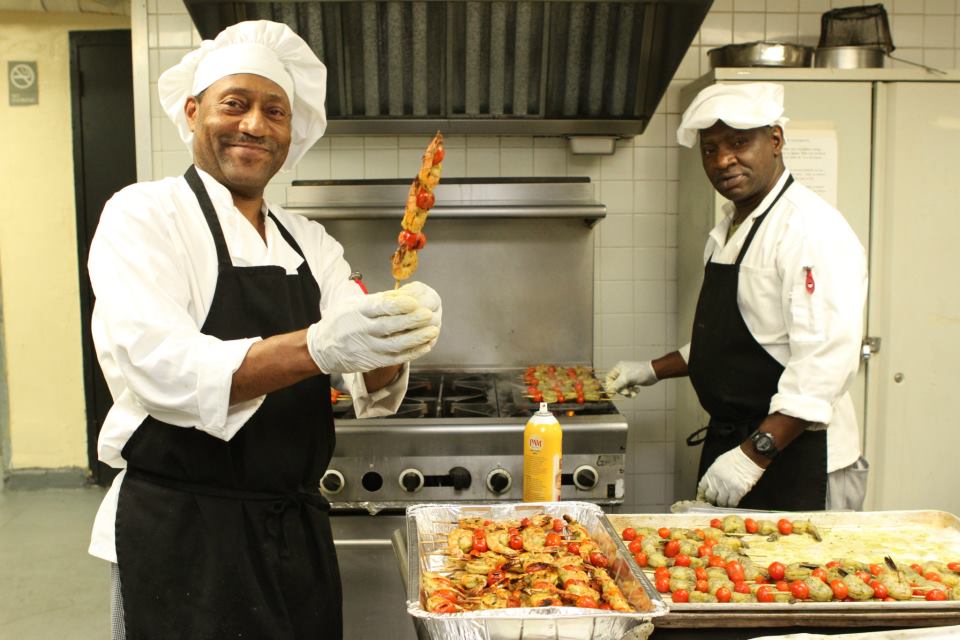 “Give me your tired, your poor… Send these, the homeless, tempest-tost to me, I lift my lamp beside the golden door!”

These noble words from the Statue of Liberty may well have been inscribed on the doors of Project Renewal. For nearly five decades, the innovative Bowery homeless shelter has had the foresight and humanity to actually treat the problem of homelessness — and the mental illness and addiction so often accompanying it — rather than criminalize it.

Project Renewal started a trailblazing culinary arts job training program in 1995. Spearheaded by Barbara Hughes and Stephanie Coles out of the Vera Institute of Justice — who continue to serve as the forces behind it — the award-winning NYC-based program was the first known one of its kind at the time and has served as a job training model across the globe ever since (they graduated their 75th class this past spring).

The six-month program offers 12 weeks of kitchen training (that includes an optional pastry baking segment) and 12 weeks of internship, followed by ongoing job placement services. Classes are held two to three times daily and students receive basic culinary instruction including knife skills, food prep and cooking in addition to acquiring their food handler’s license. A regular in-house spin of an Iron Chef competition adds some excitement to the early training when, says Hughes, “We’ll grab different people that work in the shelter and they’ll come down and judge the contestants or teams.” This, she says, “the students just love.”

During the internship segment, aspiring chefs get apply their skills while serving corporate cafeterias throughout the city via food service organizations like Compass Group, Flik and Aramark. Occasionally an exceptional intern might land at Del Posto (with whom Project Renewal has a special relationship) but for the most part, corporate kitchens are a better fit given their set structure of early, regular hours and the absence of alcohol.

Entry into the program requires a 90 day period of being clean and sober that needs to be maintained in order to stay. Throughout the program, students receive counseling and guidance in “soft skills,” like timeliness, hygiene, attentiveness and working well with others, which go a long way toward keeping a job once they get one — and most do. For those who complete the program, there’s an 80 percent employment success rate.

The outfit also has its own catering company called Comfort Foods, a social enterprise that helps offset costs of the program. It’s staffed mainly by former students, which helps to fulfill the nonprofit’s employment mission. In addition to providing food services to Project Renewal’s own shelters, Comfort Foods caters private and corporate events while also suppling meals throughout the city shelter system.

Project Renewal has been an important resource to many, but one success story that stands out is a man who, after serving 20 years in prison, went through the culinary job training program, interned and secured a job with Del Posto. He eventually decided that it was for a younger man than himself, so he returned to the catering business to eventually run Comfort Foods.

In addition to critically acclaimed restaurants, Project Renewal’s reach in the food world also extends to Renewal Farm in Garrison, NY where men in a longer-term drug and alcohol rehab acquire job training on a farm. Here, they grow vegetables that make their way to local farmers markets and farm-to-table restaurants. While distance makes for only a loose affiliation with the farm, Hughes is motivated to strengthen the relationship to the Bowery; in fact, there’s talk of starting a greenhouse out back so students can “see the beginning of it and the end of it — growing it, prepping it, making something out of it and sending it out the door to feed someone,” says Hughes. For now, the dream is filed under “funds permitting.”

In the meantime, they’re looking to expand the kitchen services and have made strides toward providing culinary job training for veterans. Now in its infancy with hopes for expansion, a satellite kitchen is as of this year operating out of a second location at the Borden Avenue Veterans Residence in Queens.

While the premise of the culinary job training program is fundamental — reintegration into society requires financial self-sufficiency and there are jobs in the food industry — there seems to be more at work here. During the chaotic days of Hurricane Sandy, says Hughes, “Comfort Foods never stopped delivering food. I had a full staff of people here. Not one meal was missed being delivered by the operation.” She recalls the response of employees who stayed consecutive nights at the shelter during the crisis so they could be at the food-serving frontlines: “Well, people have to eat,” they emphatically replied. Hughes says, “You know, everyone is very aware of who they’re making the food for, who they’re serving it to, what this means. I don’t know, I think it’s one of the things that makes up the core of our being.”