When I read a couple of weeks ago that WD-50 was closing – possibly to move elsewhere, possibly not – due to the cannibalistic, devour-your-young realities of NY real estate, I froze for a second. 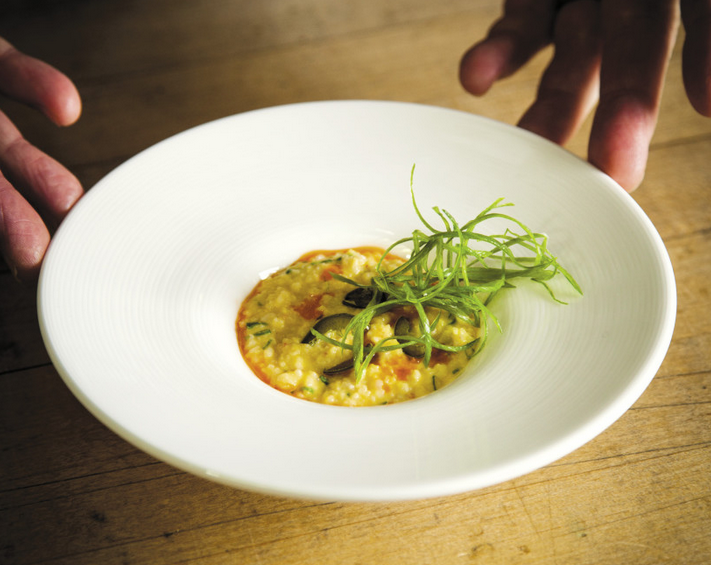 When I read a couple of weeks ago that WD-50 was closing — possibly to move elsewhere, possibly not — due to the cannibalistic, devour-your-young realities of NY real estate, I froze for a second. In the 11 years Wylie Dufresne has been open on Clinton Street, I realized I’d never, ever dined there. Not once. I had tried. Reservations would be attempted, only to find availability in the nosebleed seats of 10pm on a Tuesday night in February. Sigh. In my impatient consternation, I’d say, thanks, but no thanks; I’ll just try another time. That is, of course, until there is no other time. The time being now.

It’s been a tough month in NYC’s eat/drink world. Union Square Café announced its closure and subsequent relocation; Broome Street Bar is nearly gone, daddy, gone. Adding salt to the wound, the once bagel-fragrant H&H factory is becoming a multi-million dollar event space. Dufresne’s last day of service there (you can still go to Alder, the gods willing) will be November 30th, a few short months from now. I walked away from reading that bad news and went right to the res board — best seat I could get: a table for two at 9:30pm on a Wednesday night. I emailed my friend Tracey, someone who always says yes, be it for a band, or a trek, or a dinner, because I knew that was the spirit I needed across from me. I didn’t want a doubter or a picky eater; I wanted to be in the company of someone who would was ready for all I’d read about Dufresne and his reputation for experimental kitchen shenanigans. And so last night, we went.

It’s kind of funny when a reputation makes you think you know exactly what to expect. Eating at WD-50 was a lot like making my first trip to Paris as an adult, not that many years ago. I was worried: Could it really be as great as people say? Probably not. I steeled myself for disappointment because, like movies or books, anytime anyone sings such lifted praise, the higher it is, the longer the drop. I set my expectations on “It’ll be nice.” Well, as it turns out, Paris was a lot better than nice; it was every wonderful thing everyone said it would be. And so was WD-50.

As Tracey and I wandered up Clinton on our way there, I wondered if we’d missed the heyday. Like seeing the Rolling Stones in their 70s as opposed to in the ’70s. If the once-groundbreaking eatery would inevitably show its weariness in the sights, smells and flavors that awaited us. And would Dufresne even be there? I thought about the couple of occasions that I’d interviewed the chef before, always remarkably polite and kind in a way that I found surprising. With the lauding he’s received, after all, it wouldn’t be so odd if he were, instead, throwing around the importance and weight he holds in the culinary world. Instead, he always seemed more like the kind of local culinary celeb you’d like to go share a beer with and shoot the breeze.

We pushed in and, lo and behold, there he stood in the doorway to the remarkably organized, uber-clean open kitchen, talking with a man who looked like he’d eaten more than his share of decadent meals out. Not Dufresne, though. A healthy looking slender, he appeared calm and contemplative, his red hair still cut in a longish bob and his nerdy, plastic-framed glasses perched on his long nose. He didn’t look a day older than when he opened WD-50 more than 10 years ago. And, actually, neither did the restaurant. The usual signs of wear and tear on any join that feeds hungry New Yorkers night in and night out were thoroughly absent. The walls looked freshly painted in their bold swathes of teal, tomato red, and blue. The wooden accent walls were unmarred, as was the attitude of the staff. All seemed as brand new and fresh as if the place had just opened only a few months ago.

But it was the food that took my breath away and made me realize: I’d misunderstood what he was doing all along. Reading about something is one thing. We can armchair travel, and even virtually dine, from screens and pages, learning the streets and tables and sights of a place without ever darkening a door. The reason WD-50 matters so much is because what Dufresne does is reveal food in all its beautiful, fleeting glory. His much-written about techniques aren’t so much about flash or trickery or magic transformations; they’re about revelation. An amuse of fresh mozzarella formed into a flower bud with a slip of dehydrated tomato and delicate dollop of pureed basil didn’t look like any caprese salad I’ve ever had, all compact and eensie on my plate, but my god, it smelled and tasted of summertime in my Dad’s garden in Long Island, and filled my mouth with such intense, lovely flavor. It was transporting.

A lamb tartar came topped by a sturdy, small rectangle of, I was informed, béarnaise ice cream, two little triangles of spicy pickled Asian pear with a paste-like texture, and a swathe of Amaro gelée. As the creamy béarnaise melted, it acted like an ice cube in a drink, allowing a slow reveal of the aromas and flavors that were accented by all the little components that were there to play along and harmonize — spice, bitterness, tang, sweetness. The wine was unexpected, too: I had an albarino from Uruguay; a gamay from the Canary Islands; a vermentino/grenache blanc from Berkeley. The meal continued on and on like this through each course — the unfamiliar taking off its disguise and revealing itself thoroughly and purely in the end. Up was down; black was white. And yet, I walked away from that meal with the clarity of all these perfect and pure flavors singing in my sense memory.

I’m happy I didn’t let WD-50 slip through my hands, and I’m even more happy that my unfounded fears about his food were dead wrong. He doesn’t mask ingredients, as I secretly feared; he celebrates them. After all these years of assuming that the chef’s rep for science-lab technique would leave me lost, I learned last night that it’s exactly the opposite. Every twist and turn was there to simply re-introduce me to things I already knew, but maybe needed to be shown how to appreciate again from a different angle.