Where, and Why, You Should Be Going Out on the Upper East Side

“Let’s do dinner uptown,” said no one ever—until now. 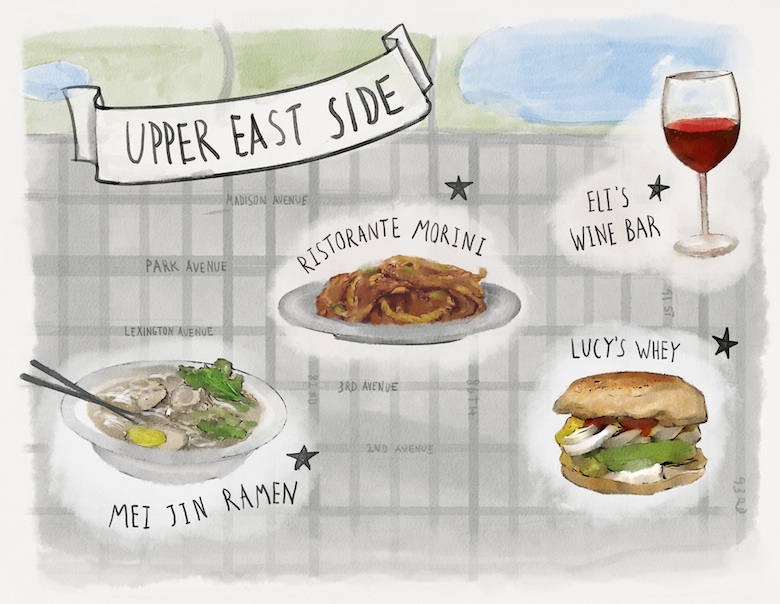 When I arrived on the Upper East Side three years ago, the neighborhood, as far I could tell, was a place where denizens happily paid high prices for mediocre food. An expertly made cocktail came in plushy upholstered surroundings with a side serving of the European jet set, and the best thing you could say about dining rooms was that they were mercifully quiet and conducive to grown-up conversation.

No more, however. “There’s a real renaissance in food going on now on the Upper East Side,” says Eli Zabar, whose own Eli’s Wine Bar, opened last spring, has contributed to the change.

Try East 75th Street and First Avenue’s Seamstress, the brick-walled, rustic-wood-floored home to cracking good mixed drinks and American heritage food of the Northeast. As the neighborhood has skewed younger, co-owner Steve Laycock and partner Josh Mazza realized that what it was missing was a late-night place for drinks and snacks. They opened The Gilroy, focusing on craft cocktails and small plates on Second Avenue at 81st in the summer of 2013, and then Seamstress on Valentine’s Day 2015. The Gilroy and its kitchen are open until 4:00 a.m. every night; Seamstress is open until 4:00 a.m. on weekends and till 2:00 a.m. Sunday through Thursday.

Pamela Wiznitzer, formerly of The Dead Rabbit, created the elegant Seamstress cocktail list, including the best-selling “Mortimer & Mauve” (Whistle Pig rye, chai vermouth, Barrow’s Intense Ginger liqueur) and the Tabletop (Roca Reposado, thyme, lime, celery soda, pink salt), and chef Will Horowitz turns out crowd-pleasers like his rib eye for two, smoked and fried yardbird with preserved citrus thyme oil and chili garlic honey, and mutton burger with triple-crème cheese and buttermilk-fermented carrots. Raw bar offerings are pristinely fresh, like the Rocky Point oysters and the scallop crudo special, fresh off the boat from Long Island, that was on offer one night.

In addition to drink professionals from across the city, Seamstress regulars include couples from across the street who can stop by with their baby monitors and summer weekday solo dads who want a steak and a good bottle of red wine.

Just off Madison on East 92nd, look for Table d’Hôte, chef-owner Bill Knapp’s charming pocket restaurant. Trained at Gramercy Tavern and Craft, Knapp met the former owners of the restaurant, Vivek Bandhu and Lauri Gibson, when he served as best man at the wedding of his buddy, Lincoln chef Jonathan Benno (the couple is aunt and uncle to Benno’s wife). Bandhu and Gibson talked Knapp into buying the restaurant, which he opened on a shoestring in September 2011, keeping the French name to save the cost of changing it. Knapp’s mom made the toile de jouy curtains, he put up a chalkboard, bought a few pots and pans and opened for business. He cites lessons from his stint working for Tom Colicchio at Gramercy Tavern as his biggest influence: “Buy the best ingredients and let them speak for themselves.” Customer favorites include his perfectly prepared octopus (braised in court bouillon, charred on the grill, tossed with lemon confit and garnished with fennel) and his off-the-menu rack of lamb with thyme butter, which in fall is served with Kalamata olive spätzle, roasted tomatoes, lemon confit and braised escarole. 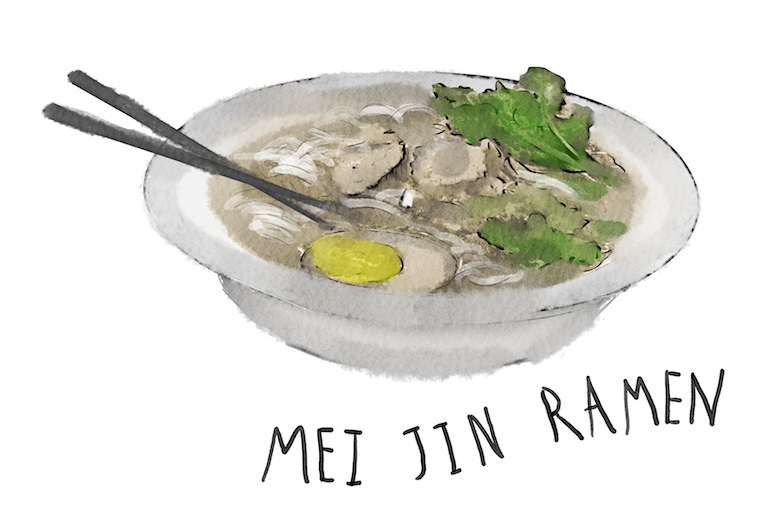 Like the rest of Manhattan, the Upper East Side has not been immune to the salty, fatty charms of ramen. At Mei Jin Ramen, under-the-seat containers for handbags and menu items written in Japanese on wall-mounted wooden plaques lend the 50-seat room the air of contemporary Japan. Mei Jin opened its rustic wooden doors in August 2014, with chef Koji Miyamoto in the kitchen. A native of Nagoya, Japan, Miyamoto’s specialty is a beef broth ramen, which comes in three versions: soy, spicy chili and miso. The restaurant’s most popular dish, says manager Oh Ohkan, is the miso version, garnished with corn, arugula, bean sprouts, bamboo shoots and chili oil, and among non-ramen mains, the pork katsu curry. 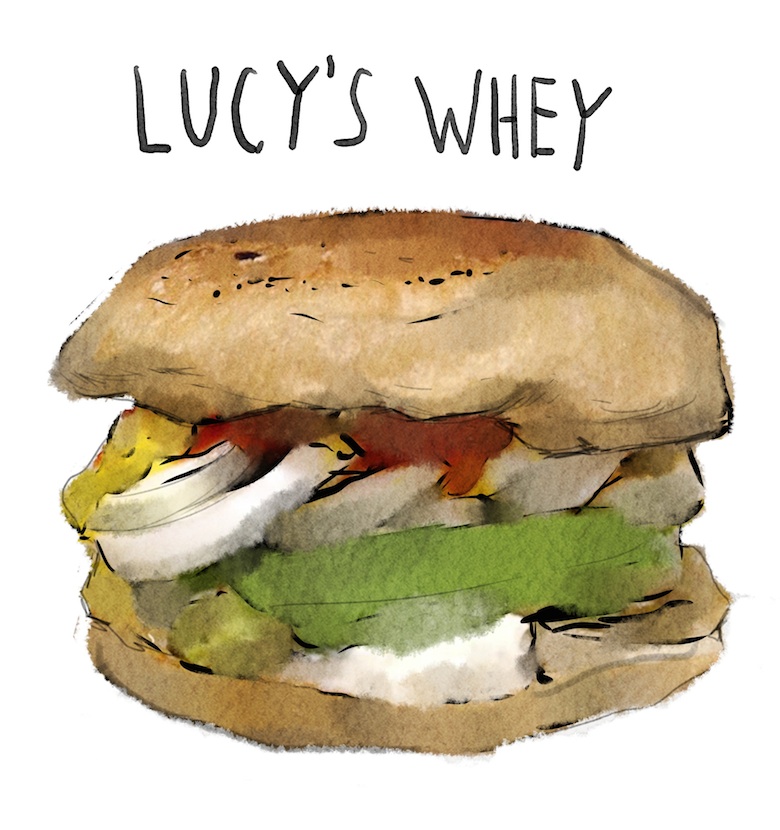 On Lexington near 93rd Street, Lucy Kazickas has opened a branch of her Chelsea Market cheese and specialty food store, Lucy’s Whey. So many customers at her first shop in East Hampton (which closed in the fall of 2013) asked her to open on the Upper East Side that she finally obliged, teaming up on this venture with co-owner Jackie Mitchell. Originally planned as just a cheese store, the larger space allows for prepared foods for takeout and a 22-seat dining and counter area. Retail manager Tess McNamara, who arrived via Murray’s Cheese and Italy’s Slow Food University, has forged relationships with small local producers and stocked standouts like Vulto Creamery (Walton, NY) cow’s milk Miranda that’s been washed in absinthe, and a variety of European cheeses. Kazickas has laid in a treasure trove of small-batch products, both domestic and foreign, and beers.

Open for lunch and dinner on the weekdays and brunch and dinner on weekends, standouts include cheese and charcuterie plates and a weekend brunch sandwich of housemade English muffin, soft-boiled egg, avocado, labneh, pickled onion and hot sauce. Chef Caleb Hill shops the Greenmarket three times a week and creates a weekly market-based soup special; the white cheddar and fig jam sandwich and kale and quinoa salad have won devoted followings.

The aforementioned Eli’s Wine Bar opened in May on Madison and 91st to fill a niche Zabar had noticed: There were no good late-night wine bars in the neighborhood. Twenty different, reasonably priced, wines by the glass are offered nightly till 1:00 a.m., served with a generous helping of wine knowledge. “What I want to do at 91st Street (the wine bar) and Eli’s Table (his more spacious Third Avenue restaurant, which reopened in late 2014 after a space and menu overhaul) is to educate people,” says Zabar. “I want you to go away knowing more than you did when you sat down.” Wine director Randall Restiano (who holds the same title at Eli’s Table) and manager Kim Akhtar will offer you detailed descriptions about the all old-world, predominantly natural, organic and biodynamic wine list. The menu is stocked, says Zabar, with his favorite dishes from Eli’s Table (hamburger sliders, housemade lamb sausage and savoy cabbage, veal Milanese), more gently priced but still sourced from his network of purveyors like Fishkill Farms for eggs or Pike Farm for its delectable Long Island corn.

At Eli’s Table, diners have access to Zabar’s 16,000-bottle wine cellar, and the pick of ingredients from the 20,000-square-foot Eli’s Manhattan grocery store next door. 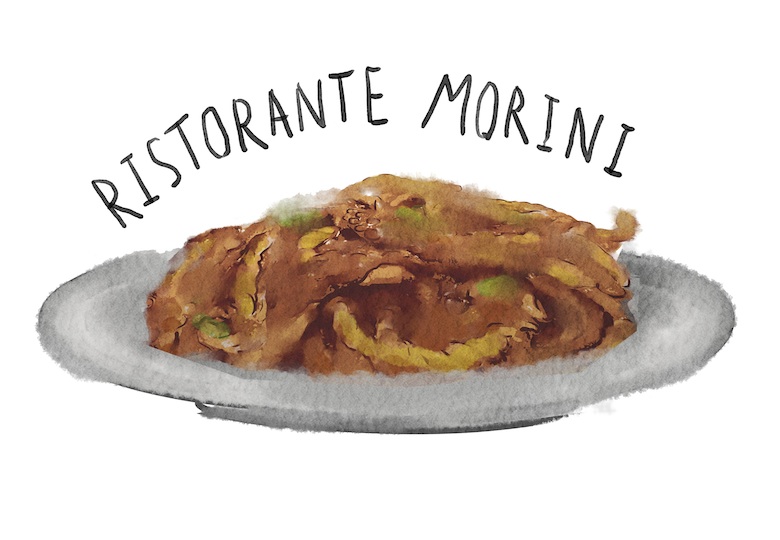 The opening of chef Michael White’s Ristorante Morini on Madison Avenue in December 2013 as the higher-priced sibling to downtown’s Osteria Morini seemed to hew to an unstated high-ticket Madison Avenue tradition. But the globe-trotting chef was in for a surprise when locals balked at the menu pricing, prompting managing director Rocky Cirino to suggest dropping prices by 10 percent. Now, a friendlier price point, after-8:30 p.m. pasta specials meant to lure young patrons from east of Lexington Avenue and a takeout menu provide more options. Chef Gordon Finn says he looked at the most popular dishes — the pork chop, brodetto di pesce, veal chop and lobster al forgo — and has begun offering them as daily specials. The Sunday family-style supper ($49 per person, $25 for children) features three expertly prepared appetizers, mixed grill and warm bonboli for dessert; pasta-making classes and wine tastings are another draw. “That’s what being a neighborhood restaurant is all about,” says Finn. 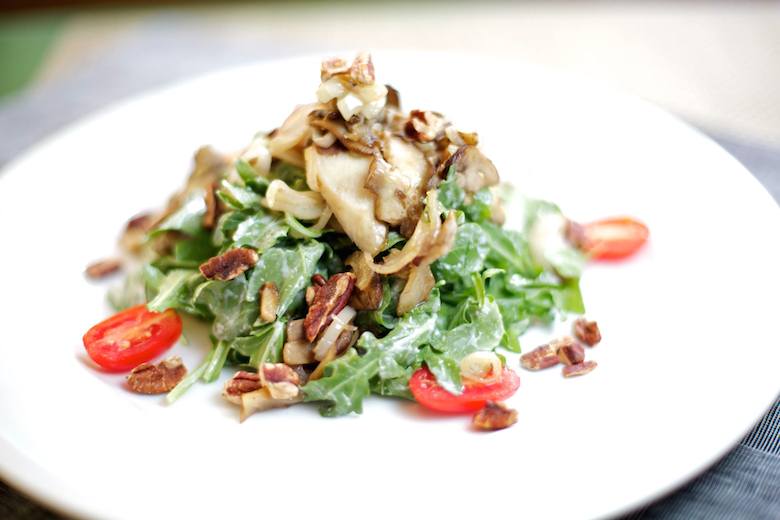 Candle Café opened in 1994 and is the first “certified green” restaurant in the city according to the Green Restaurant Association. Photo credit: Facebook/Candle Cafe

Amid all the new, let’s not forget the Upper East Side of old. A number of quality holdovers remain, one of them the venerable vegan restaurant group that includes Candle Café and Candle 79 and has served four generations of Upper East Siders. When a former art dealer turned health nut named Bart Potenza took over a landmark, candle-filled juice bar at Lexington and 71st in 1984, he renamed it The Healthy Candle and expanded it from a juice bar and vitamin shop to a full-service vegetarian café. Teaming up with nutritionist and eventually his wife and partner Joy Pierson, the couple won $53,000 in the New York State lottery, allowing them to launch the first Candle Café in 1994, serving organic vegan fare and becoming the first certified green restaurant in the city (according to the Green Restaurant Association). The couple opened the  more upscale Candle 79 in 2003, a serene, two-story temple to refined vegan and organic fare, where chefs Angel Ramos and Jorge Pineda turn out globally inspired food with produce from over a dozen local farms. Customer favorites include the seitan piccata with grilled asparagus, fingerling potatoes, oyster mushrooms, lemon caper sauce; Moroccan spiced chickpea wraps; polenta fries, and an extensive gluten-free menu.

The bar, adds Pierson, is stocked with “alcohol with a mission,” all of it certified organic and biodynamic. Every time a Tree Hugger cocktail (Veev Açai liqueur, hibiscus liqueur, mezcal, huckleberries, lemo, basil, agave) is sold, “a tree is planted in India,” she notes, adding that Candle 79 sales have accounted for over 9,000 tree plantings.

Another old-time classic, though on the other end of the vegan/meat spectrum, is Pastrami Queen, which dates back to the early 1960s when it opened on Queens Boulevard. For the past nine years it has dispensed pastrami and roast chicken from its perch on Lexington near 78th Street. Manager Jack Turner says the pastrami is made the way it always has been, brined in a salty liquid (the exact contents of which are a house secret), dried, seasoned with herbs and spices, smoked, then steamed until the fat melts and the meat reaches a texture fit for pastrami-loving royalty. Made in-house every day, the restaurant, which does dine-in, takeout, delivery and ships anywhere in the contiguous U.S., goes through 600 to 700 pounds of brisket a week and caters to a mix of die-hard regulars who have a standing order for the Shabbat Special (rotisserie chicken, two sides and a soup), local workers, students and tourists from around the world who have read about PQ in their guidebooks. 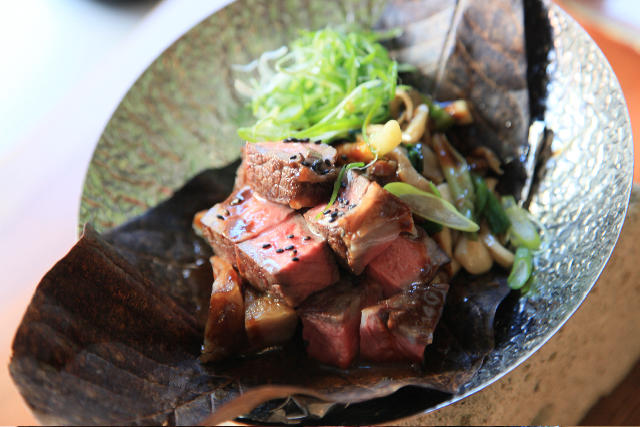 Another longtime favorite of mine is Donguri. Formerly operated by the Japanese tea company Ito-en, the restaurant’s chef since June 2014, Yorinobu Yamasaki, is an alum of another Ito-en restaurant, the former Kai on Madison Avenue. The rustically appointed 21-seat restaurant serves a range of beautifully prepared Japanese food from housemade tofus, pristine seafood appetizers such as sea urchin with dashi jello, sashimi, tempura to mains that meld Western techniques and Japanese ingredients (and draw on Yamasaki’s experience cooking at a French restaurant in Kobe, Japan), seasoned rice bowls topped with raw fish, noodles and daily seasonal specials.

Menu standouts include the ethereally light and flavorful corn tempura, raw fish, sesame tofu and the daily specials. Yamasaki sources his fish locally and from Tsukiji market in Japan, and his specialty Japanese vegetables from Suzuki Farm in Delaware.