The City’s Visionary Fast Casual Chains Scale Up for Good

We caught up with Dig Inn and Sweetgreen founders to learn more about the business behind their quick rise. 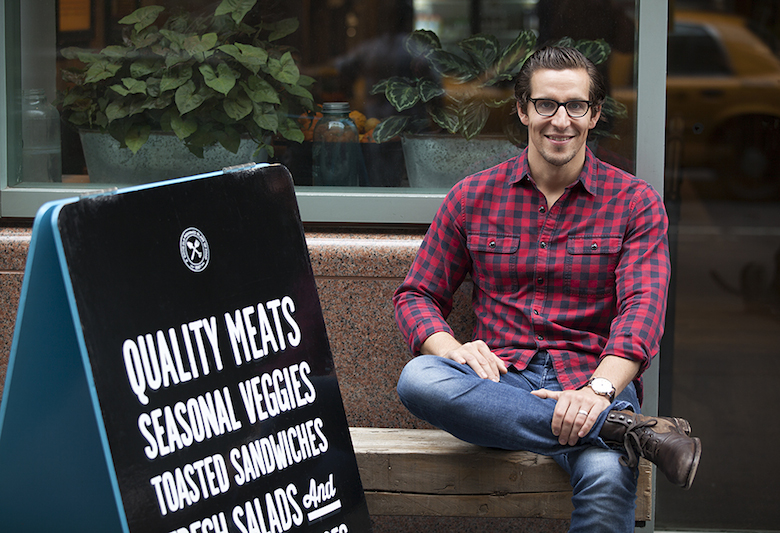 Convinced that customers should be able to go into a place that serves fast, convenient, affordable and delicious food that’s good for them, Dig Inn founder Adam Eskin pursued a “fast casual” concept. Photo courtesy of Dig Inn

If you’re ever in Midtown or below during weekday lunchtime, you’ve likely noticed that fast casual joints are trending hard these days. Lines of customers craving tacos, quinoa combos and salad bowls seem to bottleneck the sidewalks on every other block.

Menus composed of whole, straight-from-the-farm ingredients are a common marketing narrative for many of these chains including Chipotle, Fresh & Co. and Chop’t, which made us curious about what effect fast casual’s rapid growth might have on the larger local food system. We caught up with two of the city’s farm-to-counter front-runners, Dig Inn and Sweetgreen, to find out more about the sourcing and PR fuel behind their quick rise.

New York City’s fine diners have long had the luxury of farm-fresh produce on their plates thanks to pioneering boutique restaurants like Telepan, Savoy and The Green Table. The next frontier in creating large, systemic change though — as well as to capitalize on the demand for local and seasonal ingredients — is a scale that is commensurate with the problem. Like, say, something like McDonald’s for example; enter the potential of fast casual.

The timeline of convenient food’s growing social and environmental conscience arguably started in 2001 with the release of Chipotle’s mission statement, “Food with Integrity,” which declared their commitment to serving meat from responsibly raised animals, whole ingredients and local produce. For a variety of reasons, with this marketing campaign included, their business, along with ones like it, have skyrocketed so fast that even fast food behemoths are feeling the heat.

Dig Inn and Sweetgreen are some of the relatively newer players in the game who are advancing the visionary fast food approach: For around $6 to $15 a pop, they’ll serve you a lunch straight from a growing list of nearby farms. Their food is tasty, too, which gives eaters all the more reason and ability to make healthier, more environmentally sustainable choices.

This initiative, and its tremendous reception, is blazing the trail for what Sweetgreen calls the “win, win, win” system where the customer wins by affordably getting a fast, enjoyable, nutritious meal; the community wins from fast casual’s support of the local economy and environment as they purchase from regional farms with more conscientious growing practices; and the companies win by making bank, ultimately grabbing the attention of traditional fast food establishments. 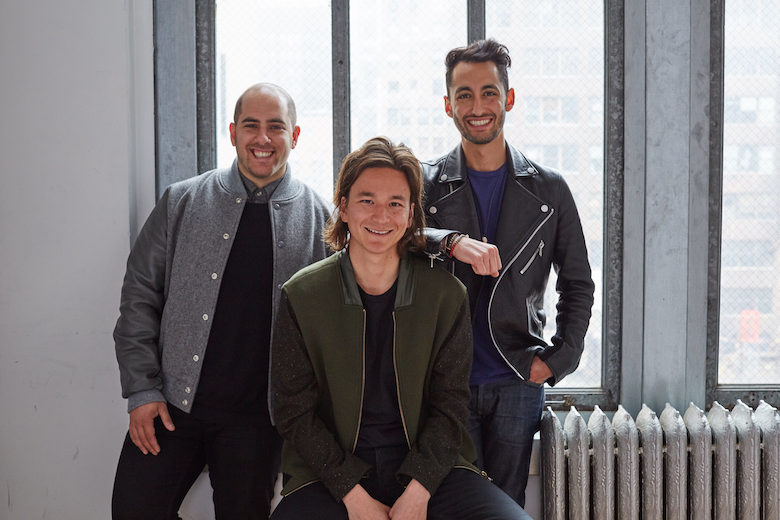 Seems like an impressively holistic business model, and when described by Dig Inn founder Adam Eskin, it makes even more sense. Eskin, who comes from the financial sector, made his entry into the restaurant world first as an investor and then as chief executive of a fitness-oriented restaurant chain called the Pump, whose main food focus was on calorie counts and nutrition. Having grown from “a chubby kid” into a fit adult, he says, “from my perspective it certainly spoke to where I came from and how I ate at the time.” But the operation’s numbers weren’t working and Eskin recognized that the fitness craze, with its protein powders and fad diet,s was not the way of the future. “Ultimately my recommendation was to throw it away and start over, and so that’s what we did,” he says.

According to Eskin, they had an early idea for the former chain’s new incarnation that made sense on so many levels despite being uncharted territory. “The concept was if you could deliver really high-quality fresh-prepared food, mindfully sourced from farmers with whom we could have a conversation, and that food was delicious and affordable… that’s something that people should want.”

Convinced that customers should be able to order from such a place, Eskin pursued the concept with hope that it would be well received. “It turns out that’s correct,” he reports.

Eskin refers to the continuing evolution of Dig Inn as an iterative rather than linear process, particularly given their food’s seasonality; it sometimes takes a full calendar year to apply lessons learned. Still, the long but fast-moving lunch lines out the door don’t lie: The demand is there. And as they continue to scale up, Dig Inn’s business ethic is one of continual improvement while meeting this demand. As Eskin says, “We just operate under the assumption that tomorrow we have to be doing better than we are today.”

Eskin refers to the continuing evolution of Dig Inn as an iterative rather than linear process, particularly given their food’s seasonality; it sometimes takes a full calendar year to apply lessons learned.

Their most recent iteration came this spring in the form of new culinary director hire Matt Weingarten, an ICE grad who cheffed at Savoy and Inside Park before scaling up his sustainable food credentials as culinary director at food service giant Sodexo. He also serves as chair on the board of directors of Chefs Collaborative, a nonprofit network of culinary professionals striving to see that chefs everywhere source sustainably for the greater good of the food system.

“The idea of changing the system at scale has been something that I’ve been on a personal/professional mission about for the last decade,” says Weingarten. While he credits boutique farm-to-table restaurants for helping lead this movement’s way, he saw the promise of heftier purchasing power. As an example, he says, “Now, it’s great I buy half a crate of peaches at the farmers market, but once you get to know that farmer, you’re like, ‘Wow, what this farmer wants me to do is buy his orchard and secure that from the beginning so it’s grown the right way, so it has a distribution place to go.’”

Working directly with farmers and contracting giant orders from them for up to a year in advance, farm-to-counter fast casual spots are able to provide just that.

While the mission motive is strong, taste leads the charge in the crusade. As Weingarten says, he’s “a big believer in leading with deliciousness,” and among his many responsibilities is making sure the recipe quality is controlled from the concept to the plate. With an estimated 6,000 plates weekly and counting, it turns out Dig Inn is just the venue for effecting change in palatable ways.

Eskin attributes the growing demand to the times, “People are becoming more educated and they’re learning more, and as they read and learn and watch, the idea that this food is something they should be consuming is becoming more prevalent, and so more and more people are lining up to try it.”

The founders of Sweetgreen — Nicolas Jammet, Nathaniel Ru and Jonathan Neman — couldn’t agree more. Nor could their illustrious investors — including Danny Meyer, Daniel Boulud, Stonyfield Farm founder Gary Hirshberg and the Batali & Bastianich Hospitality Group — who have been steadily lining up for the concept since the beginning. 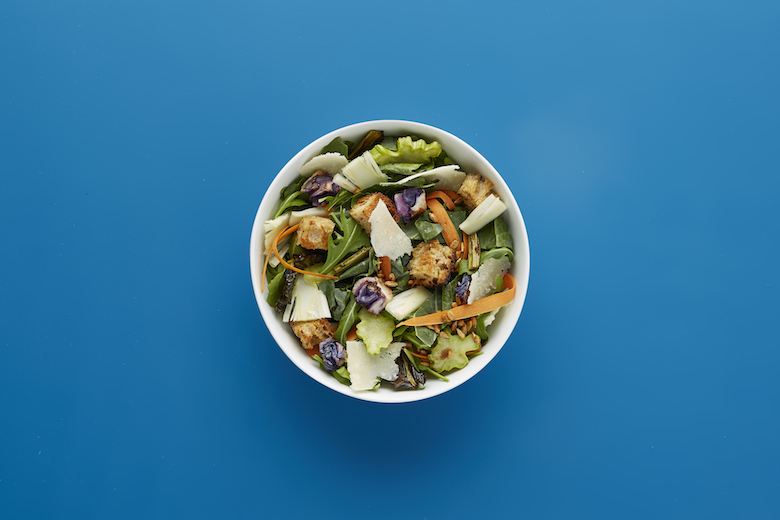 Sweetgreen has collaborated David Chang, Mark Bittman, Kendrick Lamar, Blue Hill (pictured here) and others, each of whom got their own signature salad on the menu. Image courtesy of Sweetgreen

“We looked around [while in college at Georgetown] and we didn’t understand why there wasn’t a brand or an option in fast food that was healthy and transparent and made you feel good and fit our lifestyles and, you know, was food that you could feel great about engaging with,” says Jammet. “And so we decided to build that ourselves. And it’s been a really fun eight years.”

They’ve expanded up along the Eastern Seaboard since 2007, starting out of a modest Georgetown fixer-upper to now standing twenty three strong. On top of all this, they host an annual music festival, featuring A-list headliners and curated concessions like Shake Shack, Luke’s Lobster, food trucks and artisan food vendors. They’ve also collaborated with David Chang, Mark Bittman, musical talent Kendrick Lamar and Blue Hill, each of whom got their own signature salad on the menu. While star-studded features may capture attention, it’s all part of the founders’ vision that they hope to grow and sustain.

“When we think about building this business, it’s more than just about the food we serve in the stores,” says Jammet. “It’s about the farmers and producers that become our partners. It’s about the team members we hire that become part of the experience; it’s really about the full ecosystem, the full community.”

Ultimately, Dig Inn and Sweetgreen’s business decisions come from following ideas to their natural conclusions. If you want to serve healthy food, then you want unprocessed ingredients that have not been subjected to a lot of pesticides, herbicides and fertilizers. If you want delicious food, you’ll want it to be as fresh as possible, which argues for nearby sourcing. And if you want food to be accessible to as many eaters as possible, you’re going to want a competitive price point. The next thing you know, you’ve got a fast casual restaurant serving delicious, healthy food at affordable prices.

“It all makes sense,” says Weingarten. “I don’t think you can make another choice if you really are looking at what you’re doing.”