Where to Stay, Eat and Drink in Boston

While it’s easy to chalk up yet another staycation in the five boroughs, there’s more than a weekend’s worth of tasty reasons to hit the road. 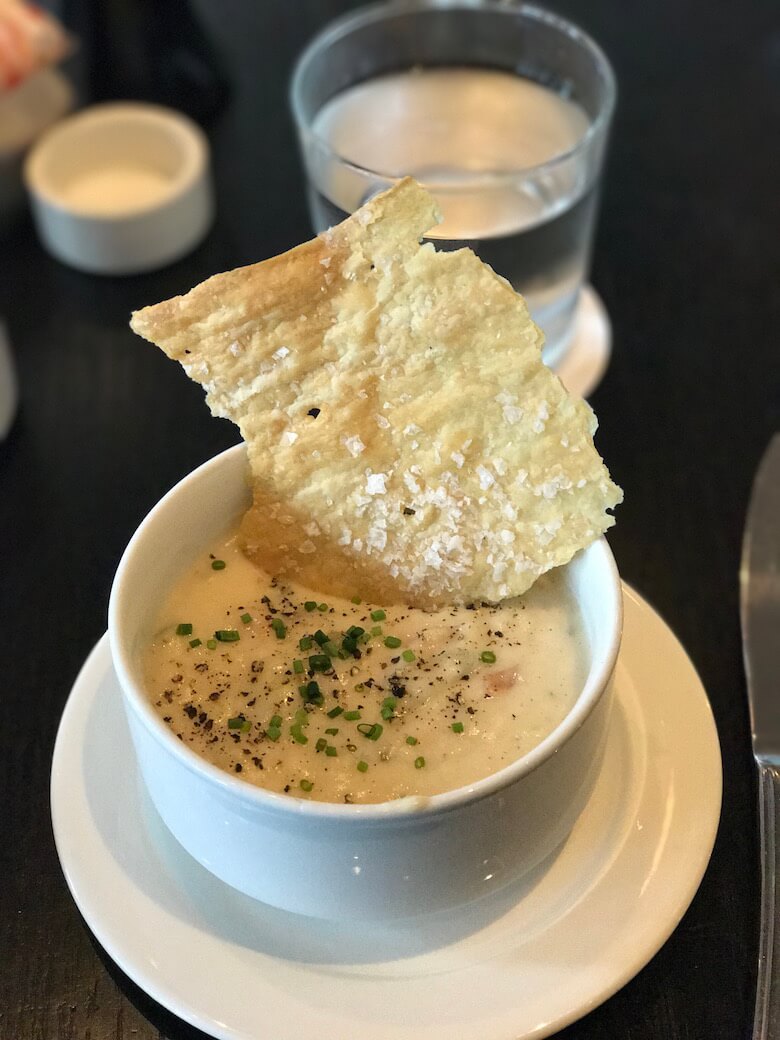 Chowder becomes something very special at Row 34 with a housemade saltine cracker. Photo by Alicia Kennedy.

Boston is one of those ancillary cities New Yorkers often forget about because it’s so close (only four hours!), yet so far away (four hours is kinda far!). With Cambridge just across the Charles River, you basically get a two-fer of excellent eats from restaurants featuring award-winning chefs like Barbara Lynch, Matt Jennings and Ken Originer to old-school seafood standbys (oystahs and chowdah, anyone?). While it’s easy to chalk up yet another staycation in the five boroughs, there’s more than a weekend’s worth of tasty reasons to hit the road. Here are a few to get you started.

Downtown Boston is admittedly…weird. Neighborhood attractions like chain stores and the occasional drunken fighting couple might not sound like a ringing endorsement, but the area is starting to change thanks to newcomers like this upscale boutique property that opened about two years ago. Rooms are plush and quiet with tech-friendly gadgets like smart streaming HDTVs and BOSE Bluetooth speakers, along with destination-worthy dining on site like the Peruvian-Japanese restaurant Ruka and craft coffee shop George Howell Coffee. Plus, you can’t get more central, within walking distance to Boston Common, Fort Point, and a block from T trains to get you everywhere else.

The best Boston skyline views can be found just across the river at this luxury property in Cambridge that puts you in arm’s reach of the campuses at Harvard Square and MIT. Kimpton properties have a solid reputation for service and perks, so expect extras like a complimentary happy hour every afternoon at 5 p.m. and free kayak, paddleboards and bike rentals for exploring the city by Charles River or Left Bank.

While many chefs scramble to open new restaurants in order to stay relevant, Barbara Lynch doesn’t need a new brick-and-mortar restaurant to consistently surprise diners. Now approaching its ten-year anniversary, Lynch was long ahead of the curve with this reinterpreted diner atmosphere serving up insanely beautiful regional Italian interpretations. Score the best deal at lunch with a weekday three-course prix-fixe menu for only $37.

Even in a sprawling industrial warehouse, you’re still likely to have a wait for this constantly packed seafood spot. It’s a testament to the longevity of this inventive oyster bar that’s been going strong for nearly four years that has its own namesake Duxbury bivalve on the menu alongside its sister spot, Island Creek Oysters. Don’t miss the grilled salmon collar, along with pretty much anything your server will recommend on the rotating menu, including a round of curated craft beers for good measure.

Historic restaurants are usually a tourist trap—and this one certainly does bring in the tourists—but Union Oyster House is downright iconic as America’s oldest restaurant dating back to 1826. Along with solid oysters, chowder, and a booth dedicated to the face of Massachusetts, former president John F. Kennedy, the servers usually lay on a super thick Southie accent. I’m not sure whether it’s genuine or not, but honestly I don’t really care because it’s charming as hell.

Another destination contributing to the improving downtown scene is this cocktail hotspot, an ornate library bar churning out insane cocktails with stunning presentation. The whole “enter down an alley and through a fake beauty salon façade” speakeasy deal is a little tired shtick, but after a couple of over-the-top cocktails you’ll probably be too lit to feel any animosity about it.

We're excited to welcome a brand new Citra Dry Hopped version of Trillium New England Wild Ale into our lineup! The Citra dry hop enhances a bright lemony citrus aroma with herbacious, floral notes of lemongrass. Crisp, refreshing flavors of lime rickey, and white wine on the palate. Well balanced with moderate acidity and a medium body. Available at both breweries on TUESDAY (1/2). 6 bottle limit per person, $12.05 per bottle.

Trillium is the big name is craft beer right now not just in Boston, but even whispered about behind the bar in Brooklyn. Go straight to the source at their brewery in Fort Point to stock up on beer and swag to bring home, then hit their garden bar to work your way through their draft list.

Mention Trina’s Starlite Lounge and watch any local’s face immediately light up. It’s tough not to like this divey, kitschy retro lounge that serves up surprisingly inventive cocktails and fusion dishes until 2 a.m. on weekends in a completely unpretentious space.