Just North of the Border, a Delicious Québec Road Trip

On that six-day trip, I ate as much local cheese, maple syrup, duck, honey and ice cream as possible. 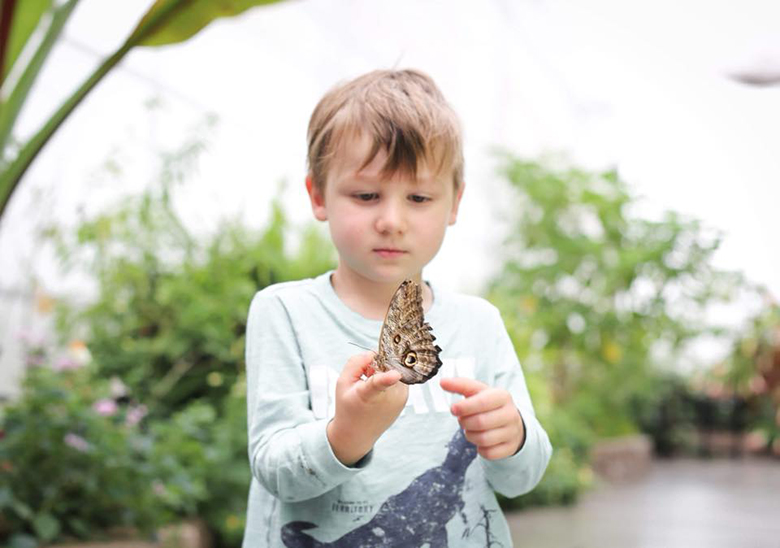 Each fall, Ferme Guyon releases its collection of hundreds of butterflies so they can migrate to warmer climes. Photo credit: Facebook/Ferme Guyon

As a privileged New England kid, I drove through southern Québec twice on my way to Montreal—once on a bus departing from a summer camp in Maine and once in a car with my nuclear family, skirting across the border from Vermont. But both times, we were either uninterested in stopping or oblivious to all that passed by outside our windows.

Plenty of New Yorkers have had a similar experience, taking advantage of cheap airfare and the short distance to Montreal from LaGuardia or JFK yet failing to see anything much beyond the city center. This fall, I learned why sticking to the city limits is a big mistake.

When a PR agency invited a writer from Edible Manhattan on a press trip facilitated by Québec tourism boards, I jumped at the opportunity. First, it’s a free trip, and I’d never been asked before. Second, I wanted to know what I’d been missing as a child, when we sped through the countryside as if it held no allure of its own.

On that six-day trip, I ate as much local cheese, maple syrup, duck, honey and ice cream as possible. Here, I trimmed the fat and pulled out the highlights, with an eye toward local food and culture. Of course outdoor activities vary according to season, and with some additional research, I assembled this three-and-a-half-hour road trip, beginning at the Montreal airport and headed southeast, just a few klicks above the American border. The range of experiences encapsulated here will give you a strong sense of what you’ve been missing, though it’s also worth striking out on your own for a day hike, serene bike ride or small-town excursion in Francophone—and English—southern Québec. 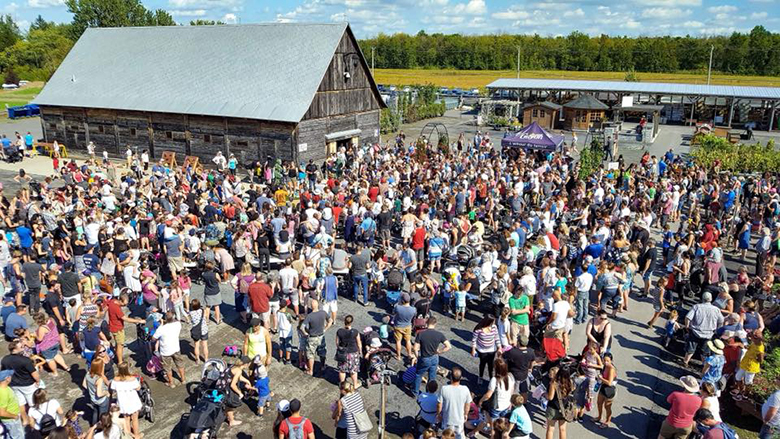 Just 30 minutes from Montreal’s airport stands Ferme Guyon. The massive agricultural and horticultural complex is sort of like an indoor farmers market, with a seemingly endless array of local food products, including seasonal crops and packaged items. Each fall, Ferme Guyon releases its collection of hundreds of butterflies so they can migrate to warmer climes, but visitors can still check out on-site honey production or take a class in butter- or bread-making. There’s also a small farm component where visitors can feed adorably fluffy alpacas. If you want to taste southern Québec, this is a must-visit locale.

Extend your visit by walking the Chambly Canal, visiting the nearby Fort Chambly National Historic Site, or heading just south to the small city of Saint-Jean-sur-Richelieu. 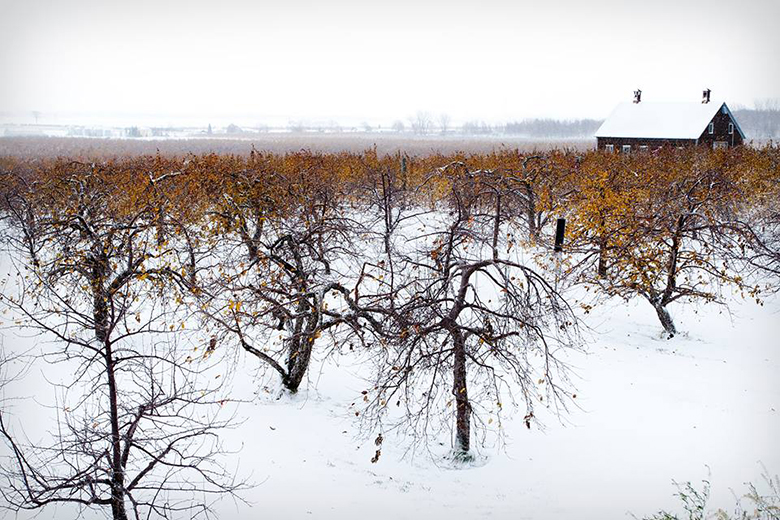 Québec is known for its love of hard cider, and there are plenty of local purveyors. In the immediate vicinity, find Cidrerie Cryo, Cidrerie McKeown and Cidrerie Verger Léo Boutin, among others. We stopped at Michel Jodoin, where they grow 20 different varieties of apples and press them into a wide array of products, from the dessert-wine-adjacent “ice cider” to an apple brandy. Daily tours are a mere $5 and include tastings.

Relax in Rougemont by stopping at Le Fruit Defendu, a small, picturesque French restaurant in the middle of cornfields. It’s a great lunch destination or romantic dinner getaway just six minutes from the cidery, and it offers several rooms if you want to spend the evening.

Just under an hour east, break up your drive by stopping in the quaint town of Knowlton for a respite alongside the Brome Lake. While much of southern Québec boasts French roots, Knowlton is among the towns founded by British loyalists. To fully grasp Québec’s borderlands, spend a little time walking around Knowlton, stopping into its bookstore (with a surprisingly big food section) and at least one of the French bistros. We popped into Le Ralais, a terraced bistro in the heart of the small town. I can’t stop thinking about the flatbread I ate there with duck—a prominent regional product—fig, and bleu cheese.

There are plenty of scenic places to stay nearby, including lakeside, or even upstairs from Le Ralais. We stayed a little farther away at Auberge West Brome, which served the best dinner of the entire trip. There, Chef Ugo-Vincent Mariotti pulls many of his ingredients from the bistro’s organic vegetable and herb garden. 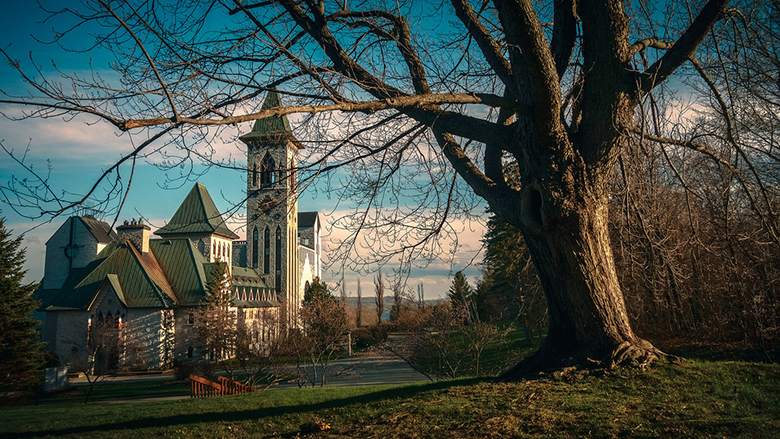 The stately, historic grounds of Saint Benedict Abbey are undeniably beautiful, and the monks here make some pretty incredible cheese, applesauce and even hard cider of their own. Photo credit: Flickr/Chris (archi3d)

The Benedictine abbey may be a well-known tourist site, but with good reason. The stately, historic grounds alongside the gleaming Lake Memphremagog are undeniably beautiful thanks to the architecture and remote setting. Black robed monks and the Gregorian chants emanating from the abbey’s sanctuary are somewhat mesmerizing, even for the atheists among us. Think reclaimed Downton Abbey set, complete with an apple orchard and revered cheesemaking operation. That’s right—these monks make some pretty incredible cheese, applesauce and even hard cider of their own. Find it all for sale in the abbey’s large basement store.

The monks don’t raise their own cows, but their award-winning cheese is a must; try the nutty Frère Jacques or the cheese curds.

Saving your abbey haul for later and still need a bite? Stop at Les Trois Graces, a modest-yet-impressive French bistro 18 minutes from the abbey. Try the club sandwich with duck confit—as good or better than what you’d find in New York—alongside one of the remarkable local beers on the menu. The bistro is one of the regions “cafés de village,” or village cafés in the heart of small towns across Québec’s Eastern Townships. Described as de facto welcoming committees, spots like Les Trois proudly rely on local ingredients when possible, showcase Québécois heritage, and act as mom-and-pop gatekeepers who will happily point you toward nearby attractions.

Enjoy the outdoors just steps away at Parc National du Mont Orford in Magog. Where you’ll find a bevy of available activities.

We whisked through Sherbrooke, a city popular with college kids and skiing tourists alike, but I wish we’d lingered. Break up your trip by staying at the newly renovated and towering Grand Times Hotel and take advantage of some of the art museums, riverfront views and diverse culinary options. After several days in the countryside, I felt ready for an urban respite, but it’s also worth a stop to put the region in perspective. Getting to know the “heart” of the region—where French and English traditions blend—will equip you with a greater appreciation of all that surrounds it, and also put you closer to Coaticook.

Rent a canoe or kayak while you’re there and explore the two adjacent rivers.

Not letting go of summer 🍦🍦

About 30 minutes south of Sherbrooke lies the town of Coaticook, an ideal place to spend half a day. Start with some outdoors time in the magnificent Parc de la Gorge, walking across a suspended footbridge and taking in the view. Head down the hill to Microbrassarie Coaticook, a quintessential restaurant and brewery making fantastic beer. Best of all, eating and drinking here positions you to walk across the street to the Laiterie de Coaticook, where you’ll eat some of the best ice cream of your life. Coaticook sits in the middle of Québec’s “dairy basin,” where more than 300 farms focus on dairy production. Since 1942, the Laiterie has been turning that local milk into some of the finest ice cream around.

Until early fall, the gorge is lit up at night and transformed into Foresta Lumina, a magical multimedia art installation that takes about an hour to experience and that’s ideal for families or couples. The adjacent restaurant serves multiple kinds of poutine, among other things.