PHOTOS: Eating the Rainbow With Sweetgreen and Edible Schoolyard NYC

Atara Bernstein holds a small, red jewel of a minced vegetable in her outstretched hand. “Ok, friends—who can name this one?”Bernstein’s new “friends” are a class of 23 fourth graders from P.S./M.S. 7. The students came by subway from East Harlem to NoMad on this damp and chilly January morning to participate in a workshop on healthy eating at Sweetgreen, a farm-to-table salad chain.

She’s already shown them a multi-hued array of fruits and vegetables from the restaurant’s salad bar, describing each plant’s nutritional attributes to the class. So far they have identified corn, spinach, cucumber and carrots. They identify a blackberry, too, after several guesses, but this object in her palm has them squinting, stumped. Those in the first few rows of bleachers crane forward in their seats; those in the back stand and clamber toward her to get a better look.

Bernstein, a food educator for Sweetgreen, is young and poised, with a hoop in her nose and long hair flowing from beneath a heathered beanie. In the best possible way, she looks like a cool babysitter, and her warm energy makes the kids feel cool, too.

“Any guesses?” she prompts the class again. “It’s a vegetable that’s round and grows underground.” Hands raise tentatively, politely — these kids want to impress. “Um, a radish?” ventures one student.

“That’s a good guess!” she exclaims. “A radish is also a red root vegetable. But this is a beet.” She explains that beets are special because they have high vitamin C content to help heal the cuts they get on the playground.

Today’s lesson, called “Eat the Rainbow,” is the first of several field trips that P.S./M.S. 7 fourth graders will take to Sweetgreen. This introductory workshop is all about reminding these kids that they already know this stuff — that they have the power to become what Sweetgreen calls “Defenders of Wellness.” 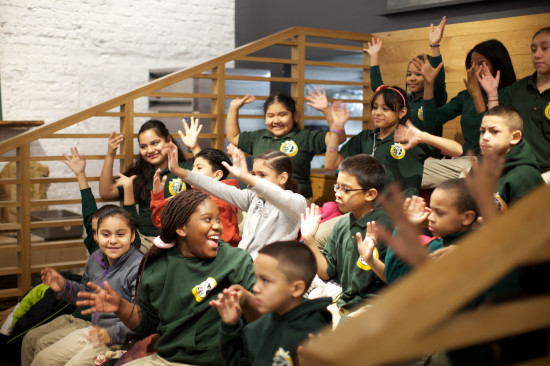 Powerful advocates for healthy living are needed at their school, where about 20 percent of families are homeless and obesity is at an all-time high. But luckily for Bernstein, this class already has a solid interest in seed-to-table eating, thanks to Edible Schoolyard NYC (ESYNYC). One of the six founding affiliates of chef Alice Waters’ original Edible Schoolyard Project, ESYNYC has a burgeoning farm and kitchen at P.S./M.S. 7.

The workshop also marks the kick-off of an exciting partnership between Sweetgreen and ESYNYC.

Washington DC based Sweetgreen launched Sweetgreen in Schools to focus its philanthropic efforts on nutrition education for school children. Since opening its first New York location last fall, the chain has wasted no time in adapting this programming for Manhattan — which explains the wooden bleachers built into the NoMad restaurant.

Sweetgreen has found a like-minded collaborator in ESYNYC, which builds organic gardens and kitchen classrooms at public schools in disadvantaged areas of the city. “We are absolutely thrilled to partner with Edible Schoolyard NYC, an organization we have long admired for its outstanding work in teaching children in low-income areas to love healthy food,” says Laura Rankin, director of Sweetgreen in Schools. 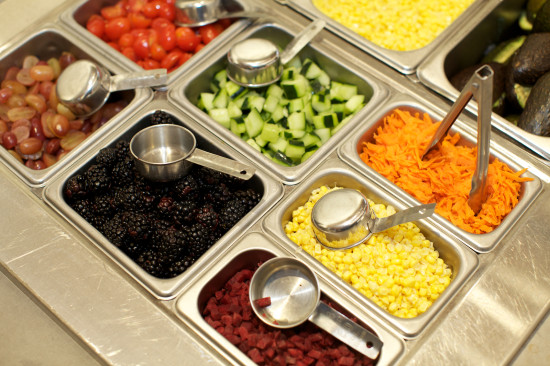 The original Edible Schoolyard Project began in Berkeley, California in 1998, where it still thrives. This “Delicious Revolution” caught hold, spawning sister programs across the U.S., including ESYNYC, which has been building organic four-season gardens and kitchen classrooms at public schools in disadvantaged areas of the city since 2010.

ESYNYC provides family and community programming and training for teachers and principals throughout New York City, but its backbone is in-school education. According to a February, 2013 post on the program’s website, somewhere between 500 and 1,000 pre-K to elementary-school aged children in Manhattan and Brooklyn are learning to grow, eat and love healthy food right in their own school. Through experiential and interdisciplinary garden and kitchen classes, kids have a chance to plant and care for a seed of their choice in the garden, which is often something they haven’t heard of before like mizuna or freckle leaf lettuce

In the kitchen, younger kids may learn to and use a mortar and pestle to mash ingredients like garlic and squash, for example, while older kids might be tasked with creating their own salad dressing from a variety of acids, oils and herbs. In addition to P.S./M.S. 7, there is a program at P.S. 216 in Gravesend, Brooklyn, and ESYNYC has long-term plans to expand to all five boroughs.

Sweetgreen hopes to send educators into schools in the near future, but for this semester, P.S./M.S. 7 fourth graders will make several visits to the restaurant for workshops like the one led by Bernstein. After their talk about the benefits of beets, she introduces the class to the Aggregate Nutrient Density Index (ANDI) score chart. Working in pairs, the kids must use the chart and their math skills to plan salads with four ingredients that add up to at least 200 ANDI points.

At the end of the math activity, Bernstein summons their attention by blowing into a harmonica — “Friends!” — and instructs the students to queue up at the salad bar. As they wait their turn, they compare ANDI scores. “Miss Atara! Miss Atara! Guess what?” calls one girl, beaming. “Mine added up to 405! And my partner’s added up to 430!” 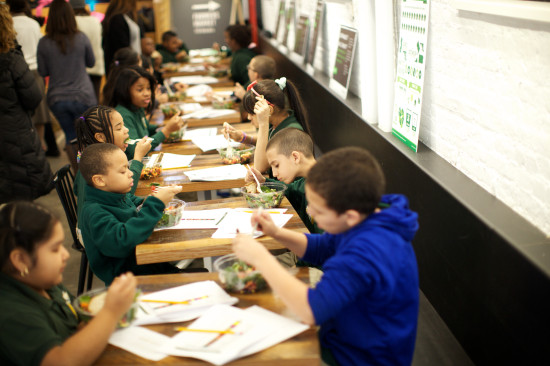 Bernstein summarizes a common reaction: “Miss Atara, I don’t like salad, but I like this!” To which she replies, “This is salad!”

Topics for future Sweetgreen workshops include sustainability, fitness and helping the community — all themes that fit perfectly into the ESYNYC curriculum. P.S./M.S. 7 soon will break ground on a rooftop garden and greenhouse, a dramatic expansion over their current raised bed planters. This means that in a few years, when Bernstein asks ESYNYC students to identify a beet, every kid will know what she’s talking about.

Sweetgreen will open in Williamsburg this summer.