It includes a house-made cashew cheese. 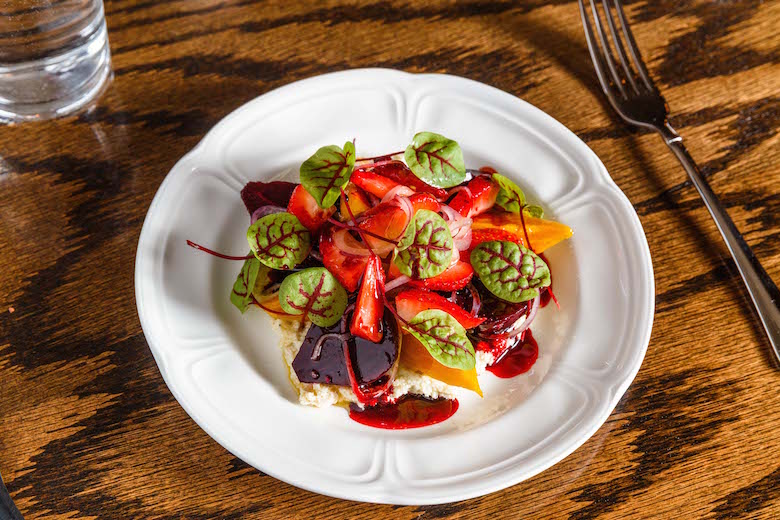 Much of chef and restaurateur Robert Marchetti’s Italian family is vegan by circumstance. “Believe it or not, the majority of Italians in my family are mostly vegetarian by the way they eat, not choice, and vegan by pure default,” he says. “They love in season vegetables.”

This style of eating has influenced him to put vegan dishes on the menu at Nolita restaurant Gran Tivoli, which he opened earlier this year. The latest is a salt-baked beet salad, which includes a housemade cashew cheese, sorrel and pickled sour strawberries.

Cashew cheese has begun appearing on more menus for omnivorous restaurants lately, and here, their process for making it is simple. “We soak organic cashews in purified water for two days,” says Marchetti. “Then drain the cashews and finally puree the nuts with a little fresh purified water and add olive oil and salt.”

As for the beets, they also have an Italian spin. “The Italian rock salt we use is packed with minerals that removed the water content and concentrates the flavor,” he says. “It also creates a much more stable beet for cutting.”

Beyond the cheese and beets, which are the dish’s rich base, the sorrel adds some citrus notes and the pickled sour strawberries provide further acid to play off the fat of the cheese and the earthy sweetness of the beets. And, of course, there’s a way to trace the inclusion of the latter back to Italy. “Ancient Romans used strawberries for medicinal purposes, but I like the sweet and sour balance they add to the beets,” says Marchetti. “The dish really has sweet, sour and salty flavors that burst.”

A thoughtful, plant-based dish that feels of a part with the full omnivorous menu? Keep ’em coming.