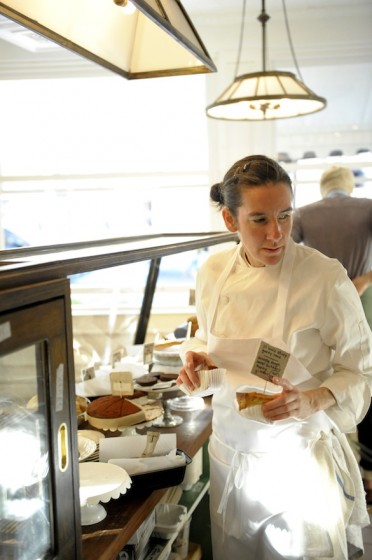 If you missed the latest episode of Edible on Let’s Eat, our NY1 segment that airs Mondays and Fridays, we beg of you to watch it online right here. Our subject is Shuna Lydon, the pastry chef at Peels on the Bowery. Peels, along with its sister restaurant Freemans, was the Back of the House profile in our last issue. But IOHO Lydon didn’t get the love she deserves in that feature — she was just nominated for a James Beard Foundation award for outstanding pastry chef, and was tapped by none other than Thomas Keller to be pastry chef at Bouchon in Napa  — and we wanted to make things right.

Lydon, an art school grad with a focus on photography who got her start on the savory side of the kitchen, has spent time on both coasts, and in fact even wrote for Edible San Francisco before she came back East. (You can read her work now on her blog, which is called Eggbeater.) Her approach to her diverse range of sweets — open nearly 24 hours a day, Peels is both an all-day bakery and a full-service restaurant — is complex, clever and delicious: scones with black pepper and chocolate; monkey bread with mascarpone icing; banana bread with candied ginger and chocolate; Sunday brunch doughnuts with a spicy-smoky “tasso” sugar coating; buttermilk chocolate cakes, ice cream sundaes with pretzel bites and squares of rich, dark chocolate brownie, butterscotch puddings with cumin-spiced nuts.

One of our favorite dishes (it’s one of everyone’s favorite dishes, we must admit) is the her Eton Mess fool, a mix of two classic British desserts. (She spent time cooking there, too.)  It’s blackberry jam — made from frozen Greenmarket berries sold over the winter — crumbles of crunchy meringue, spoonfuls of yogurt cream mousse and scoop or two of rosewater-mint ice milk. It’s salty, sweet, tangy, creamy, crunchy…. addictive but also really refreshing, and because of that last fact, refreshingly rare.

Like any good chef, Lydon says, she pays attention to her ingredients, the seasons, what people like and what works with her menu, and also, because she’s a pastry chef, the tiny technical details of every dish, such as how overmixing the butter into the dough can make cookies spread thin instead of rise. Although unlike many pastry chefs, Lydon doesn’t just follow a recipe once she’s got it down pat: She continues to taste and test each time, approaching her cookies the same way you would if you were making roast chicken.

“Baking is a science,” she says, “you put butter and eggs together they will do this one thing, Yes. But  I think because I started off a savory chef and because I didn’t have formal training from a culinary school, a lot of my recipes are written ‘season to taste ‘the same way our chefs have the cooks season soup.”