A revered locavore chef gets fired up. 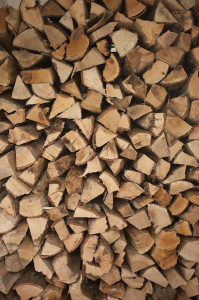 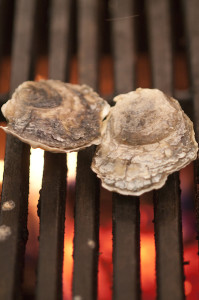 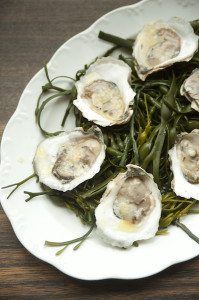 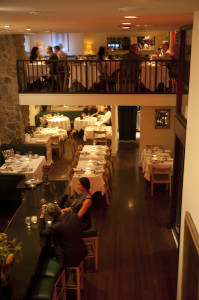 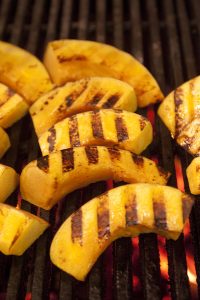 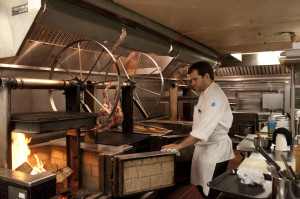 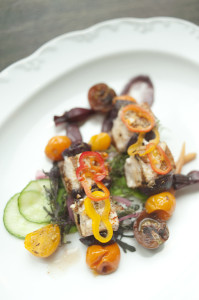 If Galen Zamarra’s first restaurant is dedicated to beautifully composed plates that capture the flavors of our foodshed—he named it Mas, an old French term for a farmhouse estate that’s deliciously self-sufficient—then his second is all about the wonders of the woodshed.

Mas (la grillade) might not be the only place in Manhattan that keeps a stack of firewood, but it’s the only one that uses it as the primary source of fuel. Save a few saucepots simmering on tiny induction burners, all the real cooking at Mas (la grillade) happens at a wall of four massive, custom-made, wood-fired grills, which go through a cord a week of cured local cherry, apple, maple and oak, stored in an erstwhile newsstand next door.

Those gorgeous grills are among the rare imports that appear in the kitchen of a chef who has proved to be not just one of the most technically skilled at cooking breathtakingly elegant, seasonally sourced food—he cheffed at Michelin three-star spots in France and was chef de cuisine at Bouley Bakery, where he scored a James Beard rising star chef award in 2001—but one of the most deeply committed to local ingredients. This is a guy who takes Battenkill River canoe trips with his pork farmers, and works a smear of pureed huitlacoche—aka the delicacy also known as corn smut—under a few slivers of smoke-roasted chicken and tubby little trumpet mushrooms not because of some trip to Mexico, but because one of his regular upstate farmers needed someone to buy it.

Those ingredients were the driving force behind the grills themselves. Zamarra arrived at the wood fire—“grillade” is French for “grilled”—not because of testosterone or trends, but because it’s a slow, beautiful, age-old way to cook.

“How can I evolve this focus on ingredients?” Zamarra recalls thinking to himself a few years back, when he was pondering Mas’s sequel, a mere two blocks from the original. “How can I make ingredients stand out more?”

From Zamarra’s point of view, smoke is a magic ingredient. It highlights, reveals, enhances, intensifies. La grillade doesn’t do barbecue, then, but the kind of beautifully charred fare you’d envision heaped on some bucolic farmhouse table in southern France, a century before anyone was cooking with gas.

In 21st-century Manhattan, Zamarra’s chefs use their grills’ giant metal crank wheels to raise and lower the grates directly over sputtering, fluttering fires, controlling heat and char. Oysters are poached in the shell, bathed with thyme-shallot butter, and come off the grill swimming in the gentle scent of smoke. Whole heads of garlic are pit-roasted right on the fire, then pounded into olive oil and crushed dried black olives, served with little triangles of flame-licked toast. In the afternoon, leg of lamb is spit-roasted, then, during dinner, each order is grilled, sliced, splashed with jus and served with smoky potatoes and a sweet pile of blackened green Sucrine lettuce.

Seafood is also baptized in flame, to sublime effect. A whole dorade is rubbed with salt and a flurry of green herbs and almost comically charred, its crackly skin deeply scored by the grates of the grill and so crispy it appears dusted with silver flake. When plated, the creature is crowned with a yellow half sun of lemon grilled so slowly and gently, the juice in each little section is reduced to caramelized citrus perfection.

Zamarra became famous for the complexity on his plates at Mas, but here the fare feels more rustic. Ingredients are sometimes served whole—a grilled chanterelle, say, or fat smoked fingerlings—and instead of all his superlative sauces, he opts for condiments like complexly layered housemade pickles, mustards and aiolis. A swirl of beet mustard, for example—it provides a smooth, pink heat—is the link between a few slices of pheasant breast and leg grilled together wrapped in caul fat, grilled wedges of mustard-yellow Asian pear and sweet baby turnips with a bit of their green tops intact, and a spray of succulent hen of the woods mushrooms so meaty, you’d swear they were made of lamb.

Over wood coals that began the afternoon as whole logs, chefs might also pop popcorn on the grate with a big colander, topping it with fried herbs and Parmesan cheese to serve as bar snacks. The pastry chef gives every dessert a kiss of the fire, too: A double-chocolate tart is set over a curlicue of crème fraîche and honey, topped with toasted smoked almonds, smoked almond brittle and grilled figs and served with a scoop of unforgettable stout ice cream. A goat-cheese cheesecake is gilded with grilled pears.

Just as at Mas, Zamarra or his sous-chefs plate every dish from a white-tablecloth-covered expediting station in the middle of the kitchen. Yet here there is much more to this middle: While his other kitchen is a 240-square-foot shoebox, this one is over six times that size—to serve just 10 more seats. Then again, each of the four refrigerator-size grills, all shipped up from J&R Manufacturing in Mesquite, Texas, is a space hog.

“This thing is a tank,” laughs Zamarra, proudly slapping the flank of one of his special edition “Woodshow Broilers” as if he were a Southern pit-master, rather than a Michelin-starred Manhattan chef cooking refined fare in a restaurant with a French name. He stores leftover coals in a covered trash can, whose low-oxygen environment quickly turns those into even slower-burning briquettes. (That’s next to the forlorn, four-burner range called on for little more than simmering a lonely pot of stock.)

And, despite a city-required Smog Hog on the roof, passersby on crisp evenings still get a whiff of the flickering fires, every bit as beckoning as the floor-to-ceiling windows’ golden light. Standing there at Seventh Avenue South and Bedford Street as cabs rattle by and truck horns blare, the ancient, sylvan scent of wood smoke is unmistakable.