How a Chef From L.A. Is Bringing Mexican Flavor to European Cuisine in the West Village

“All my salsas are my dad’s, but with a little twist—an extra ingredient he would never include, like anchovies.” 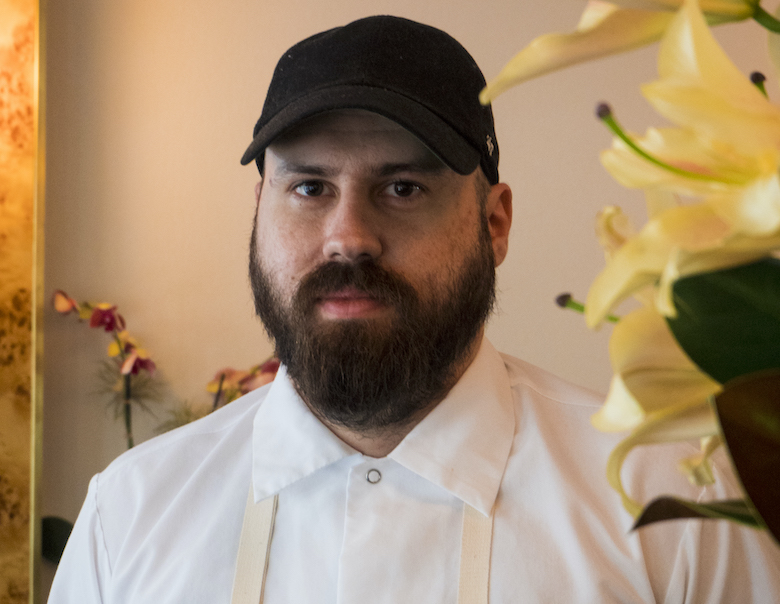 L.A. native Efrén Hernández is the chef at Mimi and sister restaurant Babs, both located in the West Village. These restaurants are looking toward the future of European cuisine, with nods to the influence and impact made by the endlessly interconnected world we find ourselves in. You can see this outlook reflected through pairings like the sea trout with fermented turnips and kombu at Mimi, or the divorced eggs at Babs, a nod to Mexican huevos divorciados with the decidedly European substitution of romesco and pistou in place of salsa roja and verde, respectively.

We spoke about the importance of ever-evolving, collaboratively built menus, opening a restaurant for the first time, and all the pressures and implications that go along with being a second-generation Mexican immigrant working in kitchens.

Heather Clark: How did you get started working in kitchens? I know when we first met you were making films…
Efrén Hernández: One of my first service jobs while I was in art school was at Nitehawk in Brooklyn. I thought it was perfect, because it was movies and food. And it was! It was great for a long time, but I wasn’t that good with guests. One night a drunk woman grabbed my arm, so I told her not to touch me. She complained to my manager and after I explained the situation, they offered me a kitchen job. I liked it there a lot. The chef was great, and he let me work the line with no experience. It’s funny how one little moment can change things.

H.C.: Did you work in restaurants when you were living in L.A.?
E.H.: No, never. I actually worked at a hotel in high school, first as a groundskeeper and then in maintenance. I did easy stuff, putting up signs, painting fences. I really hated working, I would be like “Why do I have to work? All my friends are out having fun!” My dad told me I needed to learn what work was. Now I love it, when you’re doing something you want to do well it’s easier to enjoy.

H.C.: Did you cook with your parents growing up?
E.H.: My mom didn’t really let us, we got in the way. [Laughs.] But I always loved food, we ate all kinds of stuff, every part of the animal. When my dad first came to this country he was a line cook, it’s the first job for a lot of Mexican immigrants. He did that for a long time and became a really good cook. He made amazing burgers… and sushi!

H.C.: Do you feel your parents’ influence reflected in the menus you create?
E.H.: Yeah, definitely. All my salsas are my dad’s, but with a little twist—an extra ingredient he would never include, like anchovies. My dad would be like “What are you doing? Fish in salsa?” When I started thinking seriously about becoming a chef, I called my mom to tell her. She started crying and said, “I remember how much your dad hated it, why would you choose this job he had to do?” Now she’s okay, but she definitely had a moment of panic like, “We came to this country so you could do better.” I spoke to my dad about it; his last job was at this really busy taco place by the airport. One day he was in the back alone, his manager was screaming at him, and I guess he just snapped. He grabbed all the tickets, lit them on fire, and walked out. He’s never worked in a professional kitchen since.

H.C.: Wow that’s incredible, what a great exit! So how did you go from working the line at Nitehawk with no experience to being the chef at two restaurants?
E.H.: Before Mimi, I was at Faro, and then I took a month off to write. When that project finished my wife, Rebecca, was like, “You have to get a job. I don’t care what it is.” At the same time, the chef at Mimi just wasn’t working out, so the owners asked me to come help. I started changing stuff, doing different jobs, eventually they had me take over. It wasn’t exactly a fun situation; I didn’t want anyone to get fired, but… it’s been around three years now. Babs opened about four months ago; I got to help create it.

H.C.: What was it like to be a part of that for the first time?
E.H.: It was fun, but really hard! Especially with things you can’t control. We couldn’t get the gas on, had to wait for construction, nothing goes to plan, but it was amazing to be involved. The owners had an idea of what they wanted, the food, the ambiance, and I got to work within those parameters. The food ended up going in a slightly different direction, but close enough. I’d say Babs is a European grill, with strong Basque influences. Basque cooking is really rooted in the grill, so there’s a lot of that, but then we have dishes which are more Italian, French, Mexican. The food is all over the place. And Mimi is French in a Parisian way. Like, “Yeah, we’re French, but Parisians are from everywhere.” French, but also a little Japanese, a little Mexican, it’s more subtle.

H.C.: Do you approach writing both menus the same way, or is there a different process involved at each location?
E.H.: Well, Mimi is a little heavier, more butter, French sauces, while Babs feels fresher and brighter. Both menus change a lot, I like that, we get to do new things, try new things. Mimi’s menu is totally different month to month, and we reprint menus once a week. It used to be almost daily, but that was getting out of hand. Normally one or two things change, so by the end of the month the menu is mostly new. We try to cook seasonally at both locations, Mimi is a little more… “Something went out of season this week, we need to change it!” Where Babs is a little less hyper-seasonal. And I like to have a good, collaborative environment. At Mimi I have Nathan, the Chef de Cuisine, but I like when everyone gives input. I’m not the kind of person who’s like “No one has good ideas but me!” I know other people have good ideas, there’s no reason not to listen to them. The best dishes have everyone involved; you end up with something one person would never come up with.

H.C.: Do you have a pastry chef or bakery you work with? I remember when I ate at Mimi I wouldn’t stop talking about how good the bread is.
E.H.: Oh, thanks! No, we make everything in house, I think it’s important to do. We bake our own breads from a recipe I developed by tweaking a few others I knew. They each have slightly different styles, Babs has boules and at Mimi we make one really big loaf that ferments longer. It’s cool to make, and it’s only served here; you can’t get it anywhere else.