Seamore’s and Yuji Ramen have teamed up to promote eating the invasive shellfish. 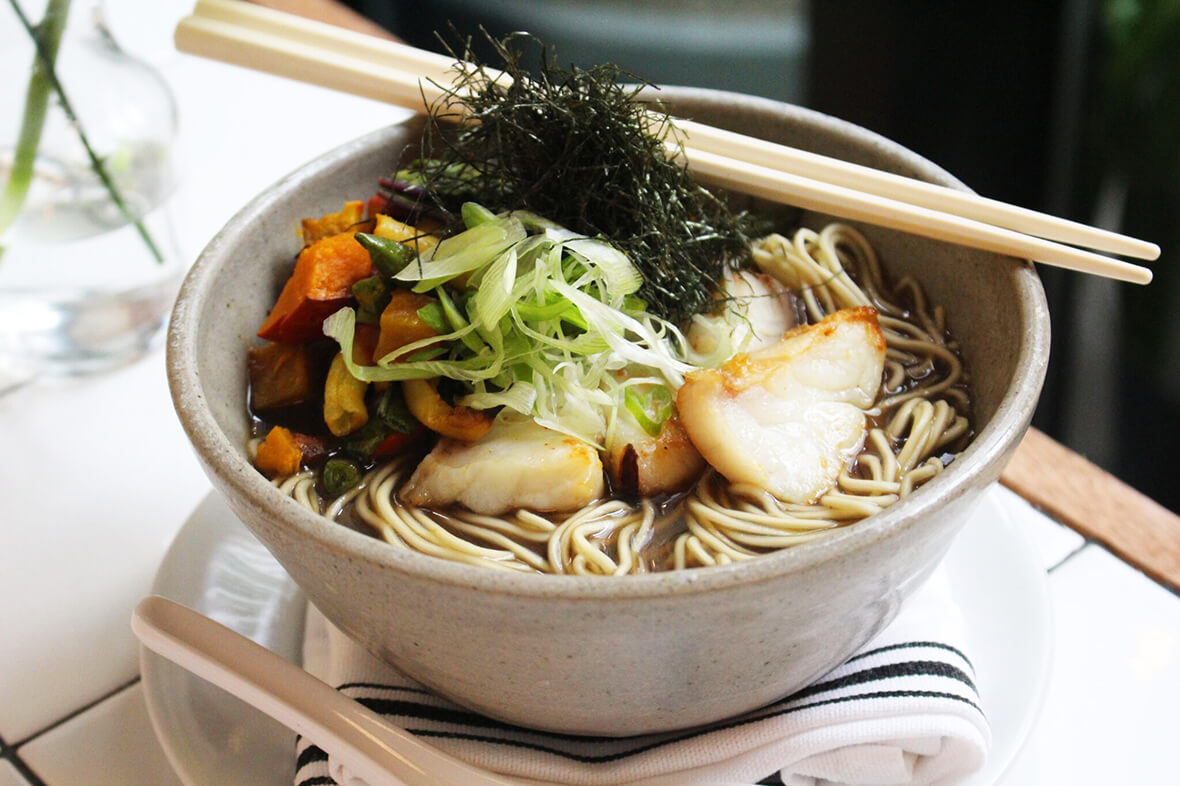 Editor’s note: We’re chronicling how tech is changing the way we eat and drink as we lead up to this fall’s Food Loves Tech. Our annual deep dive into appropriate food and ag technologies returns to Industry City on November 2–3, 2018—stay tuned for updates and use the code FLT30 to get 30% off tickets at checkout.

Osakana chef Daniel Lee and Seamore’s chef Chris Cryer collaborated to create a Green Crab Miso Ramen that will be on the menu at Seamore’s locations throughout the month. Special collaborative Omakase dinners at Seamore’s Brookfield Place on November 7 and 8 will also feature a green crab dashi.

To be clear, green crabs aren’t good for the environment; they’re threatening local ecosystems. While they’ve been living in New England waters for more than 100 years, the population has spiked in recent years due to warming water temperatures (and as they’re invasive, they have no natural predators). The crabs have been affecting Maine’s mussel and soft-shell clam populations and destroying coastal habitats.

Eating them, then, is a good way to get rid of them, and many people are working on creating markets so that fishermen will be encouraged to catch them. In the past few months, New England nonprofit Manomet held a Green Crab Working Summit and received a grant from the National Oceanic and Atmospheric Administration to expand the fishery.

Greenpoint Fish & Lobster Co. co-owner Vinny Milburn said he has been selling green crabs whenever possible and has been looking for ways to give fishermen an economic incentive to get more of them out of the ocean. “They’re a nuisance, but the fisherman don’t get paid to fish them,” he explained. “It’s not usually worth it to haul them in … and I’ve been looking for people to pay more.”

Given their focus on sourcing sustainable, local seafood, Seamore’s and Yuji Ramen jumped at the chance to see what they could do with green crabs, and they agreed to buy a large batch from Milburn that came from an oyster farmer in Duxbury, Massachusetts. “He just has this float out in the harbor and sets these traps with a little bait, and then the crabs crawl in.” Milburn said.

The trouble, both Lee and Cryer said, is that unlike a Chesapeake blue crab, for example, green crabs have very little meat. So little that it’s barely worth the time it takes to pull it out of the shell. However, they make a great broth; hence, the ramen.

“They’re quite salty compared to other crabs,” Cryer said. “When I was roasting them … and I took them out of the oven, it was a more briny smell.”

“The flavor [of the broth] is salty and sweet,” Lee agreed. That flavor is complemented with leeks, ginger, chile paste, soy, garlic, shallots, yuzu juice and sesame in the Green Crab Miso Ramen. The dish also includes roasted monkfish, another sustainable seafood option.

While the collaborative menu is only running for a month, the chefs are hoping the project will draw more attention to green crabs’ eco-culinary potential.

“It’s a great time because ramen culture is bigger than ever, and it’s getting cold outside,” Lee said. “We should get the word out about this.”