Like soup from a stone, each of those neighborhood flavors goes into the pot and the result is greater than the sum of its parts. 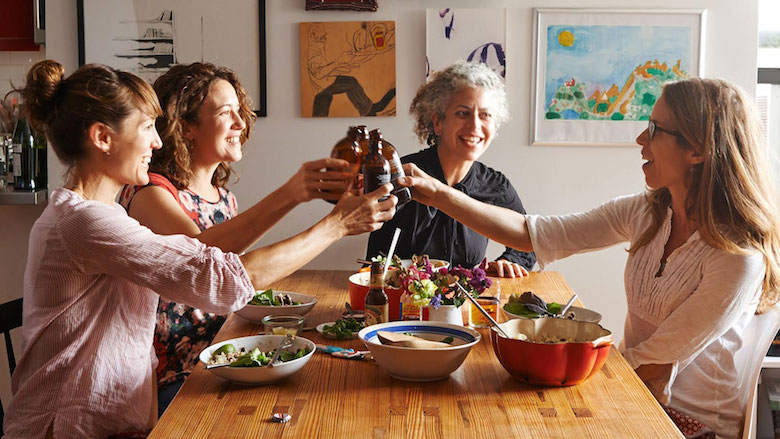 No, not this slushy city’s collective unconscious. I mean the Soup Club, founded by four women on the Lower East Side, which has since spawned a cookbook and, to some extent, a soup-sharing phenomenon.

It began when the four, each raising kids in the Seward Park co-op buildings, became friends in the neighborhood’s common spaces and, at playgrounds and picnics, said things like, “Oh, I have extra granola” or “Want some of my lasagna?” Then one day Tina sent out an e-mail proposing they start a group and formalize food-sharing. Courtney got it at work and quickly replied — “Sure!” The soup club was born. 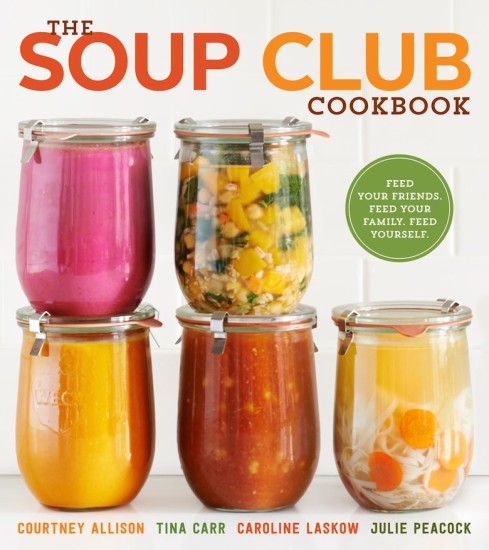 Once a week, on Wednesday, one of them makes a big pot of soup, enough for each member to get two quarts. Each of the four members cooks one Wednesday a month, stirring pots that star scores from their beloved Grand Street CSA as well as the cream of the crop from nearby Saxelby Cheese, the Union Square Greenmarket and SOS Chef. Soups are seasoned with spices from Dual Spice Shop on 2nd Avenue (especially the Indian chilies, cumin, cinnamon, turmeric) and the Chinatown markets along Grand and East Broadway. Courtney raves about the latter’s fresh ginger, lychees, tofu, coconut milk, bean pastes, chili sauces and those Calbee Snap Peas, aka “Crack Peas,” that instantly turn broth into soup.

And like soup from a stone, each of those neighborhood flavors goes into the pot and the result is greater than the sum of its parts. “New York’s diversity and density always inspires,” Courtney says. “We live in big buildings, surrounded by other big buildings, and through our elevator rides, walks to work, school pickup and everyday city life have a multitude of interactions all day with people who are from different places, eating different things…. You can’t help but take an interest in, for example, your Bulgarian friend who insists his country’s feta is superior to all others, or the Argentinean chef who shares a classic bread and fish soup with you when she hears you have a Soup Club. … Stories like these keep us inspired and trying new things.”

Over the months, they perfected soup-club practices like how to adjust spices for big batches and the best ways to store and deliver soup. (They use Weck jars, but Courtney says any wide-mouth glass jars work well; Once you’ve licked them clean, just wash the jars and hang them on the doorknob or pass off at drop-off.) And alongside the soup, they often deliver toppings, like crème fraîche, pesto, rice or homemade tortilla chips.

But their expertise shines brightest in their new books’ recipes — all of which make a generous eight quarts.

The club has already spawned spin-offs from Jersey to Nashville to Milwaukee, and the social nature is as inspiring as the soup itself.

“Having soup club anchors my week,” says Courtney. “It’s really fun and we’ve taking a lot of inspiration from each other, particular in the winter when no one sees one another quite as much. And we really stay together through food, I can whip up a big batch of chili and make a bunch of sides and give that as gift. It really has connected us and deepened our friendship. We love to share food, we think everyone should be cooking together.”

Eager to try one of their soups at home? We recommend the following from their recently released The Soup Club Cookbook:

My husband and I had dinner one night with old friends. They are fantastic home cooks, so I asked if they had made any memorable soups lately. “Yes! Senegalese Peanut Soup.” The flavors they described—peanuts, coconut, ginger, tomato, sweet potato — appealed immediately. On our rainy cab ride home, I found myself sitting in the front seat of the taxi and it turned out that the driver was Senegalese. He and I talked peanuts and cooking, and he heartily confirmed that a soup rich with peanuts and sweet potatoes is a beloved traditional meal in his country. He also explained that while raw peanuts are widely available in Senegal, store-bought roasted ones are a fine substitute here in the States. Carried forward by the serendipitous confluence of events, I made this the following week. —Tina

Note: If halving this recipe, you can still use the entire can of unsweetened coconut milk. If delivering, include one quarter of the remaining peanuts, cilantro, and ginger. Reheat the soup when served. Grate fresh ginger into the pot or directly into the soup bowl when eating. Top with more peanuts and chopped cilantro leaves.