Although no single country has a monopoly on quality, a wide variety of Northern Californian single-estate olive oils have enriched the global market over the past few years. 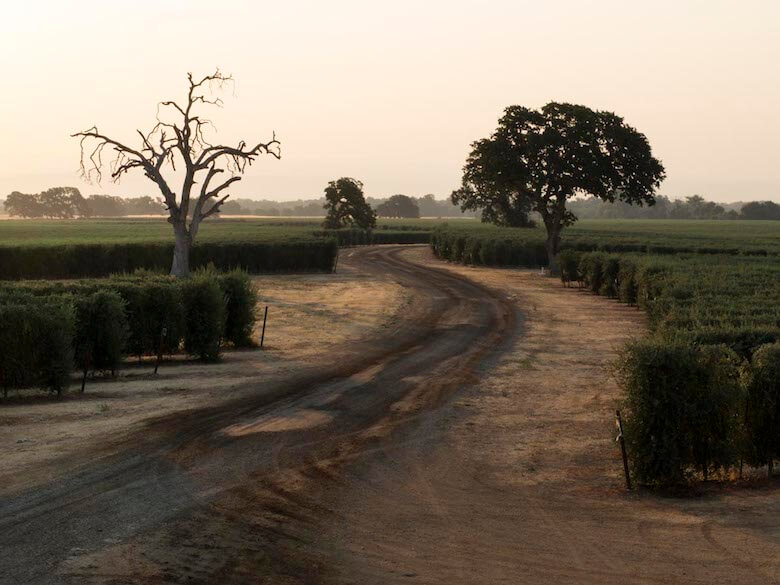 Based in Corning, Lucero prides itself on growing 17 different olive cultivars, each having its own unique flavor profile and culinary applicability.

As an oleologist, I’ve traveled the world finding, evaluating and curating extra-virgin olive oils for my company Grove and Vine. Although no single country has a monopoly on quality, a wide variety of Northern Californian single-estate olive oils have enriched the market over the past few years and many compete with award-winning European oils. The dry weather is ideal and the soil a perfect mix of fertile and poor. What’s more, Californian oil producers are not bound to rigid production laws that hamstring some of Europe’s DOP or AOC zones, which specify region and production technique. Instead they produce what they want, when they want and how they want.

California grows a plethora of European olive cultivars (also called varieties). Similar to grape vines for wine, the top producers plant the correct olive in its ideal microclimate to obtain a balanced fruit during the available growing season. In this sense, there is no “best” olive oil—the prized Tuscan Frantoio olive isn’t inherently superior to Spanish Arbequina olives. The true beauty lies in their geo-specificity. For different reasons, below are a few producers who separate and distinguish themselves:

Individual bottle prices listed below may vary depending on vendor and product.

Frantoio Grove
$23.99, one 375 mL bottle
Jeff Martin’s organic small-scale olive grove in Santa Clara County is the pinnacle of what the state offers. He planted 3,500 trees in 2005—95 percent Frantoio, 3 percent Pendolino and 2 percent Leccino—the latter used as pollinators every 20 rows. He built 12 barn owl boxes to mitigate voles, moles and gophers that bite through the cambium layer of bark and damage sap flow. Towering cypress trees dot his landscape, which shares a similar climate to Central Italy. Both have hot, dry summers with cold, brisk nights—ideal for Frantoio olives to thrive.

This early hand-harvested Frantoio is immediately milled on-site using a two-phase Pieralisi Baby (a modern centrifugal decanter). The oil has unique aromas of cinnamon, mint and freshly cut grass, and its slightly viscous texture has undertones of green grass, arugula, balanced bitterness and a persistent, elongated peppery finish. The cause of this intense peppery sensation—considered an attribute of high-quality olive oil—is oleocanthal, a natural phenolic compound that has both anti-inflammatory and antioxidant properties. This style of oil is best utilized where the intent is for the oil to cut through and brighten up the dish, pairing well with red meat, cannellini beans or a hearty soup.

California Olive Ranch
$12.59, one 500 mL bottle of “Everyday” extra-virgin olive oil
The California Olive Ranch was founded in 1998 to produce a quality extra-virgin olive oil at an affordable price point. Their “Everyday” oil is produced primarily with the famed Spanish Arbequina olive, which truly is the world’s cultivar. Due to its high oil content, consistent fruit bearing and adaptability to various agronomic conditions, Arbequina has spread throughout Spain, Chile, Argentina, California and Australia.

While it can be planted in traditional olive culture practices, it also thrives in super-high-density production. In this capacity the Arbequina is “dwarfable.” At COR, they are tightly pruned in hedgerows so the fruit bears close to the central trunk. Machines skim the top similar to the grape harvest. The result is lower labor costs with quick, efficient harvesting resulting in reduced oxidative stress to the fruit.

Many cooks prefer the Arbequina’s buttery, mellow flavor profile because it doesn’t overwhelm other ingredients in a dish. It is an excellent choice for cooking, for making basil pesto and in salad dressings.

Lucero
$27.50, one 500 mL bottle of either Coratina or Ascolano extra-virgin olive oil
Based in Corning, Lucero prides itself on growing 17 different olive cultivars, each having its own unique flavor profile and culinary applicability. Some of these olives are hand harvested, others are machine harvested, but all pass through a Spadoni filtration system imported from Umbria, Italy. This key step separates the micro and macroscopic olive particles from the oil, which extends its shelf life and prevents the organoleptic defect “muddy sediment” from forming.

The two oils that stand out are their Coratina and Ascolano. The former originates in Puglia and is known for its vibrant, bitter and assertive flavor profile, which pairs well with grilled octopus, tomato sauce, broccoli rabe and pasta courses. The Ascolano has the aroma of freshly picked ripe peaches—a rare delicacy to encounter in the world of extra-virgin olive oil that’s excellent to anoint fiore di latte gelato with a dash of sea salt.