If Amazon can cause this much uncertainty in brick-and-mortar grocery shopping, their online-only reach really knows no bounds. 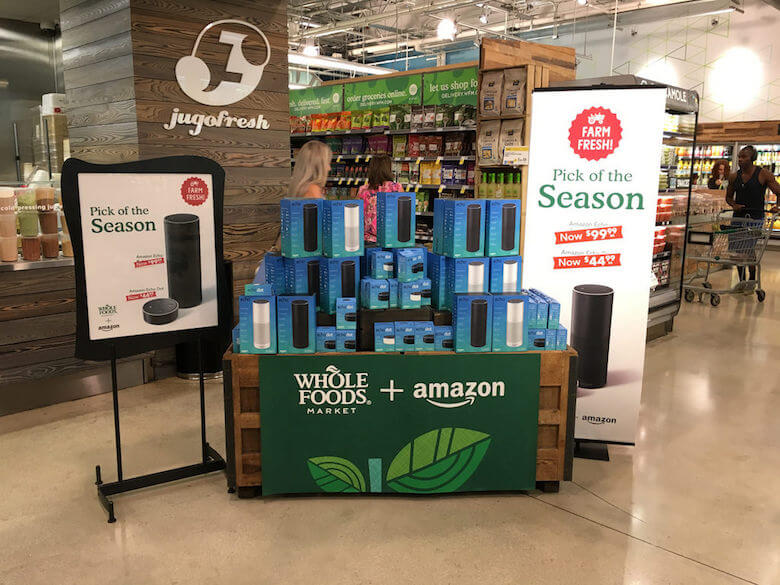 Editor’s note: We kicked off our first annual Food Loves Tech event last summer in Chelsea—here’s a recap. We’re bringing a taste of the food and farming future back this weekend, but just across the East River at Industry City. This story is part of an ongoing series about technology’s effects on our food supply.

In 1930, King Kullen forever changed how we grocery shop when they opened the doors of their one-stop-shop supermarkets, providing luxuries like shopping carts and non-food items. Years later, supermarket chain Stop & Shop introduced Peapod, a first-of-its-kind grocery delivery program, followed by FreshDirect, whose empty boxes lined city streets on trash days, and UberEats, which allows you to skip the scandal of fast-food dining by the rideshare drivers delivering McDonald’s to your door. Now Amazon is joining the ranks of grocery and food delivery by acquiring Whole Foods Market and introducing their Takeout Kits, as well as Prime Now, a restaurant delivery program serving 20 major metropolitan areas. All of these businesses have had one goal in mind: customer convenience.

The way we buy our groceries is in the midst of a colossal upheaval. In August 2017, Amazon took over operations of Whole Foods Market—a watershed moment in the continued encroachment of software eating the world. Without missing a beat, and with rapidity rarely seen in the molasses-like grocery industry, Amazon changed signage on everything from produce labels to front door signs at Whole Foods stores across the nation, stocked aisle ends with farm-fresh Amazon Echoes, offered 365 brands to AmazonPrime customers, and, most significantly, slashed some prices by 43 percent on the first day.

As if overnight, Amazon merged their online experience with brick-and-mortar shopping while simultaneously pummeling the grocery industry. Upon the announcement of the sale of Whole Foods Market to Amazon, six grocery chains—Kroger, Wal-Mart, Target, Costco, Supervalu and Sprouts Farmers Markets—lost a collective $12 billion in value. Investors feared that the retail giant would offer significantly lower prices than competitors that would drive customers straight into a Whole Foods parking lot the day the deal closed.

According to Short, “the e-commerce segment of food retail, led by Amazon, and alternative formats will increase in market share from a current 30.4 percent to 44.9 percent by 2022.”

The prediction was correct, but shrewd owners of other grocery chains sharpened their own pricing with this shift in mind. Retailers like Fairway and Trader Joe’s always marketed being less expensive than Whole Paycheck, as it was not-so-fondly dubbed, but they could not keep up with the drop. Money managers argue that while Amazon will certainly become more competitive in the future of the grocery space, the $12 billion loss was a “bit of an overreaction.” Even still, others, like Barclays analyst Karen Short, believe that for grocers to compete, they’ll need to consolidate and merge in order to enhance their purchasing power.

If Amazon can cause this much uncertainty in brick-and-mortar shopping, their online-only reach really knows no bounds. It was a short decade ago that Americans did a meager percentage of their shopping online; that share is now over 10 percent and rising fast. According to Short, “the e-commerce segment of food retail, led by Amazon, and alternative formats will increase in market share from a current 30.4 percent to 44.9 percent by 2022.”

Adding to the list of Amazon/Whole Foods victims are leading meal kit companies like Blue Apron, who entered the food industry with the premise that they’ve solved your no-time-to-meal-plan-and-shop problems. Blue Apron’s troubled IPO tripped further when Amazon rolled out their own meal kit, whose design was particularly appealing with the image of the meal itself embedded on the often bland cardboard packaging that Americans know so well.

The battle for the belly is nowhere near its end; while it’s hard to know exactly what will transpire among the green grocers that still supply the vast majority of our daily bread—upward of 80 percent of the food dollar in the United States alone—we predict future shifts will focus on the environmental impact of delivery-only groceries, intermingling of prepared foods and grocery, deliveries made by blimps and drones, and the constant ping-pong between all-under-one-roof shopping and item-specific shops, such as butchers, bakers and cheesemongers, as companies like Amazon partner with local retailers to ensure community-specific shopping.

We anticipate a future where items from your neighborhood butcher, baker and green grocer, bulk items, clothes and books all land in the same digital shopping cart with an Amazon logo beside it.