Lace up your tennis shoes and get ready to unbutton your pants. 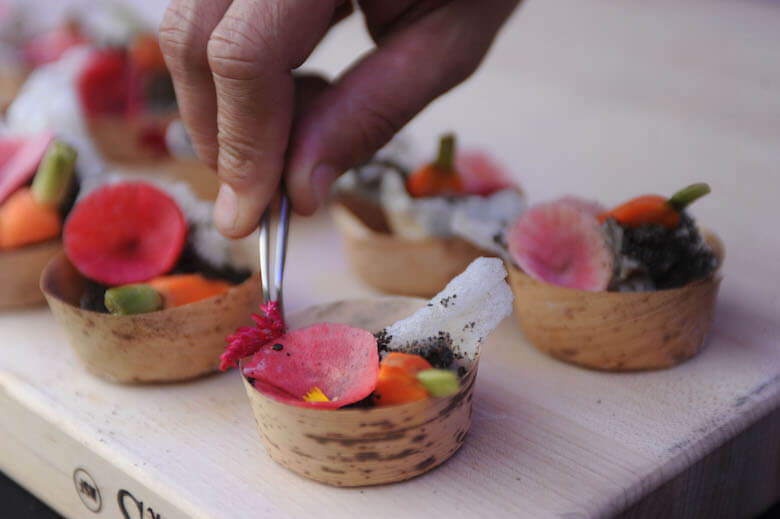 We tried it all. Photo courtesy CitiTaste.

Lace up your tennis shoes and get ready to unbutton your pants, because the Citi Taste of Tennis is back for its 18th year on August 24 at the W New York. Headlined by “Iron Chef” Masaharu Morimoto, the taste around event pulls together world class chefs and top-ranking tennis stars like Alexander Zverev, Svetlana Kuznetsova and Gael Monfils for a giant bash. Consider it your pre-game to the US Open.

Over 30 chefs and restaurants are expected to dish out the event, including all-stars like Jonathan Waxman of Barbuto, Antoine Westermann of Le Coq Rico, April Bloomfield of Salvation Taco, Andy Ricker of Pok Pok, and Judy Joo of London’s Jinjuu.

Eating amazing things and hanging out with tennis stars sounds like a swell time, but there’s a philanthropic bonus: The event benefits national nonprofit organization Wellness in the Schools, a health and fitness initiative that combats childhood obesity in public schools. All that VIP generosity doesn’t run cheap; tickets start at $100 for the Citi Taste of Tennis After Dark dessert party, $275 for general admission and $325 for the whole shebang.

Want to make sure don’t miss out on the best bites? Here’s a taste of what to expect*:

What to eat: Morimoto’s sushi​ ​and maki, wild yellowtail breakdown and duck tacos with hoisin, pico de gallo and tortillas.
Why: The Iron Chef himself, Masharu Morimoto, is this year’s Citigold Lounge host, which means he’s likely to reap the spotlight with some killer bites.

What to eat: Cookie DO’s cookie dough bites and cookie dough shots.
Why: Um, have you seen the line at their NYU flagship? This is basically your chance to VIP your way to the front.

What to eat: Somtum Der’s Isan-style sausage, a spicy fermented sausage made with pork and rice from northern Thailand.
Why: Sponsored by the Tourism Authority of Thailand, you can bet this one was carefully vetted to be the real deal.

What to eat: Barbados’s Executive Chef Damian Leach’s Pina Colada Mahi mahi crusted with pineapple, coconut and cilantro and served with smoked red herring, sweet potato puree, pickled pineapple and cilantro emulsion.
Why: Beyond the fact Leach was dubbed Barbados Chef of the Year in 2016, the dish is basically a best-of-everything tropical bite, because who doesn’t like piña coladas and fresh fish on island time?

What to eat: Grand Banks’ and Jinjuu’s oyster with either a kimchi bloody mary granite or a kimchi bloody mary sidecar.
Why: You can never go wrong with oyster shooters, but this collaboration is particularly special because it’s the rare time you’ll get to try London-based Jinjuu’s kimchi until the next time you hop over the pond.

What to eat: Le Coq Rico’s Eggs à la Méditerranéenne (eggs with tomatoes, diced chicken and North African spices, and fried potatoes).
Why: If you haven’t had a taste of Paris’s coveted rotisserie renowned for its “beautiful birds,” this is your official opportunity to get hooked.

Tickets are available now through tasteoftennis.com/nyc.

*Dishes and talent subject to change.