The Intoxicating Allure of the City’s Traditional Asian Teahouse Culture

Good old-fashioned therapy at the local watering hole happens over oolong, say, rather than a glass of wine or whiskey. 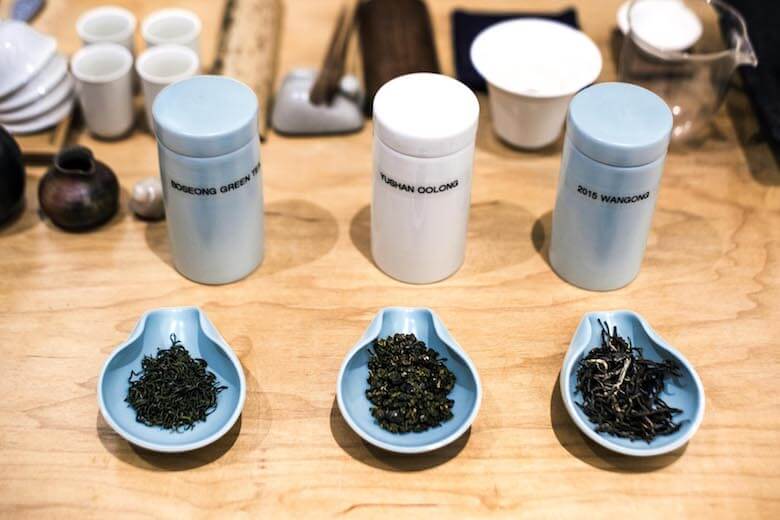 T Shop’s owner sits down with customers and reads their faces like a fortune teller.

What does it mean to get “tea drunk?” There’s a phrase for it in China (cha zui) that describes when you’ve had a cup too many—think a caffeine buzz with racing thoughts and the shakes. In many cultures around the world though, China included, getting at least tipsy on tea has more romantic or spiritual connotations akin to being drunk on love or floating into a meditative state. Good old-fashioned therapy at the local watering hole happens over oolong, say, rather than a glass of wine or whiskey.

Shunan Teng found inspiration in this concept during her travels in China before opening up her tasting room in the East Village. Aptly named Tea Drunk, it’s a place that draws on the similarities between tea-drinking in China and alcohol culture in the West; Teng’s quiet but lively shop on 7th Street is one of only a few local teahouses adapting long-standing Asian tea customs for New Yorkers, offering passports to different countries and exposure to centuries-old traditions smack dab in the middle of Manhattan. 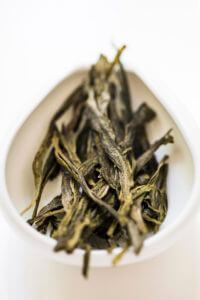 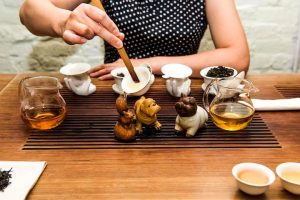 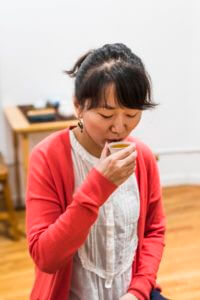 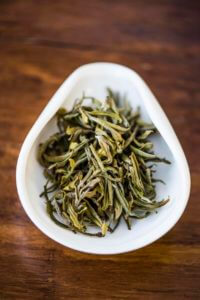 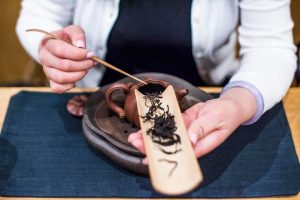 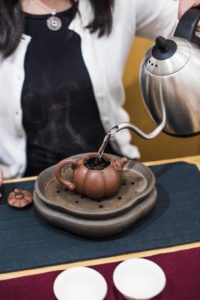 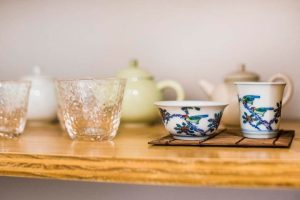 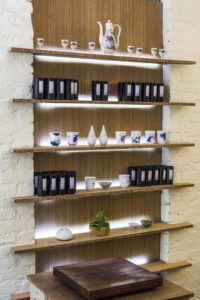 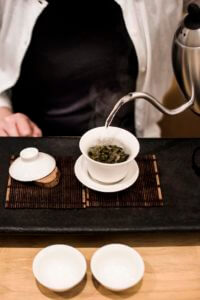 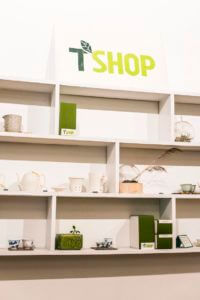 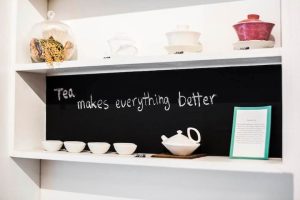 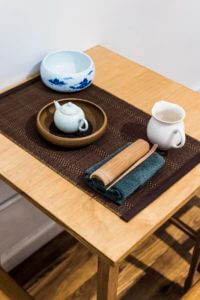 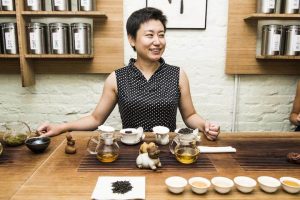 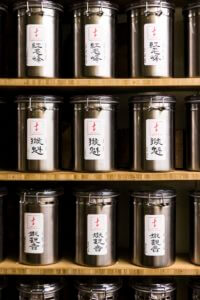 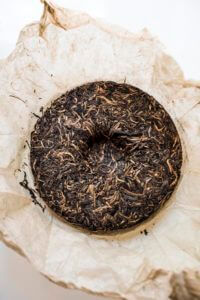 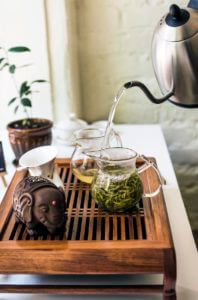 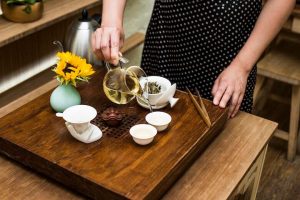 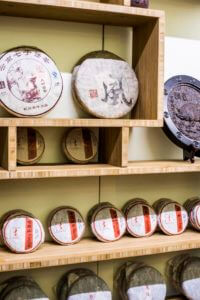 Heading to the teahouse can be a low-key social activity according to Teng, as well as a way to get in touch with one’s feelings through rituals. Guests at Tea Drunk are treated to the gong fu cha method of brewing, which is a traditional Chinese tea service involving multiple steepings of the same tea sipped from small porcelain cups. The menu runs several pages and focuses on heritage teas sourced from some of China’s oldest and most iconic tea-producing regions like Dan Cong from the Phoenix Mountain region or Shui Xian from the Wuyi mountain area (named a World Heritage Site by UNESCO for its cultural richness and biodiversity).

Other teahouse owners like Theresa Wong of Nolita’s T Shop more actively adopt the role of bartender-as-therapist by catering to each drinker’s mood. Wong sits down with customers at her tea bar and reads their faces like a fortune teller. Her descriptions drift from in-the-moment observations to personal memories inspired by her travels in Asia and years spent working at Fang Gourmet Tea in Queens.

Wong greeted me like an old chum on a hot day and, as if she sensed I was already drinking too much black tea, suggested I start drinking more floral high mountain oolongs and lighter green teas for summer. “Tea is more than just a beverage,” she added. “It’s about noticing your own habits.” 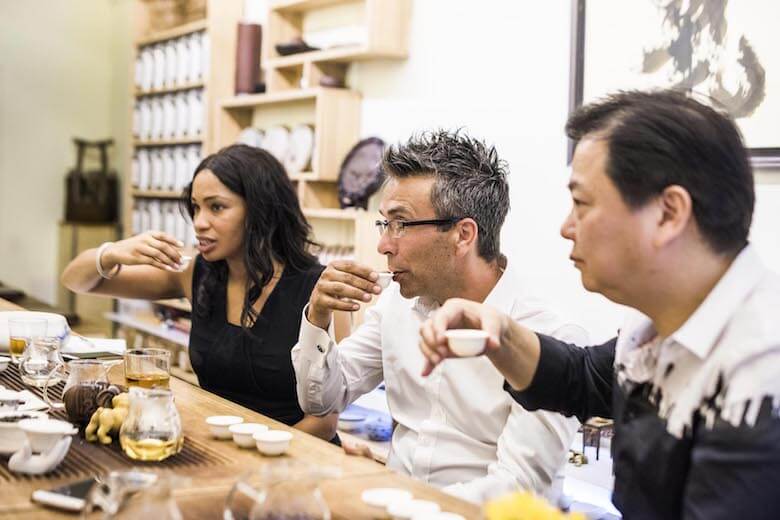 Guests at Tea Drunk are treated to the gong fu cha method of brewing, which is a traditional Chinese tea service involving multiple steepings of the same tea sipped from small porcelain cups.

Keeping with that idea, many New Yorkers these days are as comfortable ordering a matcha to-go as a skinny vanilla latte. While Japanese tea ceremony master Souheki Mori sells takeaway tea at her new matcha bar Setsugekka, it’s preferable to sit down with her at the bar for a tasting flight or relax on the more traditional tatami mats. (The shop’s also conveniently located just a few paces down 7th Street from Tea Drunk in case you’re interested in comparing traditional Chinese and Japanese tea experiences side-by-side.) Mori’s interpretation of Japanese tea ceremony includes hand-picked matcha selections from small family farms, unique ceramic cups and small-batch sweets.

Setsugekka and Midtown’s Kitano Hotel also take bookings for private tea ceremonies. The hotel—the only Japanese owned in New York—partners with tea masters and exclusive suppliers to host occasional tea ceremonies in its tea and tatami rooms. This spring, for example, the Kitano hosted an event led by grand tea master So’oku Sen, whose lineage can be traced back to Sen no Rikyu, the 16th-century father of Japanese tea ceremony. “You have to learn to enjoy your life as it is now,” master So’oku Sen told us guests as we shared tea from a 400-year-old cup while highlighting his preference for integrating modern brew-ware with antiques, harmonizing the old with the new. 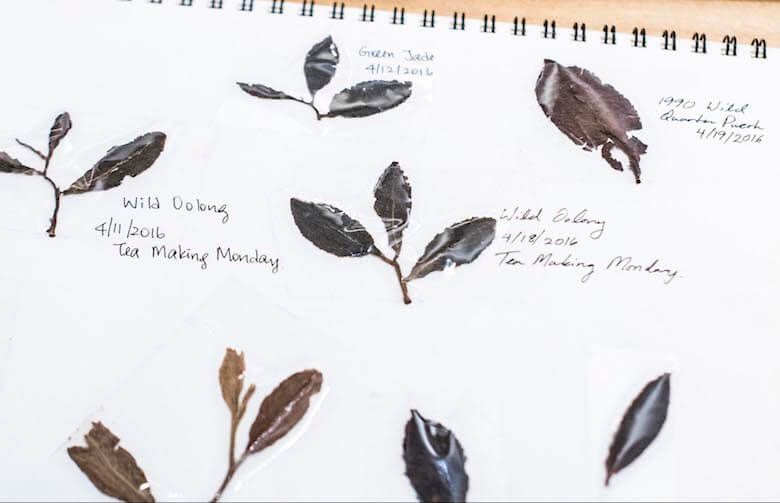 Theresa Wong’s descriptions drift from in-the-moment observations to personal memories inspired by her travels in Asia and years spent working at Fang Gourmet Tea in Queens.

Practicing these traditions can feel daunting at first, but Japanese tea ceremony is ultimately about a “relaxed communication between the host and guest,” according to the Kitano’s general manager Zack Zahran. “It’s not just about the etiquette of serving and drinking tea,” Zahran added, “but about taking time to appreciate the flowers, teaware and various utensils that are selected for each particular ceremony.”

There are in fact many ways to approach the tradition in the view of tea master So’oku Sen despite the many rules involved. “The most important thing,” he said, “is using whatever’s available to you and being fully present in the moment.” Taking the time for the experience can be rich and intoxicating, like Champagne without the hangover.