Bottles are limited, so be sure to find yours before it’s too late. 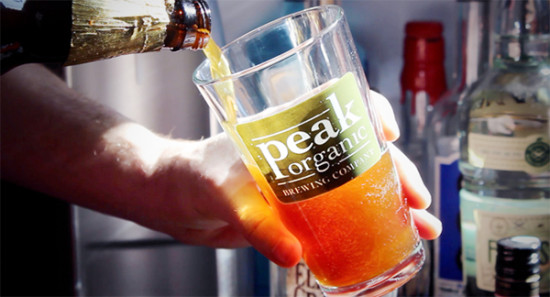 It was only natural for the Portland, Maine brewing company to reach out to the Hudson Valley coffee roaster to make a different kind of coffee-flavored beer. Irving Farm has been sourcing local, organic ingredients since 1999; Peak has been doing the same officially since 2009 (although president and founder Jon Cadoux had sustainability on his mind since he began homebrewing in the 1990s). While focused on two different sets of ingredients, both companies adopted the same mindset of sourcing locally and sustainably.

Peak brewed the first batch of Espresso Amber Ale back in 2008, which officially made it the first-ever fair trade beer to hit taps (at the time, Peak brewed the beer with the help of local coffee roaster Coffee by Design). When Cadoux first reached out to Irving Farm, the two companies brainstormed which Irving Farm coffee would best fit the malty base of the beer. “When the Irving Farm team told us about the Honduras co-op in Capucas, we knew that was the one,” he says. With both the right flavors, and the values to match — the co-op has fair-trade, organic, and Rainforest Alliance certifications — there was no coffee better suited for the Espresso Amber Ale. “The guys at Peak were really excited about this co-op, and the story behind it,” says Teresa von Fuchs, director of wholesale for Irving Farm. “They really care about where ingredients come from, and where people come from, and so do we.”

Von Fuchs and the Irving Farm team handed over 1,300 pounds of the Capucas coffee to boil down into a thick concentrate, which was added to the tanks to sit for six days. The Hallertau and Cascade hops added balanced out the strong malt backbone of the beer, made of 2-row, caramel-60 and Munich malts.

Sustainably minded coffee and beer drinkers will love the story behind the Espresso Amber Ale; many beer geeks will simply just love the taste. Unlike most coffee-infused beers, the trend du jour in craft beer, the Espresso Amber Ale’s malty base “isn’t fighting with the coffee,” says Cadoux. No creamy, vanilla-tasting porters or stouts here; the amber ale base only enhances the same notes found in the Capucas coffee. Green apple, cinnamon, and citrus may not be the first descriptors that come to mind when talking about coffee (or beer, for that matter), but those are exactly the notes that come out in both the Capucas coffee and Espresso Amber Ale. The bright, citrusy aroma meets its match with just a hint of the toasty espresso in the taste.

Don’t expect the Espresso Amber Ale to be out long, though. Since the beer uses an extraordinary amount of coffee in the beer, it’s only feasible to do it once a year. To that extent, the collaboration between Irving Farm and Peak Organic “really is a labor of love,” says Cadoux. For the love of coffee and beer: two beverages we simply adore.

You can find Espresso Amber Ale at various locations throughout the city, including on tap at Irving’s 88 Orchard location.