Here are a few of the spots around the city that are serving non-alcoholic beverages this Dry January and beyond. 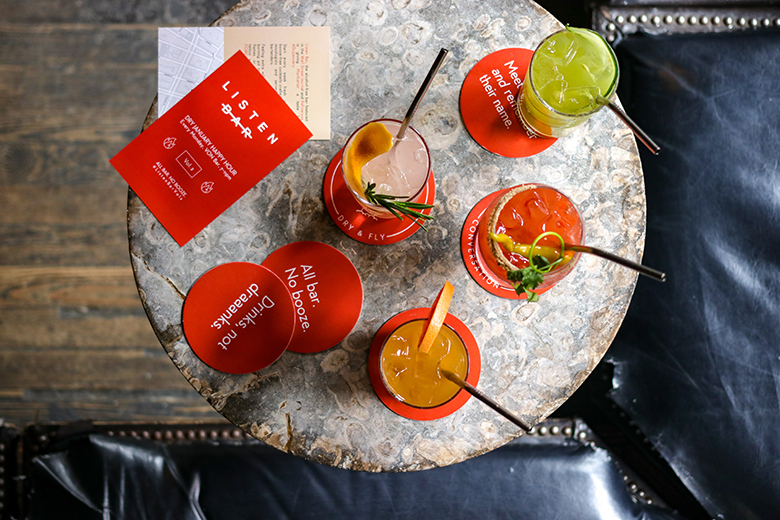 This might be Dry January, the increasingly popular teetotalling month when many give up booze, but zero-proof (or non-alcoholic) cocktails have become go-tos all year round.

“Last Valentine’s Day, I served as many mocktails as cocktails,” Dear Irving’s Jena Ellenwood says. “Someone ordered one for his wife and blurted out, ‘We’re pregnant but we can’t tell anyone yet! Except I just told you!’”

Pregnant or not, projects like Lorelei Bandrovschi’s completely non-alcoholic Listen Bar have emerged as a way to prove that a good time is possible sans inebriation.

“Listen Bar started as this idea, or seed, five years ago when I first took a month off of alcohol on a dare,” Bandrovschi explains. “I went into it sort of reluctantly, because I’m not someone who likes to put rules on myself or restrict myself. Once I actually did it, rather than restricting me, it opened me up.”

After a successful Williamsburg pop-up last year, she’s launching a Monday happy hour series at Von in the East Village for the month of January. The menu features drinks developed by industry veterans such as Jack McGarry of The Dead Rabbit, Pam Wiznitzer of Henry at Life Hotel, and Veronica Correa, all selected by Eamon Rockey. Each happy hour will feature events, from tattooing to karaoke to a CBD focus on the 14th. Bandrovschi believes the concept has legs: She’s launched a crowd-funding campaign to get Listen Bar into its own permanent space.

Here, a few of the spots around Manhattan that are serving non-alcoholic beverages this Dry January and beyond.

Dear Irving
55 Irving Pl.
At Dear Irving, there is no set menu of zero-proof drinks, but the bartender will make you something based on the flavors you’re seeking. “We have such a great mise en place at our disposal behind the bar; many of our menu cocktails involve housemade syrups and juices, not to mention all of the fresh fruit and herbs,” says Ellenwood. “When a guest asks one of us for a mocktail, we go down a line of questions with them that are very similar to how we’d approach a Bartender’s Choice cocktail.”

One of their favorite weapons is Wölffer Estate Verjus. “It adds a nice crisp acidity to just about anything and really rounds out the drink without adding sweetness and weight,” says Ellenwood.

Listen Bar
At Von, Mondays in January, 3 Bleecker St.
Frozen drinks, a hot toddy, and fizzy kombucha are all on the menu here, along with an alcohol-free Bloody Mary–type sip by Aaron Polsky called Dollar Slice, made with Seedlip Spice 94, tomato, sriracha and a “pizza salt” rim. 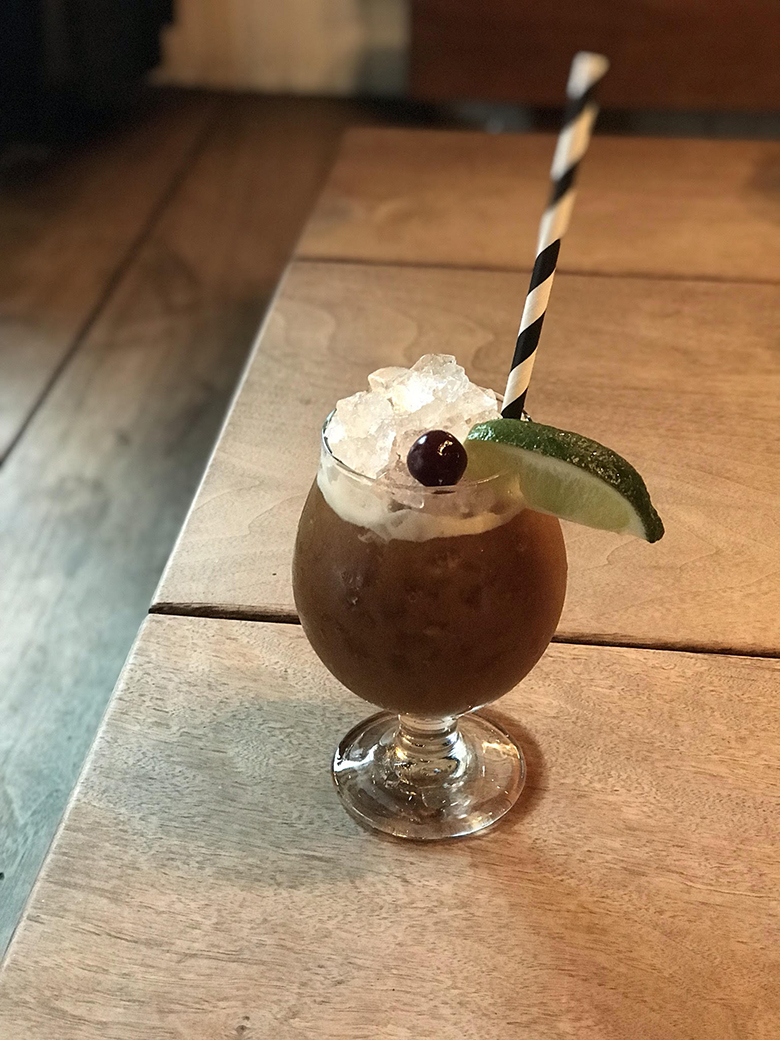 The Penrose modeled one of their non-alcoholic options after the tropical drink emoji. It features cold-brewed coffee, passion fruit puree, orgeat, lemon juice, and then gets served over pebble ice.  Photo courtesy of the Penrose.

The Penrose
1590 2nd Ave.
This Upper East Side bar modeled one of their non-alcoholic options after the tropical drink emoji—and thus named it The Emoji. It features cold-brewed coffee, passion fruit puree, orgeat, lemon juice, and then gets served over pebble ice. Or you could try the Down and Wavy, with Louis Applestrong apple juice, pomegranate juice, grapefruit juice, lemon juice, and topped with Libertine botanic beverage.

Existing Conditions
35 W. 8th St.
There are four options on the menu at the West Village bar from Dave Arnold and Don Lee, from fruity to spritzy, all made with the same sciency technique they bring to the traditional menu. Try the Doyenne, which includes carbonated clarified comice pear.

Saxon + Parole
316 Bowery
There’s a rather long list at this Bowery restaurant, because bar director Maxime Belfand wanted to provide options for those who would prefer not to go for booze with their meals. Order the cucumber and thyme fizz for something refreshing and herbaceous, or go for the sweeter Bowery Punch with pineapple. Organic Rosebud coconut-oil-based CBD oil is available to add to any of the options for a $6 charge, if chill is the goal.

The Fat Radish
17 Orchard St.
When going out for non-alcoholic drinks, Seedlip will come up a lot. It’s the first distilled zero-proof spirit, allowing cocktails to have the feel of a classic. At this vegetable-focused restaurant, try the Seedlip Spice 94 and tonic, garnished with an anise pod and cinnamon stick to bring out the warming flavors in the spirit itself.

Dante
79-81 Macdougal St.
Doing Dry January shouldn’t mean giving up negronis. Enter the Faux Groni. With the help of Seedlip Spice 94, non-alcoholic vermouth and bitters and a bit of saline, the go-to bar for all things Campari has figured out a way to hit all those bitter notes without a hint of alcohol. 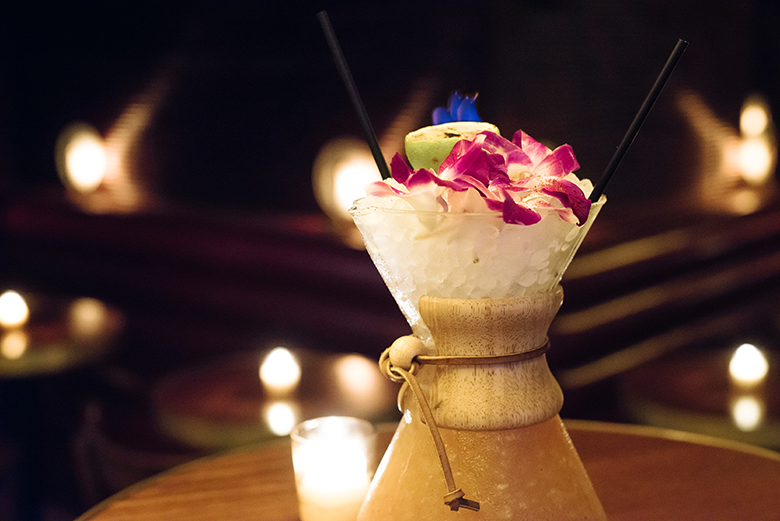 Tahitian Coffee No. 2 by Jim Kearns, brings together cold brew, lime, orange, passion fruit, guava and honey, all garnished with orchids and grated coffee and served in a Chemex. Photo credit: Nick Vorderman

Slowly Shirley
121 W. 10th St.
At this cozy downstairs bar, try the Tahitian Coffee No. 2 by Jim Kearns, which brings together cold brew, lime, orange, passion fruit, guava and honey, all garnished with orchids and grated coffee and served in a Chemex, so there’s still a great shot for Instagram.