Proof that flair bartending is alive and well (and cooler than you think). 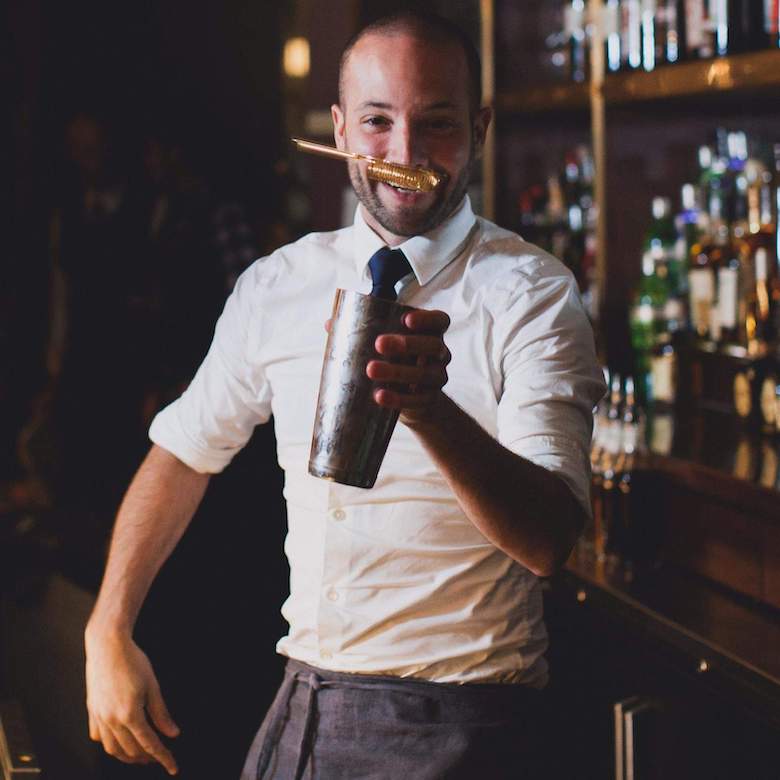 Chris Cardone is a master of flair. Photo by Shannon Sturgis.

I first met Chris Cardone behind the bar in 2014 at White Street, a cavernous brick-laden architectural masterpiece helmed by Top Chef and Danny Meyer vet Floyd Cardoz. While the restaurant itself didn’t last long—it shuttered quietly a few years later—Cardone held fast in his own chosen path: a champion (the only one, in fact) of New York City’s flair bartending scene.

Flair is one of those mysterious niches of the bar world that isn’t talked about much these days, broadly speaking. Sure, the craft has been marred by the ’80s, its lone syllable synonymous with excessive hair gel and black button-down shirts, but it’s still out there, thriving in certain pockets of the industry and hanging on by a thread in others. Las Vegas is a flair mecca, a place where guests inherently love a show and aren’t in a hurry to have their drink in hand; internationally, London, Dubai, and pockets of Eastern Europe are home to strong flair culture. New York, on the other hand, is perhaps the worst place to showcase your skills, no matter how impressive—a phenomenon Cardone attributes to New Yorkers’ notorious lack of patience coupled with the fact that the audience is not easily impressed. “If I had a nickel for everyone who ever said, ‘Just make the drink, show-off,’ I could retire,” he shares. “My theory has always been that New Yorkers are always too busy and trying too hard to be impressed with flair. They just want their drink, and they want it now.” Las Vegas flair great Tobin Ellis has famously referred to New York City as the “black hole of flair bartending” and Cardone can’t disagree: “Since the day I started, the majority of the guests I’ve had would rather see a flair bartender drop and break something rather than hit a big move successfully.”

Despite New York’s general lack of enthusiasm for flair, Cardone has harnessed it in an unwavering embrace—single-handedly, his humble mastery and long-term commitment have kept it alive in the city all these years. And strangely, it’s worked in his favor. But where did he get his start?

Cardone’s flair training and bartending career go hand in hand, the seed for both planted in the summer of 2000 when he signed up for bartending school, where a five-hour flair course was on offer. “I wanted to be Tom Cruise in Cocktail, or one of those badass bartenders in Coyote Ugly, which had just been released that summer,” he tells me. “I purchased a VHS tape and memorized and perfected every single move. I competed at my first flair competition in the Grand Cayman Islands that same year and my eyes were opened to the true world of flair bartending.” He began to find his everyday groove in working flair, which he defines as techniques that can be integrated into service without slowing things down (as opposed to exhibition flair, the showier style that comes to mind when we think of flair). At first, it was a lesson in humility, but eventually, Cardone began to make a name for himself, placing consistently in finals.

Flair competitions have brought Cardone all around the world, undeterred by the lack of audience in his home city (where guests were concerned, at least). Within the industry itself, his prowess caught the attention of some of the bar world’s greats. “There has always been a strange appreciation in the industry for flair bartenders who can really throw,” he tells me. “I remember one of the craziest experiences was being asked to teach some basic flair techniques to some of the bartenders at Milk & Honey years ago—it blew my mind. Milk & Honey was my first experience of a speakeasy cocktail bar, where the drinks were insanely good and it literally changed how I saw bartenders and bartending. And then about seven years later, I was there teaching flair.”

Cardone’s moves also gave him a competitive advantage on global stages during major bartending competitions. “I remember using working flair during my rounds when I competed in [Diageo’s] World Class competition, and I always found it fascinating that all of the judges—huge cocktail icons—were always so excited by it. They would even request it from me sometimes during my rounds. That’s when I knew that flair culture and the cocktail culture could co-exist. That’s been my personal goal since 2007, to blend the two arts together.” And he was right: ultimately, Cardone was named U.S. Bartender of the Year at World Class, proving that a little show goes a long way.

These days, it’s been relatively quiet for flair, becoming somewhat of an underground scene, according to Cardone. “Since the explosion of the cocktail movement and the extreme focus on classic cocktails and what goes into the glass, flair has really taken a backseat,” he says. “Working flair still exists, however; you see bartenders spinning tins, stirring four mixing glasses simultaneously, straining from incredible heights and throwing cocktails across their entire bodies. Flair is still there, but you just have to look much much harder.”

As far as the future of flair in New York City goes, Cardone is optimistic. “Everything is cyclical. Everything. If you would have told me that tiki bars and drinks like the Grasshopper and Amaretto Sour could come back in full swing, and that people would yearn for a dive bar again after being snubbed by one too many cocktail enthusiasts, I would have said, ‘no way.’ But it’s just the way the world works—people are always looking for the next bigger and badder thing. And flair will come back. It certainly won’t look like it did back in the movies, or what I saw in the early 2000s, but it will return. Just like the speakeasy and the Sidecar came roaring back 15 years ago, so too will the art of flair bartending.” Something tells me he’ll be the one leading the charge.