Is This the Most Polarizing Cocktail Ingredient in New York City?

Tarragon: you either love it or violently detest it. Here’s the backstory. 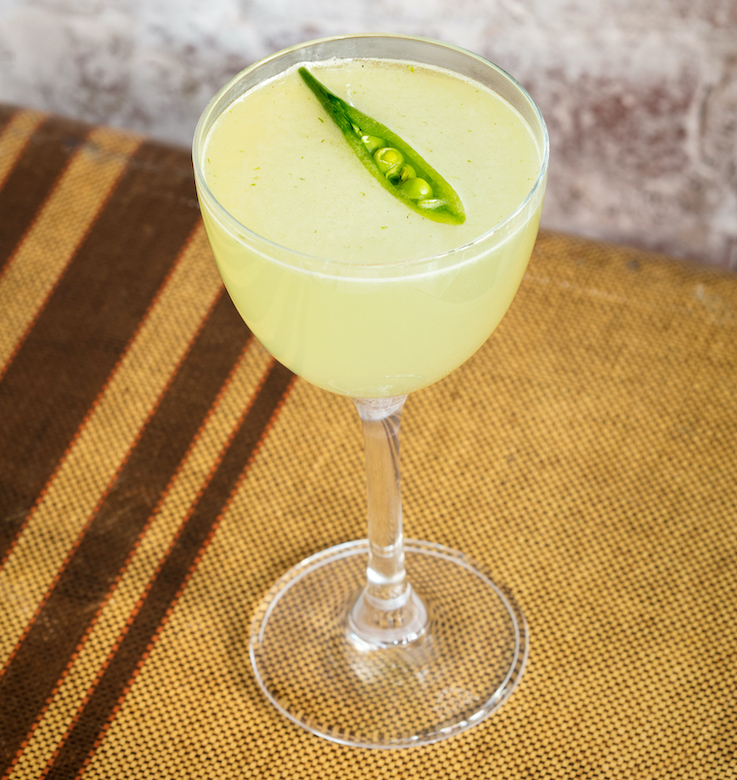 The Lower East Side uses the controversial herb to great ends. Photo courtesy The Fat Radish.

Let’s face it: Tarragon is weird. While it’s absolutely essential to French cuisine as one of the four core fines herbes (béarnaise is nothing without it), the general consensus on tarragon’s flavor profile can only be described as polarizing—thanks to the herb’s main chemical compound, estragole (which is also found in anise and fennel), it’s a licorice bomb that can really rub palates the wrong way. Long story short, you either love tarragon or violently detest it.

It goes without saying that the global cocktail industry has had some reservations in embracing tarragon fully, not only because of the licorice haters out there, but because it’s just not an easy ingredient to wrangle for a multitude of reasons. The latter is something that I, a half French person with an inherent need for everybody to like tarragon, discovered on my journey to understanding why this herb is so underused and underappreciated (in my opinion) in the New York drinks scene.

In a survey I conducted within a large bartender group, the response was divided, as I suspected it would be. Gabi Porter, a drinks industry photographer, described tarragon as “vile” and as having a “saccharine flavor combined with the worst elements of licorice” while another guy responded with nothing but a thumbs-down GIF worth a thousand words. Others, however, sang its praises, but not without noting some of the problems that come with using this herb in drinks (beyond the fact that some just find it disgusting).

“Leafy, tender French tarragon is an under-celebrated delight in cocktails, but it’s hard to keep fresh and beautiful,” says Amanda Whitt, a bartender at Roof at Park South. “Soft herbs are just a crapshoot depending on the ambient temperature in your bar.” If you’re working with tarragon as a garnish, Whitt recommends keeping only what you need for the next hour or two on display at any given time while keeping it cool and moist to avoid wilting. Luis Hernandez of Lost Hours inside Hotel 32|32 is also a fan, though he’s had to find a way around the leaves’ fragility. “Nitro muddling is the best way I’ve found to use [tarragon]. It’s fairly mushy and easy-to-bruise that can become a bit muddy when muddled or made into a syrup without a strong modifier like sodium metabisulfite,” he tells me. “The best part is the aroma, and nitro muddling keeps that (and the color) intact, which you can lose or change in a syrup, infusion, fresh muddling, and other uses.” In terms of spirit pairings, Whitt is partial to using pear eau de vie with tarragon, while Hernandez has found that absinthe, Clairin, Rhum Agricole, gin, vodka, and sherry all work well. Lauren Klemm, another New York bartender, notes that “Dolin Blanc just demands to be infused with it.”

A unanimous favorite among New York’s tarragon cocktail offerings, according to supporters who participated in this survey, is the straightforwardly-named Tarragon Trail at The Wayland. This drink features a Tanteo Jalapeño base, a tarragon and white peppercorn syrup, lime juice, pineapple, and club soda, garnished with a sprig of tarragon––it’s a wildly popular order that’s been on the menu for over five years. Bartender Linda Guadalupe Garcia describes it as having “just the right amount of spice and tarragon flavor with some effervescence.” Perhaps this is a good place to start if you’re a tarragon fan or are on the fence about it, and for those in the same boat who can’t make it out to The Wayland to give it a taste, here’s a an easy enough recipe from bar pro and tarragon enthusiast Victoria Canty to try at home.

Combine all ingredients besides soda into shaker with ice and shake vigorously. Double strain into a Nick & Nora or other stemmed cocktail glass, top with soda, then garnish with a halved snap pea and absinthe spritz.