In keeping with the little-‘c’ catholic nature of Irish identity in this city, every New Yorker we’ve asked has a different favorite pub. 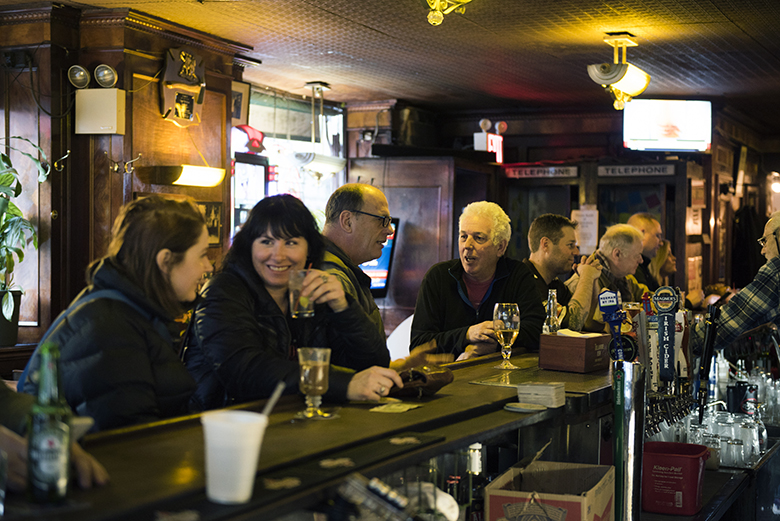 Inside, every stool has been taken by the after-work crowd. One imagines Thursdays have looked just like this since the bar opened in 1892.

The men’s clothing store at the corner of 18th Street and Park sells Old Town Bar and Guinness T-shirts. They get a prime spot in the window, at least in the weeks prior to St. Patrick’s Day. While the shirts are fashionably worn, the real sign hangs outside the bar itself not far away, glowing red and green, its weather wear earned by exposure to the elements. Specials are printed out and taped up, the day’s soup a chicken noodle. Inside, every stool has been taken by the after-work crowd. One imagines Thursdays have looked just like this since the bar opened in 1892. 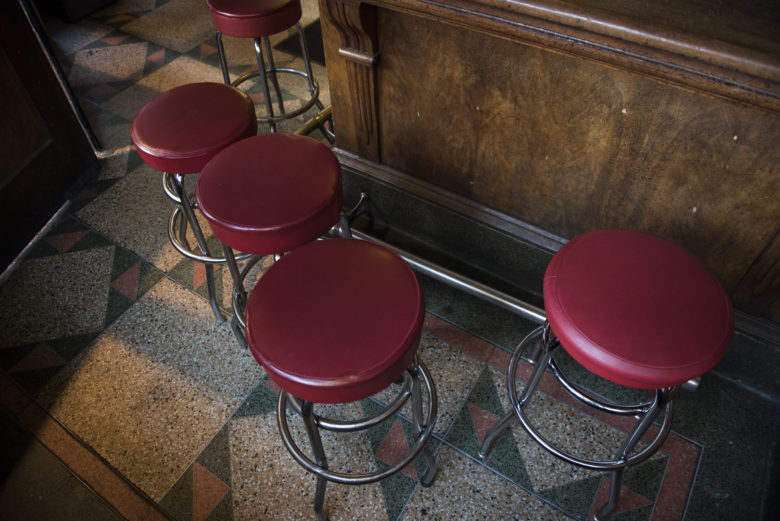 A love for whiskey, bar stools and the Pogues does not an ancestry make. Yet it provides a central connection, a jumping-off point. Above: Bar seating at McManus.

Meditating on the Irish pub is a hobby of mine, though I don’t perch myself at any bar with enough regularity to ever feel like a local. There are too many new cocktail bars, most of which make me feel empty and sad—nothing like the worn warmth of Old Town or McManus or McSorley’s. Those bars make me feel like part of history and humanity, as cliché as that is, and serve the only drink I really need with any regularity: well whiskey and soda water, shot from the gun, or a beer that can be categorized simply as “beer.”

On a recent episode of WTF with Marc Maron, the actor Steve Coogan, who grew up Irish in Manchester, England, said there aren’t enough Irish people in the world to justify the number of pubs. I’ve been thinking about that, as a three-eighths Irish-American who shares a last name with the first Catholic president. A love for whiskey, bar stools and the Pogues does not an ancestry make. Yet it provides a central connection, a jumping-off point. Someone told me last month, while we were seated at a bar in San Juan, Puerto Rico, that it’s very Puerto Rican to be Irish. History tells a less poetic story that nonetheless proves a link. 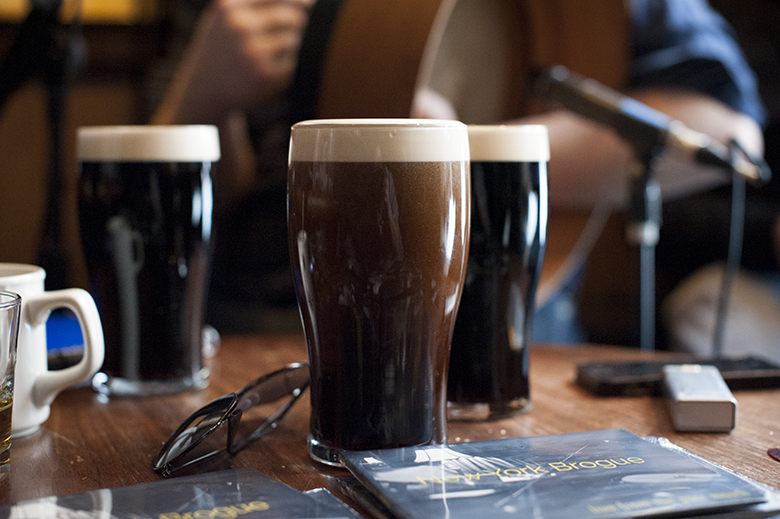 “Old Town or McManus or McSorley’s make me feel like part of history and humanity and serve the only drink I really need with any regularity: well whiskey and soda water, shot from the gun, or a beer that can be categorized simply as ‘beer.’”

And so do the pubs of Manhattan. A sign outside some Midtown spot etched with the phrase “IRISH TO THE CORE” advertises a Taco Tuesday, with deals on margaritas and shots of tequila. Others light up neon signs shaped like shamrocks, the Corona logo in the center. History also tells us it’s pretty Irish to support Mexico.

At Coogan’s, in Washington Heights, the neighborhood’s demographic is reflected in the decor. They boast of it on their website: “Posters of President John F. Kennedy and Senator Robert F. Kennedy are hung side by side with pictures of Leonel Fernandez Reyna, President of the Dominican Republic and oil paintings by Sam Garcia, a local artist with a penchant for using likenesses of local politicians and police officials in his paintings of medieval and modern street settings,” it reads. “In addition to meatloaf and burgers, a customer can get rice and beans, as well as pastelitos, flaky turnovers filled with chicken.” 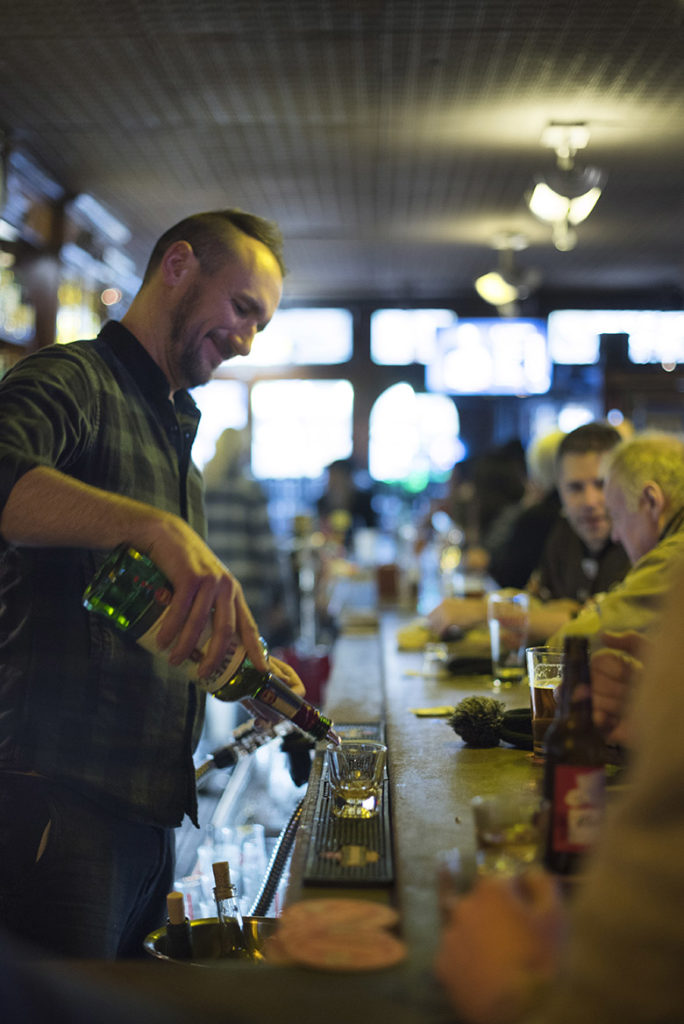 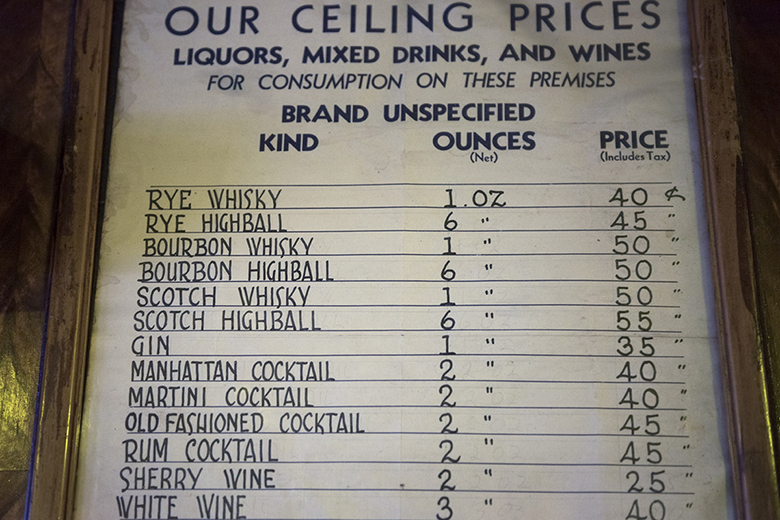 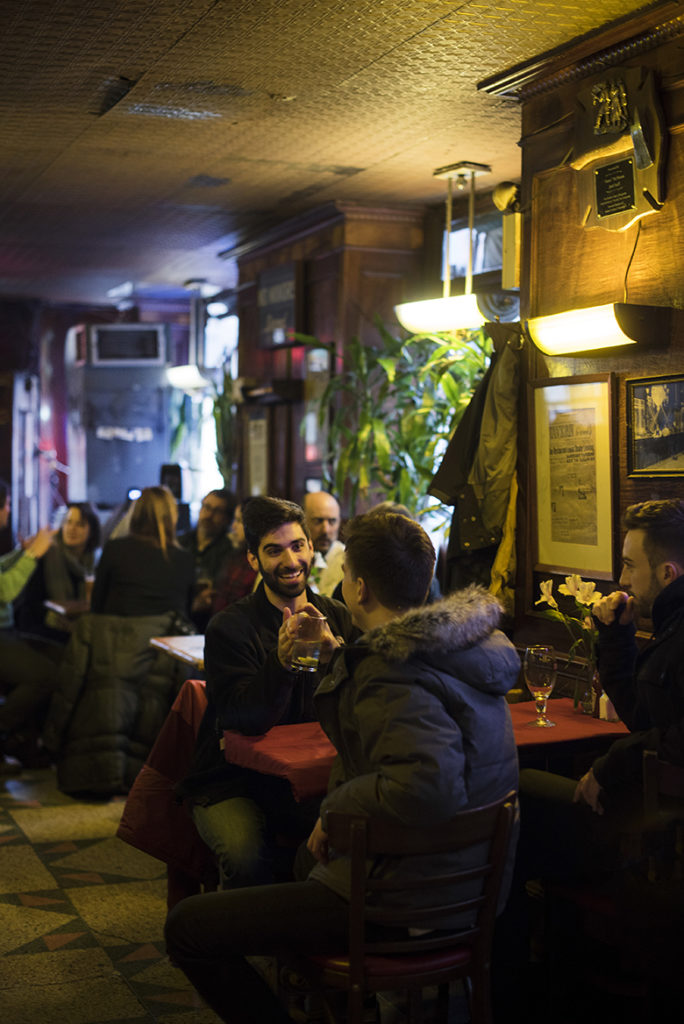 In keeping with the little-’c’ catholic nature of Irish identity in this city, every New Yorker I’ve asked has a different favorite pub. Some prefer the string lights of Paddy Maguire’s Ale House on Third Avenue between 19th and 20th. Molly’s, also on Third Avenue, opened up in 1960 and maintains its traditional, sawdust-covered floor. Others go for White Horse Tavern, which has both West Village and Financial District locations, despite the fact that “there’s nothing cool about it.” For Irish whiskey makers, Swift Hibernian Lounge on East 4th Street is the go-to selection. A newer option, Grace’s on 14th Street, from one of Swift’s male owners, has a cocktail menu developed by some of the city’s most brilliant women bartenders. 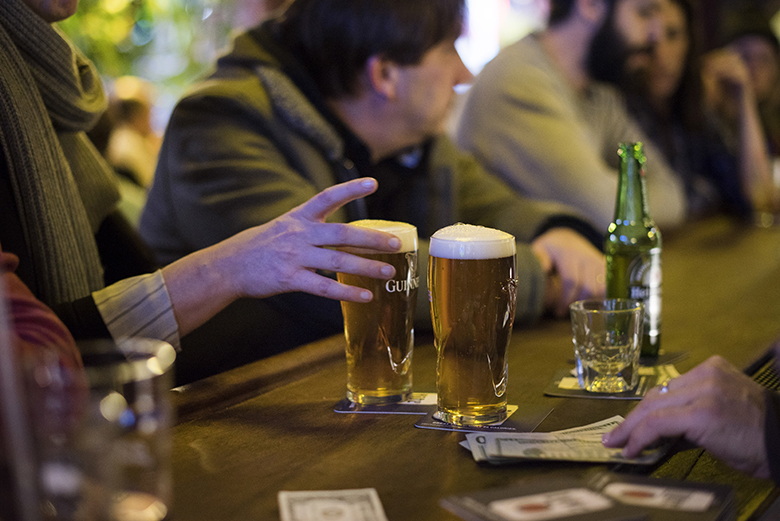 In keeping with the little-’c’ catholic nature of Irish identity in this city, every New Yorker I’ve asked has a different favorite pub.

There’s almost always a nostalgia component to whichever spot one chooses. Sláinte on Bowery helped get a newcomer to the city acclimated. Blarney Stone on Eighth Avenue provided a site for underage fun way back when, for some who recall never spending money but always having a drink in hand. Irish pubs provide unpretentious space—sometimes even for those who can’t yet legally drink—where cheap drinks reign. 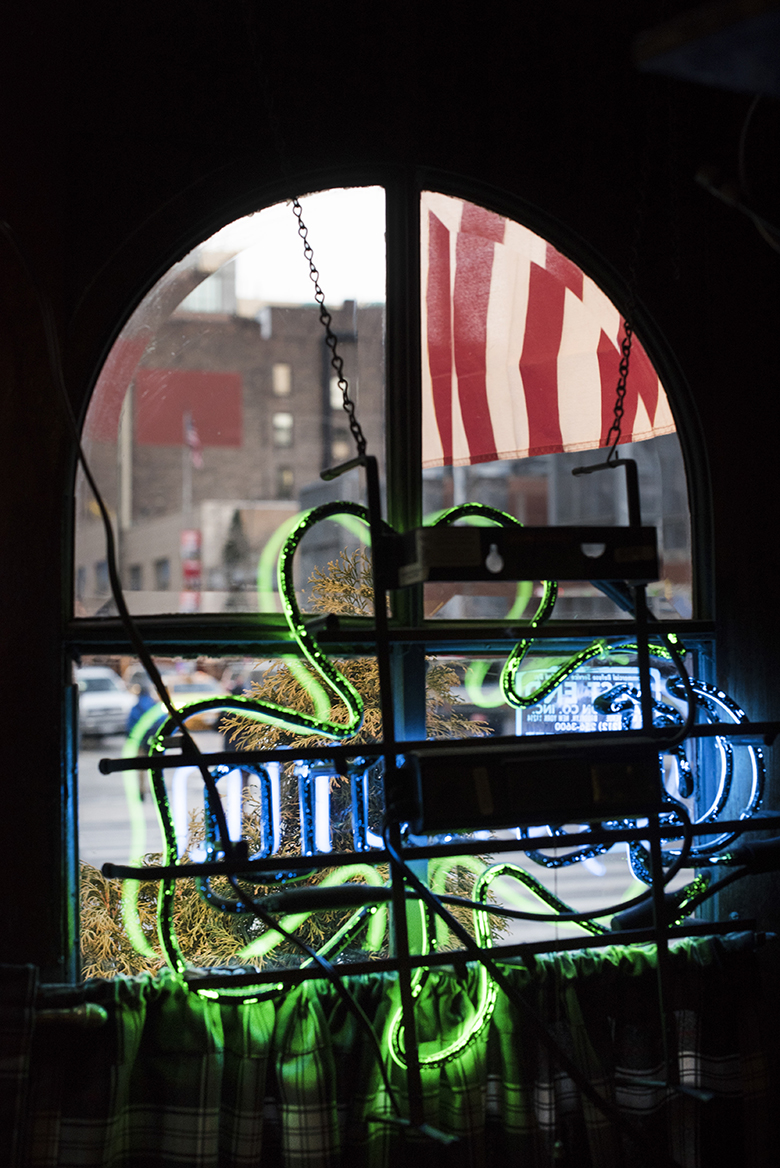 With St. Patrick’s Day approaching, the looming threat of drunken swarms becomes a fear. For that day, everyone claims to be Irish, proving it with green glitter shamrocks on cheeks and green sequined hats from the party store. Maybe they’ll be wearing one of those Guinness T-shirts sold next to Old Town Bar. They’ll surely be on the hunt for green beer and shots of Jameson; maybe they’ll sponge it up with corned beef and cabbage. This is the day when the pubs feel the least like they’re for everyone, though I’d argue experiencing the scene, at any pub you choose, is worth the trouble—so long as you go home before the green puke begins to flow. Every other day of the year, though, there’s nothing more Irish here than being whatever you are.