How One Bartender Puts His Briny Skills to Use in Cocktails

Experiment with brine to add new dimensions to your cocktails. 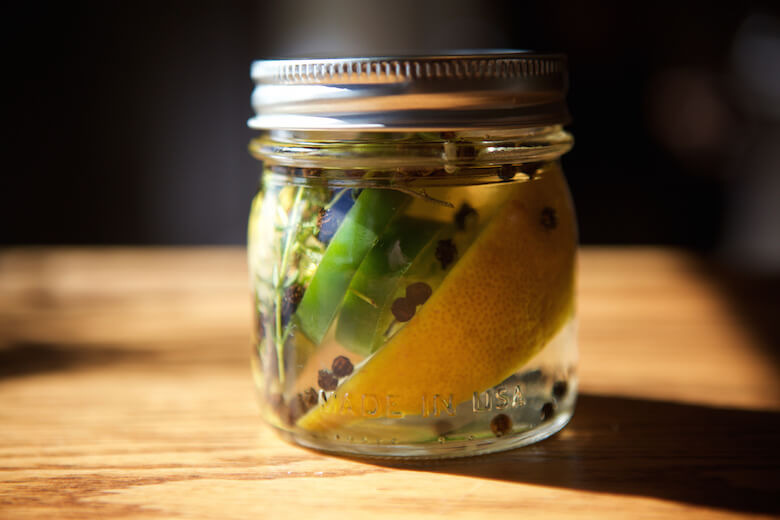 Until recently, it was almost unheard-of for bartenders to cross the line into the kitchen, or for kitchen staff to ask questions about cocktail development. The locavore and Slow Food movements, combined with an increasing interest in wasting less and using more, has seen old barriers vanish.

Luther brings nations, if not worlds, of experience to fermentation. These days, he puts his briny skills to use in cocktails at Sweet Polly. That’s in Brooklyn, but Luther brings his fascination with fermentation home from Malaysia, where he was the bar manager at Ril’s Bar. The Malaysian influence merges with Luther’s pickling inclination in drinks such as his daiquiri with house-made brined banana purée.

Faced with hospitality pros, Luther gets happily geeky. Lactobacillus, he says, thrives in salt. “Not much else does.” That makes salt-pickling one of the safest, as well as easiest, ways to ferment foods.

The pickles must be completely submerged. A neat cheat from Luther: a liquid-filled sandwich bag makes a functional, affordable weight. If pickling becomes a passion, Amazon has an abundance of glass fermentation weights.

He encourages people to play with salt levels in making brine: two percent, three, four, five … The percentage makes a difference. “The higher the salt, the slower the ferment, and the crisper the pickle.”

For the workshop’s hands-on component, Luther lines up fruits and vegetables, including carrots, radishes, apples, and pineapple. Another row has herbs and spices, including mustard, cardamom, tarragon, ginger root, and tea.

Why tea? “If you’re trying to firm up your ferment,” Luther says, “tannins will help.” Tea isn’t the only option, of course. You can use grape stems (reducing waste), chips from oak barrels … just factor in flavors, such as smokiness from Lapsang Souchong or toasted oak, when you’re seasoning the brine.

Luther recommends using the brine. A stirred example: as a martini component, the liquid from orange and rosemary pickles contributes texture, as well as flavor.

Experiment with brine. Make it sweet and salty by using it as an ingredient in syrup. That syrup, Luther tells the group, has to be chilled. A room full of hospitality workers narrow their eyes, contemplating making pickles for garnishes, turning brine into syrup, and using that cold liquid in … For a moment, everybody’s dwelling in imagination, and the savory futures are tasting good.