Making grenadine is not such a laborious task, but trying out a well-crafted version is something we like to dabble in every now and again. 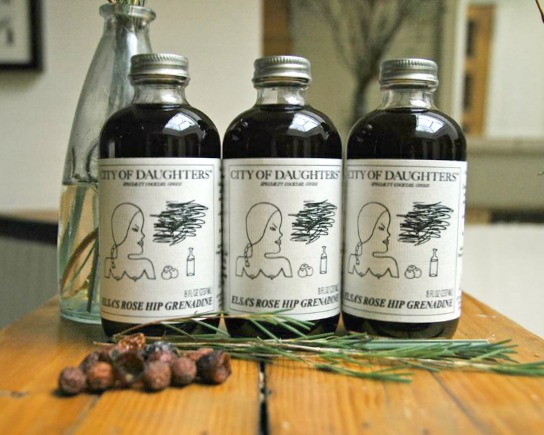 So, the other day, I wandered into the Flatiron outpost of Whisk, lured by all the gleaming pots, brightly colored spatulas, and all other means of pretty, pretty kitchen gear (some of which I had no idea I absolutely must have until I laid eyes on it).

I exercised some mighty self-restraint, but one little thing I couldn’t pass up. I figured if it was the single, fit-in-my-bag item I walked out of there with, it was a pretty good compromise in the treat department, and would make a good addition to my home bar shenanigans. A squat 8 oz. bottle caught my eye with a spare, scratchy, rudimentary drawing of woman naked from the chest up on the label (honestly, kind of uncomfortably reminiscent of Beavis & Butthead-era cartoon art, but if I’m having some kind of art disconnect here, feel free to let me know what my pop-culture laden brain is missing) with the words “City of Daughters: Specialty Cocktail Goods” across the top; on the bottom if read: Elsa’s Rose Hip Grenadine. It was the only bottle left, so I nabbed it.

If it sounds a little familiar that’s because it’s the cocktail accoutrement side project of Jay Schneider and Natalka Burian, the owners of Elsa on the Lower East Side, a great spot where this past cold winter  indulging in their multiple hot-toddy list was something I deemed necessary for survival until spring.

Making grenadine is not such a laborious task, but trying out a well-crafted version is something I like to dabble in every now and again, especially because I really dig the cocktail the Jack Rose — applejack (preferably, Laird’s from Scobeyville, NJ, who have been making the stuff since 1780 — 1780!!), grenadine and lime juice. I ran into a friend of mine the other day who told me he’d been making good use of my book, The Architecture of the Cocktail, and that the Jack Rose had become his favorite, and I thought, great! What better reason to break out the Elsa’s grenadine? But when I went to double check the proportions of the drink in the book, I saw a huge mistake — I must have cut and pasted the directive from another cocktail that contained gin when writing up the Jack Rose, and, oof, forgot to switch it out for the applejack. Which is horrible. But, well, what would a drink with gin, grenadine and lime juice be called? Sort of a rickey, right? As it turns out, the Savoy Rickey. The dogged work of going through the entire Savoy Cocktail Book by the San Francisco-based Erik Ellestad in his blog The Savoy Stomp at least gave me a name and another grenadine cocktail to use my Elsa’s in. It’s the little things.