It’s the coffee cherry, and it will be featured in four sparkling beverages. 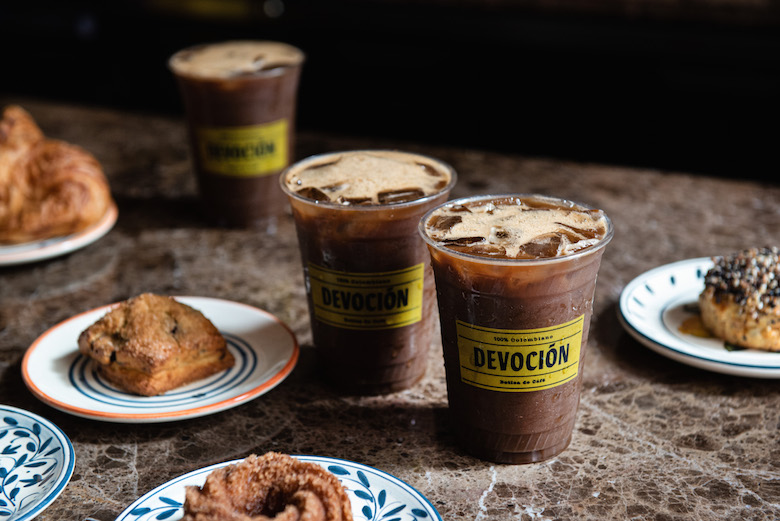 Colombia’s Devocíon coffee already has three visually stunning cafés in New York City, and their fourth will feature something new: cascara, or the coffee cherry, which will star in four sparkling beverages to be served on tap. The cherry itself has caffeine—don’t worry about not getting a fix—and the fruit will be cold-pressed to extract the water, which the company says is high in antioxidants. Flavors will include an original, ginger lemon, cherry and cassia lime. For any seltzer obsessives, it provides refreshment, bright flavor, and lightness with the added bonus of a coffee-esque jolt. The acidic flavors on offer all balance out any fears of sweetness. All of Devocíon’s coffee beverages will also be on offer, along with baked goods from Carolina Santo-Neves—one of which will always include cascara.

For those unfamiliar with the brand, Devocíon launched in 2006 and dry-mills at the source before shipping the beans to Brooklyn and Los Angeles for roasting where the coffee will be served. Their Williamsburg store will remain their New York City flagship location, but the Nomad will be a completely different experience. The 500-square-foot café will have only four stools; it was designed in collaboration with Gregory Okshetyn, Director of Studios GO, who also worked on the first Brooklyn shop.

The brand-new shop opens Wednesday, September 18, and for the first week of business, will be “pay what you like” to get all of the uninitiated hooked on what might be an unfamiliar beverage. Pop in and get a taste of the whole bean—for real.