Why More Restaurants Are Pouring Wine from Magnums

In this case, size matters. 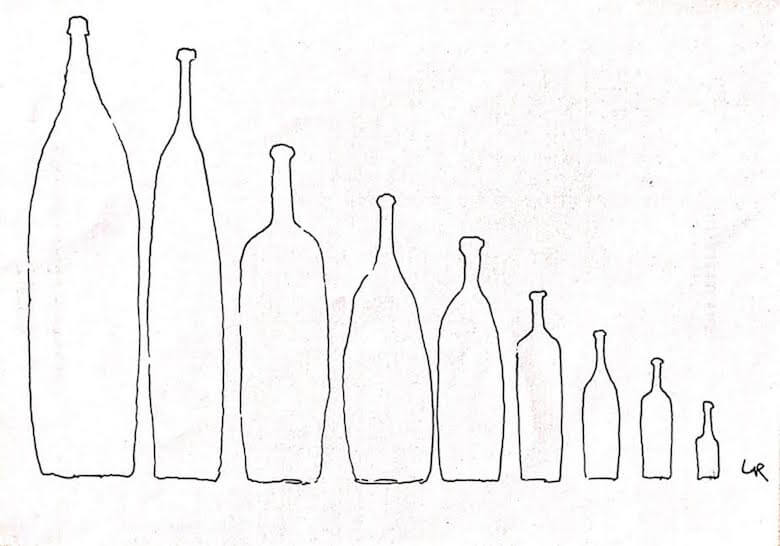 It seems that big bottles are all the rage right now among the sommelier crowd. Sure, people were pouring from large formats long before Michael Madrigale, former leader of wine at Bar Boulud and Boulud Sud, started the big bottle trend. But it was usually the steakhouse crowd peddling pedestrian swill using the appeal of bottle size.

Instead, Madrigale sought out rare and high-quality wines in large format, offering guests privileged access to tasting them by the glass. A couple of times a week, Madrigale would Instagram a snapshot of the soon-to-be-opened bottle alongside unknowing passerby on broadway. Captions such as “Feel the Herm” (Mags ‘00 JL Chave, Hermitage next to a lady sporting Hillary Clinton pins) and “Comfort like sweatpants and fanny packs” (Mags ‘11 Marcel Lapierre, Morgon “Cuvée MMXI”) tickled fellow ‘grammers and won him a massive cult following.

So why focus on big bottles, and how did these come about in the first place? Well, back in the old days (around the 1800s) when drinking was really cool, the “fifth” bottle (current day 750 ml) was said to be a modest ration for one man with dinner. Theoretically, the size of the bottle was the largest that early glassblowers could produce with one full breath; however, even in those early days and for very special occasions, wineries would place their product in impressive, oversize bottles.

Slowly, people began to realize that the wine in these larger vessels tasted much better than the wine in their tiny-bottle counterparts. Bottle sizes expanded and were named, perhaps rather appropriately, after biblical kings.

Since the wine in big bottles has less overall exposure to the effects of oxygen (through the cork), larger formats age at a slower rate. The aging process of wine in a magnum takes around one and a half times longer than in a 750ml bottle, meaning the wine tastes youthful and fresher for longer.

It seems Madrigale has now passed on the “big bottle” torch to other sommeliers around the city. Here is a list of places fully embracing the large-bottle pours.

Places to go big in the city:

Cote (Flatiron District)
All magnums by the glass, all the time. As the beverage director here, I believe going big doesn’t have to be pricey: Pours start at $12 per glass, ranging from the crunchy fruity-fresh Domaine de la Prébende Beaujolais, to cult classics like Tempier rosé and Veuve Fourny Champagne. This is perhaps the most extensive list of large-formats by the bottle, with over 100 offerings starting at magnums and skyrocketing to Salmanazars (9L equivalent to a full case of wine)! All of your friends are here from Lapierre, Foillard, Allemand, Tempier, Ente, Raveneau and more.
Big Bottle Price Range: $12–25 a glass, $65–6,000 a bottle

Beasts & Bottles (Brooklyn Heights)
The only master sommelier in Brooklyn, Alexander LaPratt is all about being a big fish in a small pond. Here he offers five wines out of magnums by the glass like Albariño and Beaujolais, as well as a good amount of large formats by the bottle. A large bottle doesn’t mean a large price-tag: The lip-smacking Lagler Grüner Veltliner Federspiel Burgberg magnum is only $90. Other tall and handsome bottles include picks from producers like Olga Raggault, Réne Rostaing, Raspail-Ay and a Jeroboam (4.5L equibalent to six bottles) of Château de Beaucastel.
Big Bottle Price Range: $8–14 a glass, $90–1,500 a bottle

Nomad (Midtown)
It always seems appropriate to go for the best at this luxurious Michelin-starred restaurant in midtown. For large formats, this is not the place to pinch pennies. Sure, it might be pricey, but it feels so good. Dive into their impressive array of Champagne in magnums like Vouette et Sorbée, Krug, Bérêche and older vintages like the 1976 Philipponnat Clos des Goisses (fresh as a daisy). The wine director, Thomas Pastuszak, demonstrates fully just how fresh big bottles keep with a large sampling of older vintages. The still wine in magnums is enough to make even the most restrained sommelier go nuts. Save up a few paychecks, because this will be worth it. Some highlights include Roulot, Dönnhoff, Mas de Daumas Gassac, Domaine de la Romanée-Conti and Noël Verset.
Big Bottle Price Range: $100–7,000 a bottle

Wildair (Lower East Side)
Funky and fresh seem to be the theme here. This downtown cool neo-natural wine hot spot is brimming with big bottles. While the wine list isn’t that extensive, almost half the offerings are out of magnums. Try underrated favorites like the smokey and honeyed Mark Angeli’s “La Lune” or the lively Cantina Giardino rosato from Campania. Here, going big is no big deal, which is what makes it so cool.
Big Bottle Price Range: $70+