We talked to the folks at Good Nature Farm Brewery and Taproom for their tips on balancing beer and booze. 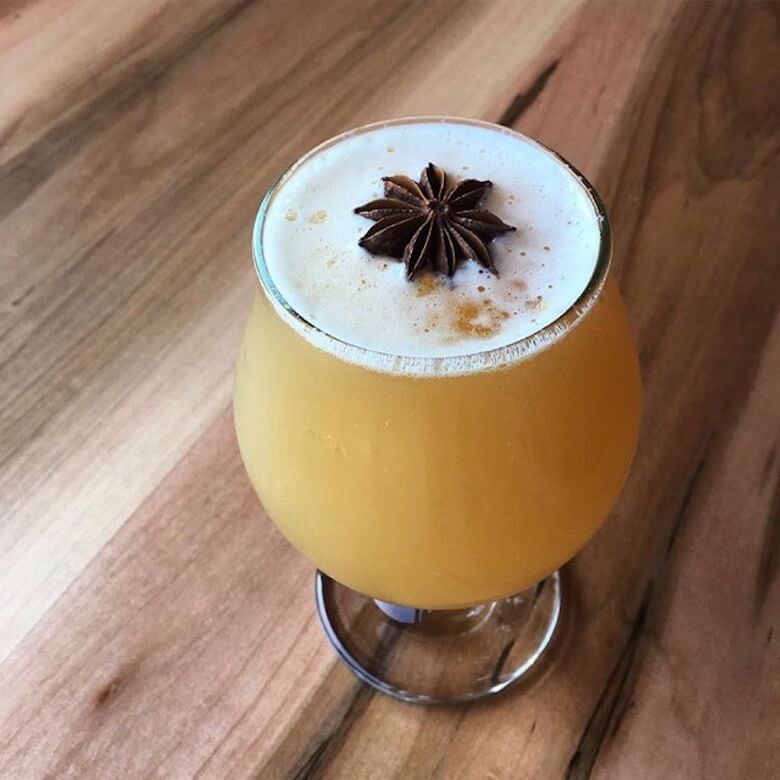 At the Good Nature Farm Brewery and Taproom in Hamilton, New York, they call their bartenders “beertenders.”

In Good Nature’s early days, the law prohibited the brewery from using liquor in its drinks. Whalen’s Dr. Soos (Smoked Orange Oatmeal Stout) is a fermentation-only cocktail. Beertenders take a torch to a cedar plank and toast the wood, filling a pint glass with smoke. They rub an orange slice around the rim of a tulip glass, plop the fruit in the glass and pour nitro stout to the rim.

The Annie Beermosa features Annie, an Imperial IPA. “She’s citrus-forward, has a nice sweetness, not overly bitter,” Blackmore says. The cocktail has pineapple and fresh orange juice. The juices underscore the IPA’s sweet, creamy qualities. Because juice kills the brew’s head, beertenders add a float of coconut cream with lime juice. “It looks like the head of the beer.”

These days, Good Nature’s beertenders get to mix with booze. By law, farm breweries must use only NYS farm-labelled spirits. Carter’s Good Nature Bourbon Snap features Old Home bourbon. “It’s still a little bit young,” Blackmore says, “because they’re a new operation.” Bourbon and spiced simple go in a tulip glass, and are topped with Tough Cookie, an aromatic rye IPA. “It’s full-bodied, because it’s brewed with lactose sugar.” The syrup and bourbon bolster that richness.

The drink is more potent than it tastes. “A regular bourbon snap is made with soda water. The beer is 6 percent and the bourbon’s bourbon.”

Whalen’s Non-Stop Mojo has Life of Reilley Distilling vodka muddled with fresh lime and mint, topped with the house session IPA, Nonstop Hop Onslaught, and served over ice in a tulip glass.

A strong bartender has what it takes to create outstanding beer cocktails. “Just like what makes a good craft beer, what makes a good cocktail is balance,” Blackmore says, and adds, “Make sure that your spirit-to-beer ratio is right.”

There’s no one-taste-suits-all answer to questions about what flavors go with beers. Hops can taste “like anything from citrus fruit to tropical fruit skunk to pot.”

Yeast strains, sweeteners, hops, malts, roasts … Beer is complicated. “Whenever you’re adding additional flavors, be sure you’re not drowning the flavor of one thing or another.”

Blackmore contemplates a couple of familiar brews. “Guinness is a little roasty, with a creamy mouthfeel … A touch of raspberry might brighten it up, and cut through the creaminess.”

“IPAs are citrusy and tropical. Throwing orange into IPAs makes sense, because it brings out those tropical flavors, cuts the bitterness and brings out out the sweetness.”

If you want to go deep with hoppy knowledge, ask a brewer whether you can come and learn. Good Nature won’t be the only brewery good-natured enough to say, “You’d be welcome.”

Otherwise, pick a character-rich brew and start mixing. Beer cocktails can be playful, complex, and interesting: good ways to stretch your skills and put unexpected, delightful drinks on the bar.