“I threw up my culture into that glass,” says Bronx-born Darnell Holguin.

At Fifty in the West Village, bar manager Darnell Holguin turns out Latin-influenced cocktails to match chef Luis Jaramillo’s take on New American cuisine—and he knows what he’s doing. The Bronx native has been working behind the stick since he was just 18 years old. “I had no experience whatsoever. I was fresh out of a two-day course,” he says. “I got to make a martini for an older person who’d clearly been drinking them forever and he said, ‘Best martini ever.’” From there, he was hooked, and he’s worked both on the private circuit—bartending the release party of Junot Díaz’s The Brief Wondrous Life of Oscar Wao—and at bars such as Mamajuana Café, the now-closed Theater Bar and Donatella, Bathtub Gin, and now the slightly hidden Fifty.

From the Fénix to the Market Gin & Tonic, garnished with whatever herbs looked best that day, he’s brought a singular style to the menu. In no cocktail is that singular style more present than his Bacardí Legacy Competition entry It Was All a Dream!, which won the east coast competition and will take him to Germany next month for the global finals. It combines the herbal profile of classic Dominican drink Mamajuana with his passionfruit take on breakfast beverage morir soñando—and, of course, there’s the Bacardí 8. As part of the competition, he has to brand and market this cocktail to as wide an audience as possible through social media, guest shifts at different bars and even T-shirts. “It’s kind of the same thing as when you’re promoting that one big party,” he says. “In this case, the party is the cocktail.” 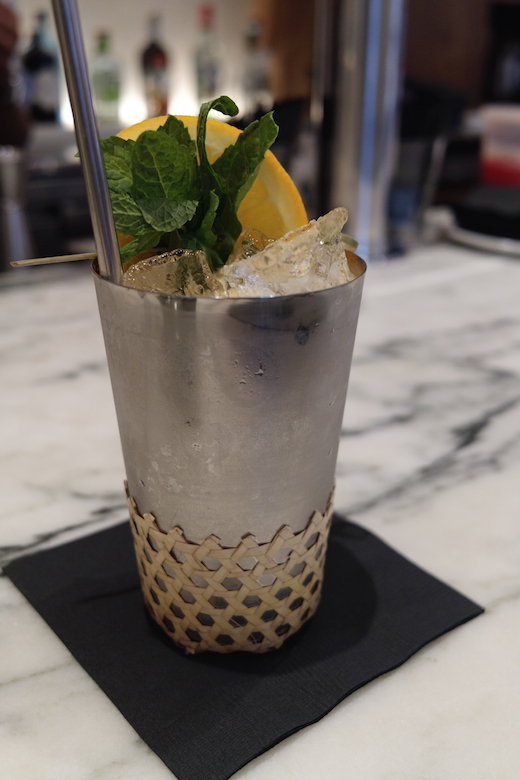 The It Was All a Dream is served the way it might be in the Dominican Republic.

Above, watch him make the passionfruit condensed milk he uses in the drink, along with the cocktail itself and two others from the Fifty menu. Here, we talk to him about his inspiration and whether cocktail competitions are important.

Edible Manhattan: What was the road to making a cocktail that wins?
Darnell Holguin: That’s a great question, because I sure as hell didn’t see it coming. I would say that what I think did it with this is very much the story behind it. If you consider every cocktail that’s ever gotten footing in history, there’s something that ties to it that makes you connect—whether it came from a hotel that had a certain guest who influenced it or something else.

When it comes to making an award-winning cocktail, you want to go with things that relate to you. Everything in this drink is literally everything I grew up with. It’s got the morir soñando component; it’s got the Mamajuana component; it’s got the cup with the netting around it for a coaster. I literally, for lack of a better term, threw up my culture into that glass. I find that that’s probably what gave me a strong edge. It was more relatable to me.

EM: How important are cocktail competitions in this industry?
D.H.: There’s an irony to that question for me. When I started in the cocktail scene, I thought they were a joke and a little too inner circle. It could very well have been the case about 7 to 10 years ago, but I definitely see how important they are now. It wouldn’t drive me to do it if they hadn’t gotten to the level where they are. They legitimize us. It used to be, back in the day, if you didn’t tell your parents you wanted to be a lawyer, you’d be disowned. If you told them you wanted to be a bartender, they’d be like, “Get out of here. That ain’t gonna happen.”

Although it’s still a new concept in many parts of the world, it’s a position that’s revered. It’s coming back full circle to where it first began, where the bartender was honored for their ability because they understood it goes beyond the singular drink—it’s the hospitality, it’s the connections you make with people. That’s one of the things that drives me in this industry, and providing that experience for guests, ultimately, is what makes that position so much more important. I always say that you could feed a family of 4 for under $30 at home—but that’s an entree at a restaurant. Why do you spend that money? To gain an experience. So when you go into it as one of the people that can provide you that experience, it just goes to a whole other level. So cocktail competitions are a necessary thing for our industry. They legitimize us; they create a profile.