The Pope of Gramercy Tavern

After 18 years, wine maven Juliette Pope is still just a proverbial kid in a candy store. 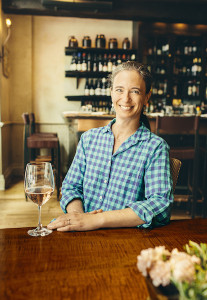 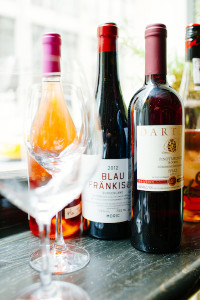 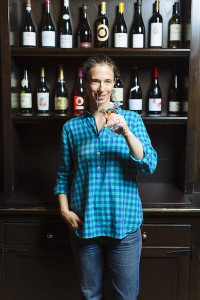 Juliette Pope weaves ninja-like to the back of the bar at Gramercy Tavern, through a room chockablock with be-vested servers and staff, their shiny fork tines scraping white plates during the afternoon pre-service meal, the daily staff ritual to break bread and hear updates to get on the same proverbial menu page before the front doors fly open.

She moves quickly, silently, careful not to distract attention from general manager Kim DiPalo’s pep talk. In her left hand is a tall glass of hot black coffee; in her right, she effortlessly holds three 750-milliliter bottles of French rosé securely between her fingers, transporting them from one side of the long, epic bar to another.

“The thing everyone’s talking about is service — people notice the tiny details we take care of by instinct,” opines DiPalo from a high-stool perch in the front Tavern as the staff finishes their last bites. Which is, of course, exactly what Pope, beverage director for Danny Meyer’s farm-sourcing gastro gem for over a decade and inarguably one of the most intuitive, consistent arbiters of great wine this city has known, is showing by example. Pay attention.

Clad in jeans and flip-flops that somehow make none of the thwack-thwack sound for which the ubiquitous summer footwear is known (“I guess I’ve just gotten used to getting things done quickly and quietly,” she says), Pope remains part of the well-oiled hum that is Gramercy Tavern — until, that is, it’s her turn to talk and all eyes and ears perk to attention.

The servers nod, scribble notes, raise hands to ask questions or add bits of information they happen to have, which she thoroughly answers and welcomes with an approachable ease of knowledge that makes you wish Pope was your own personal wine source on speed-dial.

“There are four changes to the wine list today!” Pope pipes, clearly, cheerfully. As she runs down the wines, she breezily lists provenance (Chablis), vintage (“2011 was small; 2012 was smaller — it sucked for them! It’s amazing we have any at all!”), flavor profile (“Salty, briny, intense!”) and other less fact-driven observations (“I dare you not to like this wine — it’s so delicious!”), conveying both the evidence and the excitement behind them in a way that is both informative and, well, exciting. You do get jazzed about the wines when she talks about them.

The servers nod, scribble notes, raise hands to ask questions or add bits of information they happen to have, which she thoroughly answers and welcomes with an approachable ease of knowledge that makes you wish Pope was your own personal wine source on speed-dial. If only what she knows and how she presents it could actually be bottled itself, that would be liquid gold.

“Facts are one thing,” she offers. “But the personal side sticks more.” If you happen to see the list of new wines she keys up for the floor staff as an addendum to the meetings, you see that same attention to detail. She gives pronunciation (for Gagnard, “gahn-YAR, no ‘d’”), history (“one of the North Fork’s oldest wineries (1978)”), visuals (“a crazy moonscape, rocky, barren, cratered, really rather otherworldly”) and a zillion other facts and incidentals that help her staff remember and learn the extensive, terroir-driven wine list (“‘climat’ = Burgundian speak for ‘cru’ which = vineyard”). It’s all because she wants them to be able to clearly explain what’s in the glass and, of course, uphold GT’s rep, but it’s also spawned from the way she learned — on the very floor upon which she still swiftly treads today.

For over a decade, Pope’s been GT’s guru of the grape, the behind-the-scenes doyenne of drinks shaping and growing a wine list (and spirits and beer and, as of late, cider, too) that is one of the best-respected in the city: Hundreds and hundreds of bottles reaching as much to the Old World as it does to the New and, when possible, New York-centric (her first entry in the pinot noir section of the wine list: the 2011 Red Tail Ridge from the Finger Lakes — boom!). She is the torchbearer for wines that speak of place and people, something she’s grown closer and closer to the longer she’s spent with a wine key practically as a third hand.

Pope’s beginnings are not exactly unflinchingly direct nor the result of zig and zag happenstance. Rather a steady progression and natural symmetry (along with a few leaps of faith) guided this former line cook to become one of city’s more vital tastemakers. Although, if you tell her this, she’ll make a face, possibly roll her eyes, and tell you she has no formal training. That is, if you consider the School of Paul Grieco — GT’s former beverage director, owner of Terroir, former partner with Marco Canora in Hearth and the raconteur of riesling — informal.

Grieco’s passion for riesling first nudged Pope away from the stove and into the cellar. “It was my first week sitting in family meal and a Mosel riesling landed in my glass,” she remembers. “I was transfixed!”

Still, it would take a few years before that aha moment translated to a full-blown career. Pope, now 47, grew up in Atlanta with a keen interest in the culinary arts fostered from Julia Child’s “you can do this, too” introduction to French cookery at home. In 1994, she and her younger brother, an artist, set their sights to “go live with the Yankees!” landing on the Upper East Side, where the siblings shared an apartment. Pope signed up for the six-month certificate course at the then-named Peter Kump Cooking School, now the Institute of Culinary Education, where Child herself was a guest instructor, along with other home-cook luminaries like Marcella Hazan and James Beard (a thread that turned out to be quite fitting in Pope’s attraction to wine: She is entirely self-taught).

“Juliette is awesome,” says chef Mike Anthony. “She puts education first and foremost, and she’s dedicated in a way that goes far deeper than anyone I’ve ever seen in the business.”

After completing her studies at Kump, she landed a job as a line cook at the restaurant Zoë on Prince Street. It was there she met a dashing Swiss sous-chef named Ralf Kuettel, who would one day become her husband as well as the owner of Chelsea’s Trestle on Tenth. After Zoë, Pope was hired in 1996 by Danny Meyer’s partner Michael Romano to cook at Union Square Café.

By December 1997, then-Gramercy Tavern executive chef Tom Colicchio would bring her on as a line cook — a move that would, in effect, change the direction of her career, although she had no way of knowing that eventually she’d be mind-melding a wine list with the menu of current chef and co-owner Michael Anthony, a working relationship that has blossomed into one of the more complementary food-drink alignments in town. (“My palate leans to leaner, ripe, bright fruit; little oak; wines that aren’t intervened with. It’s similar to Mike’s cooking — we’ve become very naturally aligned.”)

Indeed, it wasn’t the kitchen that would cleave her to the climes of Gramercy Tavern. It was a Côte-Rôtie seminar that Grieco was giving to his wine stewards and that he invited her to attend where she found her message in a bottle. “He put a strong influence on me,” says Pope. “I got hooked.”

After that, she began her transition from back of the house to front, working as a waiter, a cellar rat, in charge of grabbing bottles during service and keeping the incredibly large stocks of vino organized. She moved up to a manager position, and when Grieco left for Hearth, to assistant beverage director under sommelier Karen King. In less than a year, King would move on and, in 2003, Pope would become beverage director, making Gramercy Tavern the place of her first and only job in the wine world, and the one in which she remains in to this day.

Those early foundations honed the way she still works. Like Grieco did with her, all floor staff taste during pre-dinner sessions; she gives monthly wine classes; created a no-fail, intensely intricate, three-page, step-by-step opus to becoming a great cellar rat (which ends with her trademark encouragement: “THEN GO HAVE A GREAT DAY KNOWING THAT YOU HELP MAKE THIS ALL GO and GO MORE SMOOTHLY FOR EVERYONE WHO WORKS HERE :>); and fosters their individual interests in regions, grapes and winemakers, keeping her eyes peeled for wine geeks in the making.

“It’s really ‘be your own somm’ here,” she says of the general knowledge imparted to all servers on the floor at GT. “I try to give them the kind of information to bring it to life.” Which they do. There is an overall passion that spills forth; they are close to the topic at hand and it’s a direct result of attendance in the church of Pope.

And while she has become well known for her celebration of local wine, proximity isn’t a guarantee. “I don’t do local for local, or organic for organic,” she says. “But if the wines are good and they are local, then I’m going to support them.”

One might argue that, while she’s not a pushover, this kind of insistence on high quality has helped in a fundamental way far and beyond the Flatiron; Pope’s standards raise the bar for our region as a whole, putting great New York wines — not simply local flag bearers — in front of the broad international audience that packs tables daily here. Not every vintner can get past Pope’s palate, but when they do, the bar is raised. Perhaps, more than she even realizes.

“I care less about the thing,” she says picking up an empty wine glass, and gently shaking it back and forth like a rattle, “than how it got there. It’s about the choices the winemakers make and do I agree with them. That’s what I can share.”