On the Lower East Side, Heads and Tales

You may get to know Kevin Heald by the jaunty fedoras he sports, but you’ll get to love him for the jam-packed, American-focused beer and cheese he sells in his aptly named Lower East Side shop, Malt & Mold.

You may get to know Kevin Heald by the jaunty fedoras he sports, but you’ll get to love him for the jam-packed, American-focused beer and cheese he sells in his aptly named Lower East Side shop, Malt & Mold. 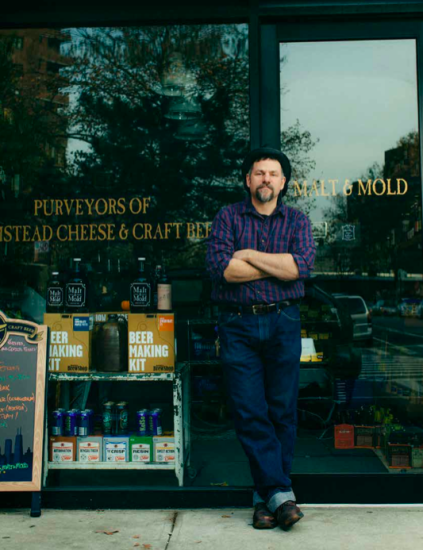 Friendly with growlers. Kevin Heald keeps local brews on tap and on the shelf.

Heald moved to the neighborhood nine years ago and from the start wished for a little spot to buy great bread, cheese and charcuterie. After the Great Recession hit, he decided to leave behind a 20-year career as a headhunter and be the one to build the suds and curds spot he’d dreamed of. He opened Malt & Mold in May 2012, stocking the shelves with home-grown artisan ingredients.

Heald’s buying philosophy starts with local love. Some producers, like A&B American Style, the makers of a small-batch chili sauce, live right around the corner. Others, like Brooklyn-based Granola Lab, first came to the neighborhood via the Hester Street Fair. Taste matters, but he’s most interested in stories—which he can recount, one after the other, as he walks around the tiny store.

Artisan ingredients may have been the inspiration, but over time Heald began devoting more of the shop to beer. His selection focuses on American, with many local brewers on the shelves and on tap: Kelso is famous for its limited-run sours; Grimm Ales, out of Gowanus, makes a brand new beer every month; Rockaway Brewer is a one-man show that opened a year ago in Astoria. He also stocks Bad Seed Cider, which he grabbed on weekly Greenmarket runs before the farm-based brand got picked up by a distributor.

At Malt & Mold’s weekly tastings, Heald taps at least three to four kegs and a few bottles, sometimes serving 10 to 12 varieties at a time. He planned a Grimm tasting three months in advance, buying up a new keg with each release until he had several to serve.

As for the mold, Heald curates a selection of domestic and imported cheeses, some of which star on a daily sandwich special. There’s no menu, just a recitation from Heald of what’s on offer. Right now, his favorite is ‘Nduja spread, a spicy salami paste traditionally from Calabria, served cold on an olive roll ($2) or toasted hot with a slab of mozzarella ($3), which he claims tastes just like a “melted, spicy sloppy Joe.”

Heald has to wear a hat while making the food, but there are no health department hairnets for him. His shop’s philosophy extends to his headwear, too—hence the stack of fedoras alongside the cheese cooler, made by a very local artisan: His wife, a milliner, works downstairs in the same building.