In Chelsea, a Craft Condiment for the Artisanal Set 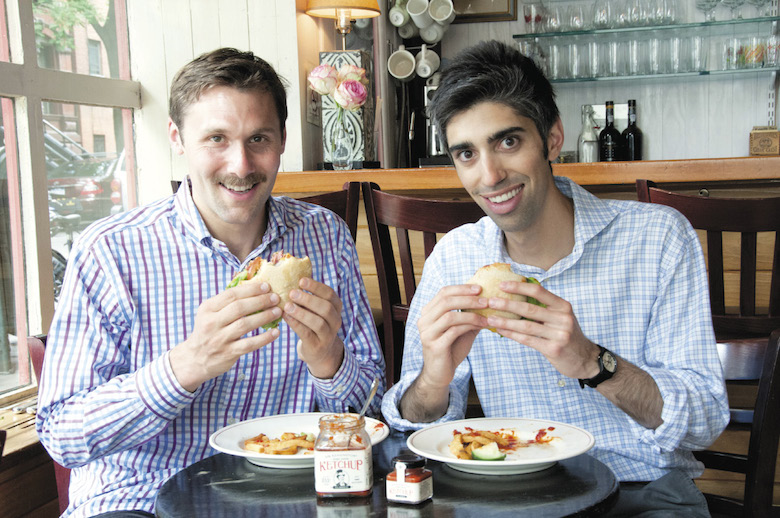 If you believe what you read on labels, Sir Kensington’s Gourmet Scooping Ketchup was invented by a top-hatted British dandy who custom-created the condiment some 300 years ago, when Russian Empress Catherine the Great requested a sauce that stood up to her steak. But while the mustachioed, monocled mascot winks from every jar, truth be told, the legendary inventor never existed. Instead, the four-year-old Chelsea brand was named after one of the co-owner’s cats.

Ketchup traces its roots to 19th-century Britain, where an ancient Asian fermented fish goo called kecap was beginning to morph into the sweet-and-sour sauce we now slather on fries. But Sir Kensington embodies a modern ideal: Take an everyday processed product and make it from scratch. Instead of the corn syrup, tomato concentrate, dried herbs and citric acid, Mark Ramadan and Scott Norton (they run the company from a little office on West 14th Street) use vine-ripened pear tomatoes, agave, honey and cane sugar, apple cider vinegar, coriander, lime juice, allspice and real onions. Perfect for pairing with a pastured porterhouse.

Now that there’s a chef-run mayonnaise factory in Brooklyn, really fancy ketchup probably seems inevitable. But Heinz has long had the market cornered, as readers of Malcolm Gladwell’s 2004 New Yorker article “The Ketchup Conundrum” might recall. In 2008, when Norton’s friend Brandon Child became the latest entrepreneur to notice the untapped niche—“How many types of mustard are there? How many ketchups?”—the two helped found the most recent group of gourmets to take on Heinz, at least in area codes like 212.

Norton’s other partners—Ramadan and Win Bennett—began as his college buddies at Brown, all in business-minded majors. They mixed up batches and hosted blind-tasting bashes, creating their fictional character to garner interest from their collegiate colleagues: “Sir Kensington invites you to a ketchup party!” The winners grew into the two they market today: regular and spicy, the latter seasoned with jalapeño, cilantro, scallions and cayenne.

After college, Ramadan and Norton took gigs in business consulting and finance, respectively, quitting their day jobs in 2010, when Sir Kensington became nearly as popular with hipsters as the moustache many share with its mascot. You’ll now find his square jars in Sur le Table, Williams-Sonoma, Whole Foods and, in single-serving form, at upscale hotel room service for the Andaz, the Soho Grand and the Four Seasons.

It also graces the famous Pat LaFrieda short rib–brisket blend patties griddled up at the Little Owl. “It complements my burger,” says chef Joey Campanaro. “Their ketchup stands up to it,” adding “I believe in the product. It’s genuine and honest.”

Well, except for that legend on the label.

To listen to the author’s radio interview with Sir Kensington’s founders, go to EdibleManhattan.com.