(Bag)Pipe Dreams: Celebrating a Scottish Tradition in the Heart of Manhattan

For Robert Burns Night, hoist the haggis and dress to kilt. 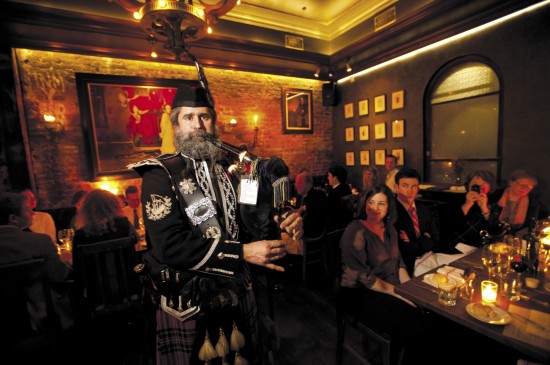 But just you wait. The celebration—held each January 25 in honor of the 1759 birth of Robert Burns, Scotland’s most famous poet—has all the hallmarks of a holiday we can totally claim as our own. Consider the basics: copious quantities of Scotch, a feast featuring a giant stuffed sausage called “haggis,” the chance to wear funny clothes (tartan, kilts, maybe even bagpipes), spontaneous song and general revelry, all delivered as an ode to an artist, rather than some long-forgotten battle or contentious religious event.

Burns himself is a remarkable figure: The 18th-century composer of “Auld Lang Syne” and “A Red, Red Rose” was a celebrated ladies’ man, a professed liberal, a hopeless romantic, a proud boozer and a fan of the peasantry.

“He was a rock star in his day,” says Donal Brophy, the Scottish-born co-owner of a slew of U.K.-themed hot spots here in New York, including Whitehall, Highland and the recently shuttered, tartan-covered Lower East Side cocktail lounge called Mary Queen of Scots. To his countrymen and women, Brophy says, Burns Nicht suppers are like Thanksgiving dinner—meaning everybody has one, from the big companies in Edinburgh that rent banquet halls for their employees, to extended families who gather by the fire at home.

“The women would cook a big feast with haggis and roasts and winter veg,” he recalls in his own smoky brogue, noting that there is always “lots of poetry, and lots of whiskey. It’s a very spiritual night.”

Scottish expatriates—and their lucky friends—tend to gather for the occasion no matter where they live, and Burns Night Suppers are now celebrated in homes, taverns and restaurants from Beijing to the Bronx. Like a handful of other Manhattan spots whose owners have ties to the British Isles (the Soho House, St. Andrews Scottish pub in Times Square, the Upper East Side’s Caledonia Pub and Keen’s Steakhouse), Brophy’s businesses host several Manhattanized Burns nichts each year, where if you don’t end up feeling spiritual, you didn’t consume enough spirits.

At last year’s fest at Mary Queen of Scots—which boasted a table with at least three versions of hipster tartan, including a flannel, a three-quarter-sleeve puffy coat and a black and red hooded poncho—you could even opt for a course-by-course pairing of Compass Box Scotch, a wee dram poured along with your steak and ale pie, your green salad scattered with chopped scallion and dill and your big bowl of cullen skink, the Scotch smoked haddock, potato and onion soup that’s so wonderfully thick you could practically eat it with a fork.

For most of the uninitiated, a whiskey or two is probably a wise prerequisite before the Burns supper’s main course of haggis, the rustic grain- and offal-filled sausage the Scots like to call a savory pudding. When traditionally prepared in Scotland, it’s a sheep stomach stuffed with sheep’s heart, liver and lungs, onion, oatmeal, suet, spice and salt, the whole thing boiled for hours in stock—once the food of Burns’s beloved poor, it’s now practically the national dish.

(Though it must be made without the lungs here in the States, thanks to the USDA, offal fans find its nutty flavor and coarse texture are still a covetable experience. Brophy’s sausage is supplied by a Jersey game company called Scottish Wild Harvest, which has found that beef liver is a perfect substitute for the flavor and texture of sheep lungs.)

On Burns Nights around the world, it’s always served with neeps (Scottish slang for turnips) and tatties (potatoes) and, if you’re really following protocol, the haggis is “paraded about,” as Brophy puts it, accompanied by a bagpiper. It’s then traditionally sliced by a giant saber, anointed with a cup of Scotch and left to sit at attention while a piper tootles a bit of Burns’s famous melodies and your host recites his hilarious 1786 masterpiece Address to a Haggis. (“Fair fa’ your honest, sonsie face. Great chieftain o’ the pudding-race!”)

Brophy himself typically does the honors at his establishments, dressed in a kilt and leading in a sharply dressed bagpiper with white gloves, spats and impressively long braids through the dining room, who’s likely to be paparazzied by the flashing camera phones of a dozen alumni of Scotland’s University of St. Andrews.

Once your haggis is finally served, the time has come to pass around a few crumpled pages of Burns’s more popular poems, whose slightly dour tone somehow adds to the merriment. More knowing patrons—like Elaine Mitchell, who immigrated from Scotland a decade ago and now lives downtown—will queue up to take their turn to recite. “I always attend a Burns Night,” she says, “we take it really seriously.”

Admittedly, most Manhattan suppers don’t quite follow the traditional model she’s used to back home, which requires a formal roster of speeches, including a toast to the poet, a toast to the “lassies” who prepared the meal and then the lassies’ own rebuttal.

“I know it’s breaking with tradition,” said Brophy last year, taking a sip of Scotch and adjusting his kilt, “but this is the Lower East Side of Manhattan, so I don’t care.” •

Each January 25th, lovers of sausage and Scotch raise a dram to the poet Robert Burns. Photo Credit: John Taggart.