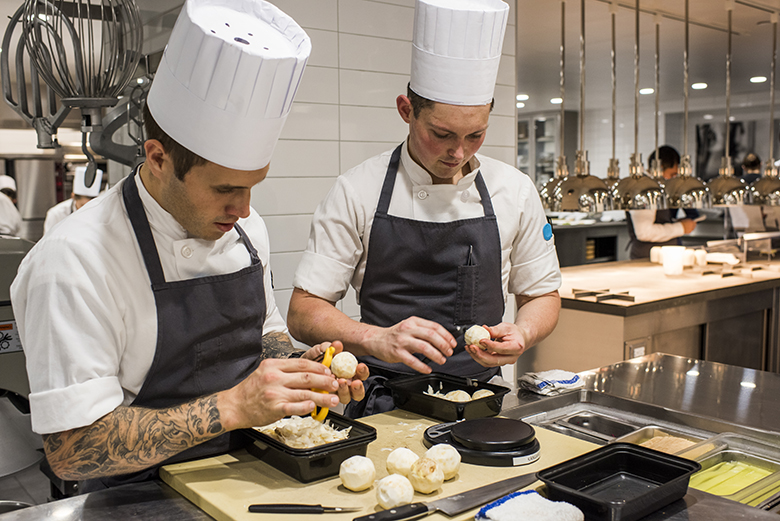 Chef Matt Jozwiak, an alum of the Make It Nice restaurant group, bet his life savings on an idea: to solve two seemingly intractable city problems—restaurant food waste and hunger—at once.

New York has always been a city that facilitates unlikely connections, especially when there’s food involved.

In July 2018, for example, attendees of the James Beard Foundation’s Chefs & Champagne event in the Hamptons ate Montauk scallops prepared by Untitled’s Suzanne Cupps and Mussels Provençal from Alex Baker of Yves. Meanwhile, food-insecure residents in Brooklyn (unknowingly) enjoyed some of the same shellfish—transformed into a summer seafood chowder made with leftover tomatoes and shallots from Made Nice, potatoes from the Grill and celery from Eleven Madison Park. 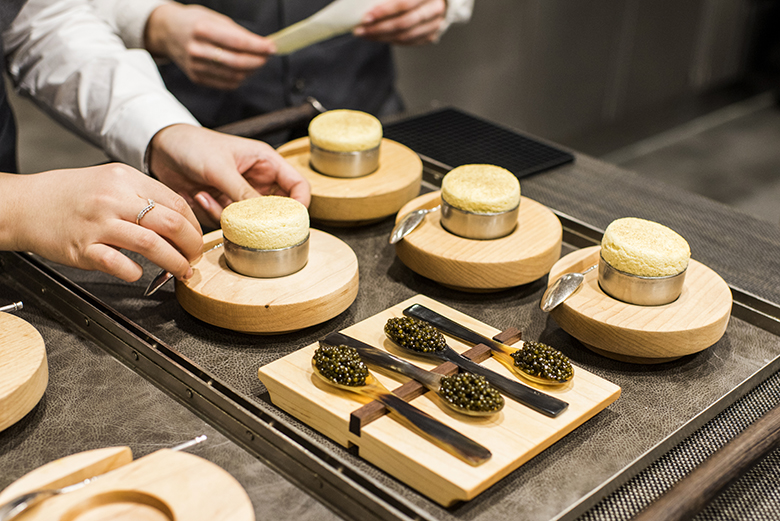 Chef Matt Jozwiak made that happen by betting his life savings on an idea: to solve two seemingly intractable city problems—restaurant food waste and hunger—at once.

While multiple barriers have prevented restaurants from donating leftover food to the organizations that stock food pantries and soup kitchens in the past, Jozwiak saw the two sides as puzzle pieces that could be rearranged to fit together into a solution—and he got to work on Rethink Food NYC.

“I wasn’t going to spend two years trying to raise 50,000 bucks so people would believe in my idea,” he says. “I was like, ‘I’m just going to get this thing done.’ We see it as a very solvable issue.” 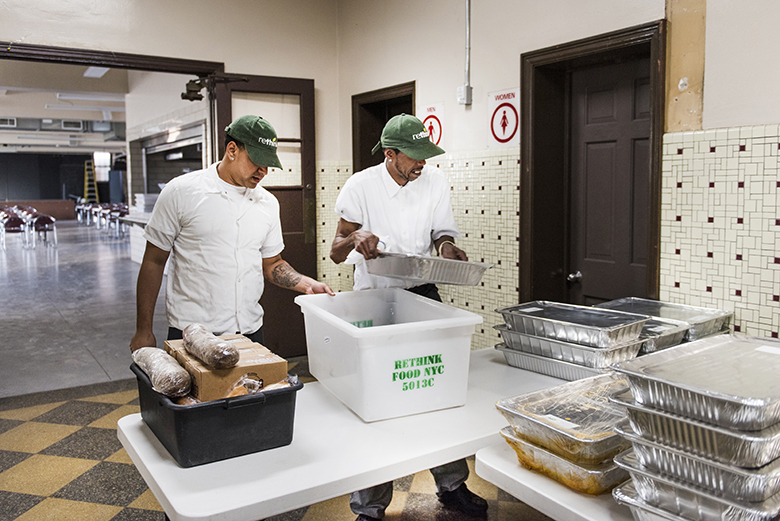 While multiple barriers have prevented restaurants from donating leftover food to the organizations that stock food pantries and soup kitchens in the past, Jozwiak saw a solution—and he got to work on Rethink Food NYC.

Jozwiak, who is originally from Wisconsin, has culinary credentials that seem to impress everyone but himself. He started working in kitchens in Chicago and then moved to Europe, where he worked at restaurants in France before making his way to the famed Noma in Copenhagen. When he got to New York in 2014, he joined Daniel Humm and Will Guidara’s Make It Nice restaurant group, working at the NoMad Bar before moving to Eleven Madison Park (EMP) as a cook (and later as a private chef to billionaires).

Throughout his career he was involved in different do-gooder projects. In New York, he did charity work teaching kids cooking skills, and he started to talk to the people at organizations working with low-income communities about their challenges related to promoting healthy cooking. 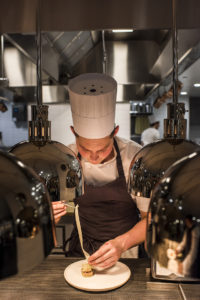 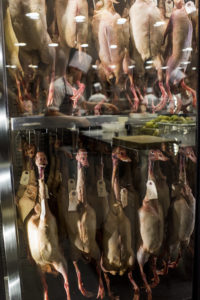 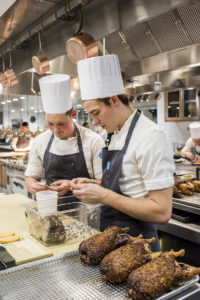 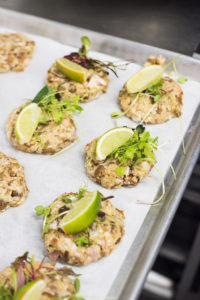 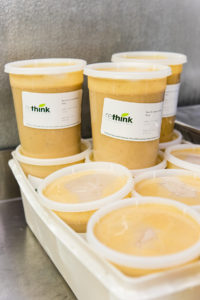 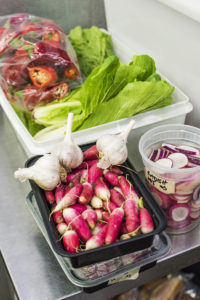 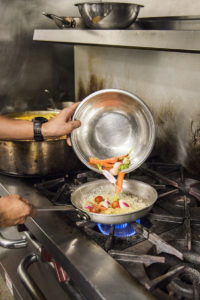 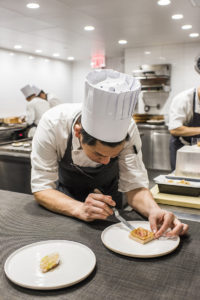 “They stopped me and they were like, ‘We don’t have any food, like, at all,’” Jozwiak remembers. His mind went to everything that went to waste at the end of one of his restaurant shifts. “I really started thinking about the problem and asking ‘Why can’t we move food? What are the issues? What are the challenges?”

The Food Bank for New York City is the city’s largest hunger-relief organization, and Janis Robinson, the director of corporate engagement (which includes food sourcing), says the organization rarely works with restaurants. The bulk of their donations come from government agencies and private companies like food distributors and grocery stores, and most of the food is made up of raw ingredients like produce or shelf-stable products like canned beans and rice. “We certainly get a lot of [restaurant] people reaching out to us regularly,” she says, but the Food Bank model, in which food gets warehoused and then redistributed later, doesn’t usually allow for highly perishable cooked food. City Harvest, New York’s biggest “food rescue” organization, uses a similar warehouse model and primarily collects and distributes fresh produce from markets and grocery stores (although it does redistribute some prepared food). 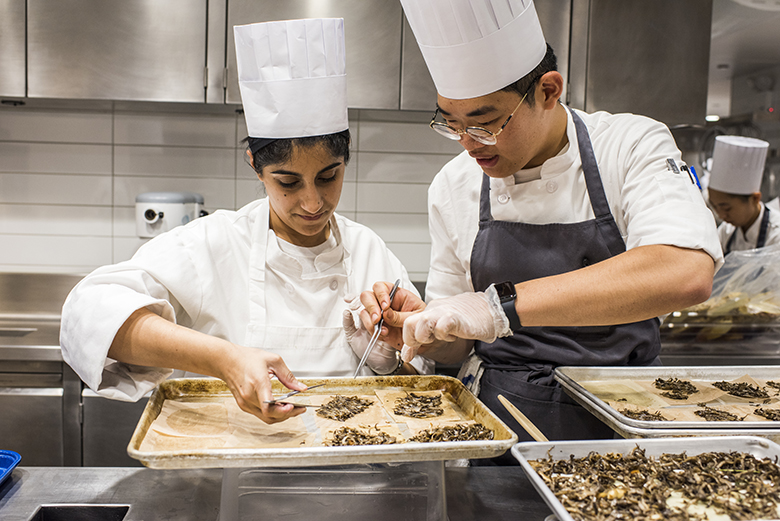 The leading organizations, Jozwiak found, were not set up to handle restaurant food and didn’t necessarily understand how the operations worked, and chefs were often afraid to donate because of fears about food safety. And the quality- and convenience-obsessed nature of the industry meant that unless someone changed an entire city’s dining expectations, there would always be waste. (A few restaurants do operate low- or no-waste kitchens, but the approach is rare.)

“There were so many of us for so long who had been frustrated by what we were able to find a home for when it comes to the excess food we have in our kitchens,” says Make It Nice co-owner Will Guidara. “There’s a ton of it, and no matter how you look at it, there’s always going to be a lot. We don’t like to 86 things in the middle of service, and that comes with a price.”

The issue is so prevalent, in fact, that Brooklyn Council Member Rafael Espinal introduced legislation in May 2018 intended to make it easier for restaurants to donate food to hunger organizations. 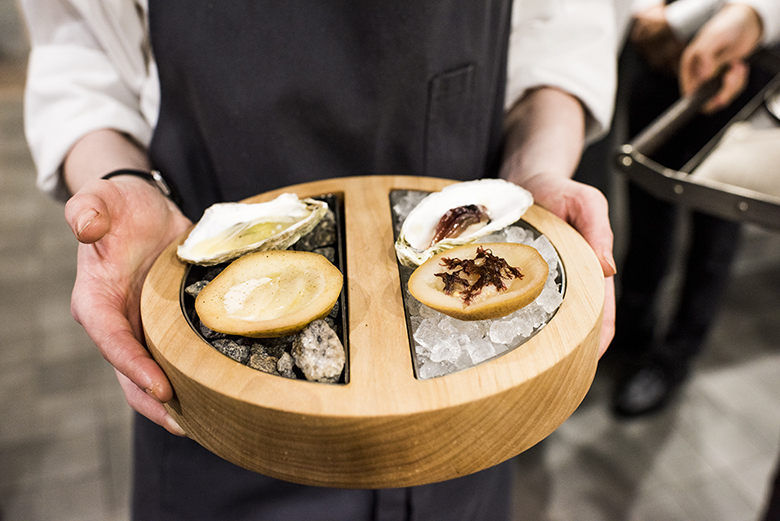 The leading organizations, Jozwiak found, were not set up to handle restaurant food and didn’t necessarily understand how the operations worked, and chefs were often afraid to donate because of fears about food safety.

When Jozwiak presented the idea for Rethink to Guidara, he says Jozwiak’s “passion for it was infectious.” Guidara brought the concept to his business partner, chef Daniel Humm, who “quickly agreed it was the right step to take.”

In late 2017 into early 2017, Rethink started running pilot operations at EMP, the NoMad and Made Nice, and official operations kicked off in April 2018. So far, the organization’s accounting puts the number of meals served at close to 18,000.

Here’s how it works: Rethink currently collects food regularly from the three Make It Nice restaurants, plus the Grill and Gramercy Tavern and urban farms like the Brooklyn Grange, Gotham Greens and Square Roots. (Businesses get tax breaks for donating, which provides an additional incentive.) 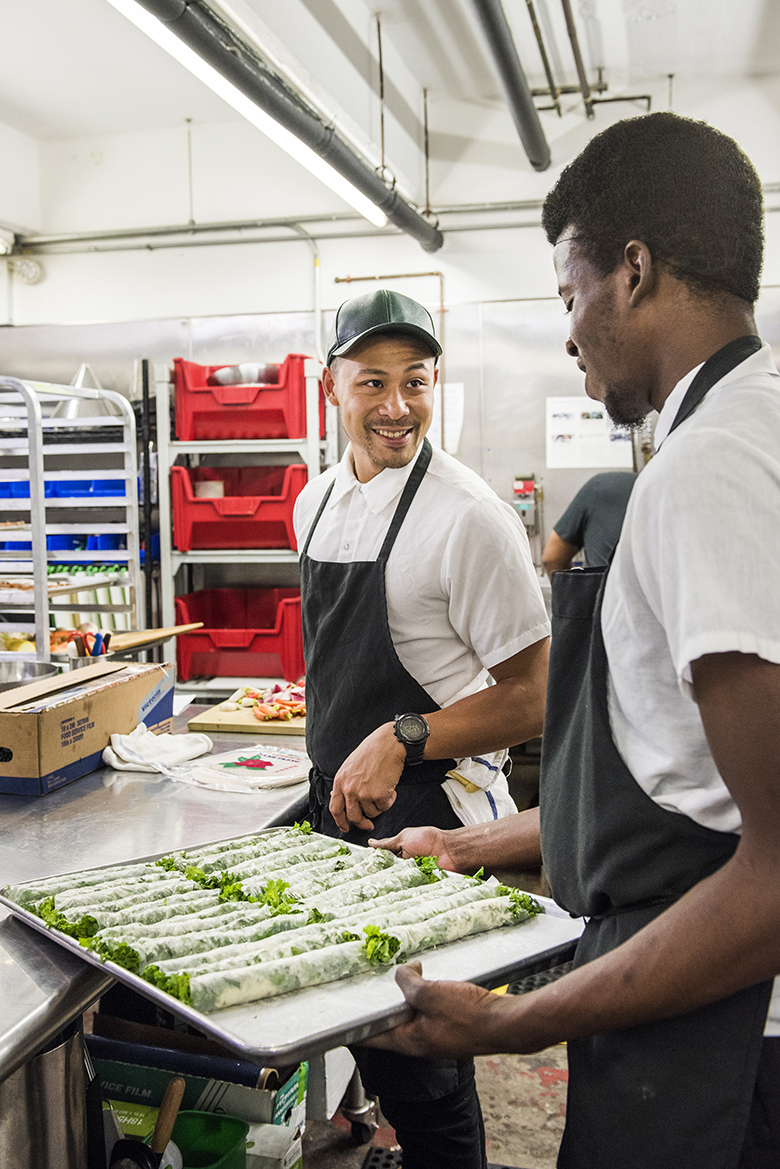 Bonbite is also a key partner because its team shares kitchen space (and therefore, often, resources) with Rethink. In the kitchen on a September afternoon, six chefs were busy at work. One chopped greens that had come from Local Roots. A tub of turnips, beets and radishes from the Brooklyn Grange sat waiting to be prepped steps away from containers labeled bacon trim, shrimp sauce and cilantro aioli.

Rethink’s truck currently picks up from restaurants at the end of service four days a week, and since the chefs have no idea what they’ll be getting, every day in the kitchen is an exercise in creativity. “None of it makes sense separately—a couple of fish, cooked grains from another place, pea puree…” Jozwiak says. “We take it and make something new.” Think “avocado pesto chicken with couscous” made with corn and avocado from Made Nice, fennel from EMP, basil, green puree and lemon juices from the NoMad, and chicken from Made Nice and Bonbite combined.

“The key,” by the way, “is to cook it,” he emphasizes, since doing so effectively extends the shelf life of the food so that it can be distributed safely. It also takes the onus of cooking off of soup kitchens, which mostly rely on volunteers to turn donated ingredients into meals. 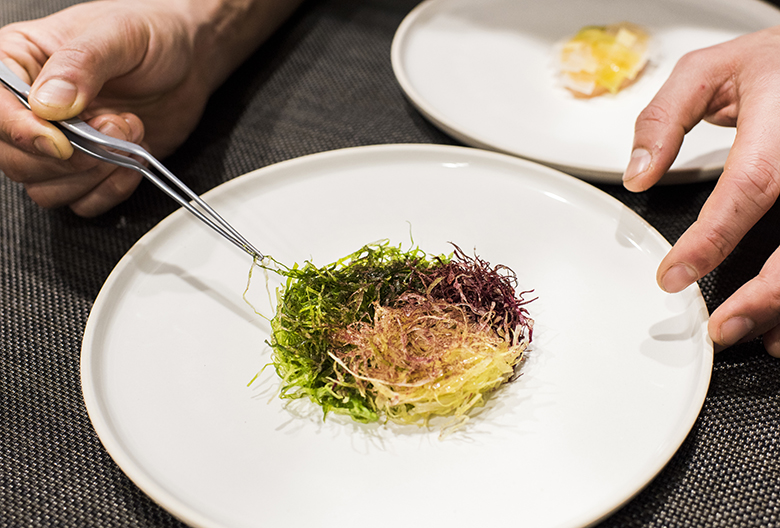 Rethink’s truck currently picks up from restaurants at the end of service four days a week, and since the chefs have no idea what they’ll be getting, every day in the kitchen is an exercise in creativity.

Another challenge hunger charities deal with is the quality of food donated, Robinson, of the Food Bank, says. “We’re working to ensure that the 1.5 million New Yorkers we serve every year, that not only do they have food, but that it’s good, nutritious food,” she explains. “Our big thing is providing protein and produce.”

Rethink’s food comes from the city’s best, quality-obsessed restaurants and from farms within miles of its kitchen. And having chefs turn it into thoughtful, balanced, delicious meals counters one of the biggest criticisms often lobbed at food rescue operations: that giving poor people the rich’s leftovers is an undignified, paternalistic approach. “It’s about dignity. It’s about treating people with respect,” Jozwiak says. “Not just dropping stuff off, like ‘Here’s a case of squash and some eggs and a watermelon. Good luck.’” 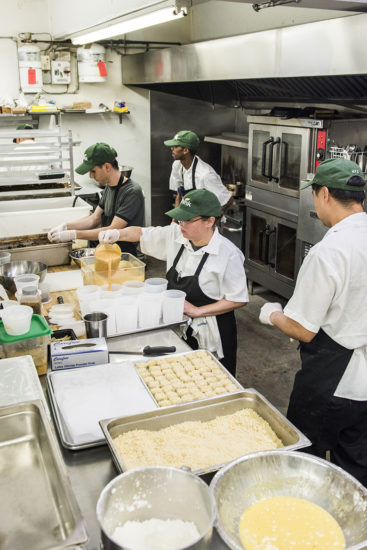 North Brooklyn Angels executive director Ryan Kuonen says that the fact that Rethink works with hunger organizations like hers—that already understand and are responding to community needs—is key. Kuonen also says the care Rethink puts into how and what it donates is unique compared to other organizations and the variety, flavor and “flair” in the food further accentuates that care. And at the end of the day, her organization, which has volunteers cook meals made from a combination of donated and purchased food out of a kitchen in Williamsburg and distributes them via food truck, just needs more food. “Literally, there have been days when I was like, ‘We don’t have enough food,’ and then Rethink’s stuff arrives,” she says.

Before then, however, he’s focused on bringing on new restaurants and especially corporate cafeterias, which will dramatically increase the amount of donated food Rethink has to work with, and on expanding to where the organization is serving a million meals a year.

“It’s about dignity. It’s about treating people with respect,” Jozwiak says. “Not just dropping stuff off, like ‘Here’s a case of squash and some eggs and a watermelon. Good luck.’” 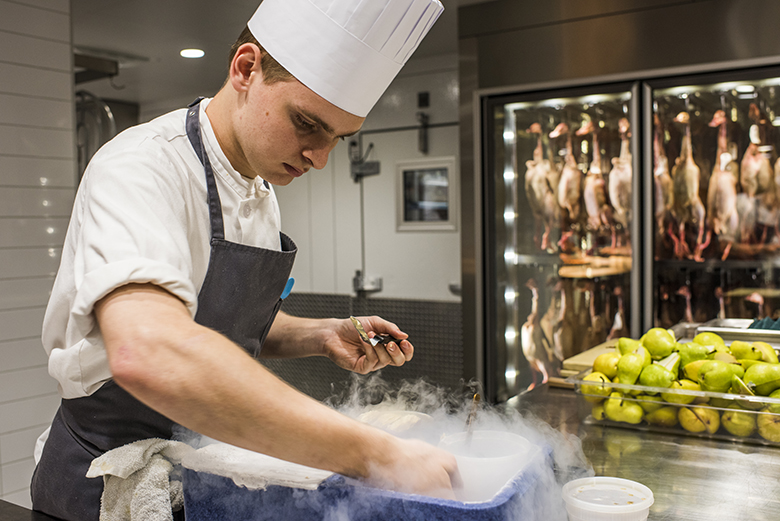 “The key is to cook it,” he emphasizes, since doing so extends the shelf life of the food. It also takes the onus of cooking off of soup kitchens, which mostly rely on volunteers to turn donated ingredients into meals.

Guidara, for one, has no doubt Jozwiak will get there, and he emphasizes how relatively simple Rethink made it for Make It Nice’s kitchens to reroute their leftovers from the trash to the truck. “What we’re doing is not that much harder than what we used to do; it’s just a few extra steps,” he says. “It was a pretty smooth transition, and then that just becomes the new normal.”

Plus, employees in his kitchens quickly rallied around the opportunity to do something good, he says. “Cooks start to get inspired, you know?” Jozwiak says. “We’re kind of breathing life into an industry that’s going through a dark time.”