At Rouge Tomate, “Healthful Cocktails” Are Not an Oxymoron

At Rouge Tomate, where gleaming two-toned hardwood floors, modernist banquettes and glowing tomato-red panels make everyone appear to radiate inner balance, you can — quite literally — drink to your health. 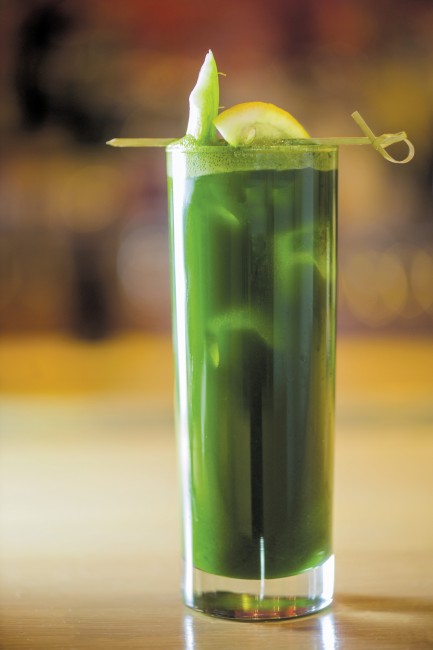 At Rouge Tomate, where gleaming two-toned hardwood floors, modernist banquettes and glowing tomato-red panels make everyone appear to radiate inner balance, you can — quite literally — drink to your health.

The specialty of the house, which opened in 2008 as an extension of Rouge Tomate Brussels, is health-giving food with an emphasis on fruits and vegetables, a menu that goes way beyond your garden-variety salad lineup, including dishes like an heirloom tomato and watermelon panzanella salad or guinea hen done three ways with fresh red plum reduction, foie gras and crispy sweet potato leaves.

A nutritionist on staff vets every recipe, looking for ways to lower sugar, salt and refined grains or add flavonoids that will unlock nutritional synergies. Founder and CEO Emmanuel Verstraeten has even developed his own certification and consulting arm called SPE, which focuses on nutrition and sustainability.

Yet despite all this, the vibe is less one of spa cuisine denial than of pleasure-seeking wellness. And that applies to the beverage program, too.

Lepeltier’s mandate from Verstraeten, however, was not just to put together a dynamite wine list, but to add a strong bar program, too — something the Brussels restaurant, which opened in 2001, lacked, and that may initially have seemed at odds with a health-focused menu. Lepeltier, who came on in 2009, explains, “What I was hired for was to expand the philosophy of the food to the drinks.”

She has done exactly that. 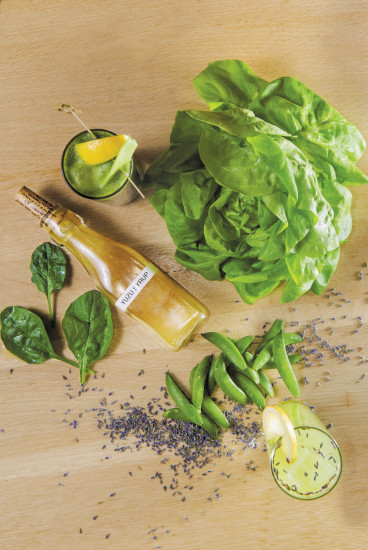 To put produce at the center of the program, physically and philosophically, the restaurant’s first floor was designed around its juice bar, a small square room painted (naturally) tomato red. There, juicer Michael Vancott works full-time creating vegetable and fruit juices and purees for both kitchen and bar.

Lepeltier assisted the restaurant’s first head bartender, Rainlove Lampariello, in developing a number of juices and nonalcoholic cocktails that express the essence of Rouge Tomate’s health-giving refinement: the Amber Palmer, a mix of jasmine and black teas, rosemary-grapefruit juice, mint and seltzer; and the Green Tornado, a gorgeous puree of tarragon, spinach, basil, butter lettuce, mint and lemon.

The program preceded the latest wave of the juicing boom, and offers way more than your standard juice bar fare: “These are nonalcoholic cocktails made to be as precise and balanced as any other cocktail,” says Lepeltier. “Most are stirred or shaken, using jiggers to measure, and meant to be drunk by themselves or paired with food. It’s not like just blending three different fruits.”

Rouge Tomate always offers 10 to 12 mocktails. Last year the runaway favorite was the Green Spring, a concoction featuring fennel, basil, lime, lavender honey and a cap of passion-fruit foam. Like many of Rouge Tomate’s mocktails, they can be easily converted into a cocktail, in this case with a shot of mango-infused vodka. 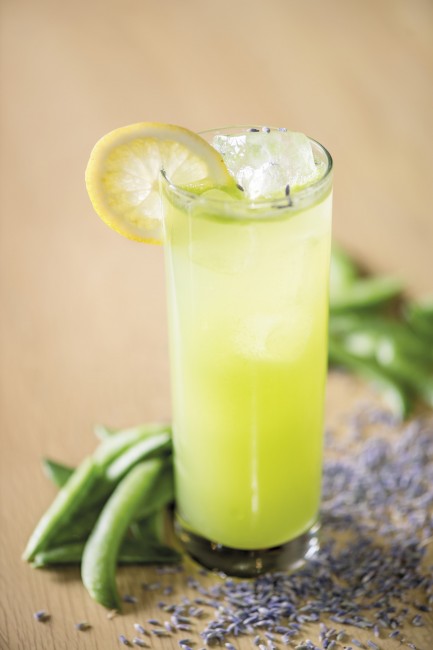 Working with the freshest ingredients isn’t as easy as opening a bottle. Molina says pulp made from strawberries that are “perfectly sweet and delicious” in May will have to be amended with lemon and sugar by August. Maintaining texture from drink to drink is also tricky, notes Moore: “It’s hard to get a good, consistent plum puree, because ripeness and sweetness can vary. It’s so fibrous, almost like baby food, so it can be hard to work with.”

But the benefits are well worth the trouble. The arrival of spring, says Molina (who stepped down from the head bartender position but is still involved with the restaurant), brings such an onrush of exciting produce that it can be overwhelming.

“There’s so much to play with,” he says. “Sometimes we’ll do 20 different drinks and then change them again. We’re lucky because whatever the chef [Jeremy Bearman] is using, we can use, too.”

Moore cooks the peaches down to a concentrated consommé, which becomes the base for the Peach Pit Sour, which includes peach pit-infused Tuthilltown bourbon, lemon juice, bitters and egg white. The result is a beautiful, refreshing and frothy coupe of summer. 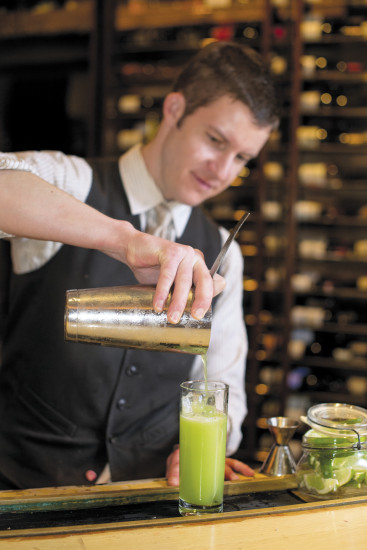 To your health. A nutritionist on staff vets every recipe, and head bartender Zachary Moore’s mixed drinks taste as fresh as a spiked salad.

“We’re always trying to expand our field without being too esoteric,” explains Lepeltier. “In the end the drink needs to be good. Before we put one on the menu we’ll give regulars a shot, and say, ‘Do you think this is a crazy idea?’”

One crazy idea that quickly found favor is Moore’s Streetcorn Cocktail, inspired by his youth spent in Mexico City and its classic street food of grilled corn with lime, cayenne and Cotija cheese. His cocktail interpretation of this taste memory combines corn milk and mescal, rimmed with chipotle salt.

Yet there’s one thing that Molina, who grew up in palmy Ecuador, feels is missing at this urban oasis: “If you’re drinking a roasted rosemary Amber Palmer,” he says, “it would be great to have it outside. But we do our best; we have big plate glass windows.”